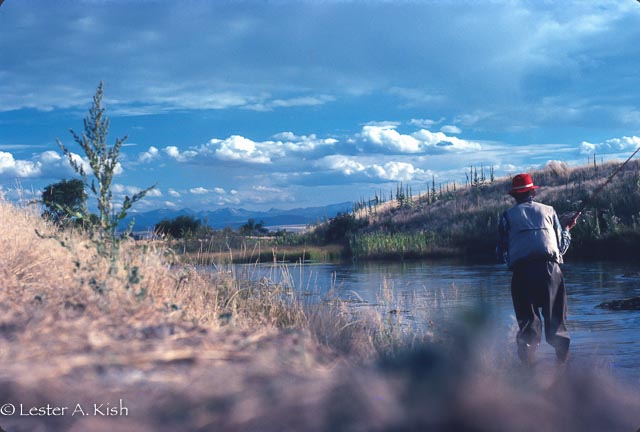 We're looking at an old film photo from the late 1970's.  Kodachrome, just like the Paul Simon song.

This is Montana, before the river (and everyone else) ran through it.

The camera was set on self timer and rested on streamside rocks.

A selfie if you will.  I was way ahead of todays kids and their cell phones.

More nimble and quicker then, I had ten seconds to run for the water while making the resulting shot look like I was fishing.  I think that I was shooting around twelve feet of line.  Backwards.

Back then my dry fly arsenal consisted of a few crudely tied Humpy's.  Some folks called them Goofus Bugs.  For me, matching the hatch was pretty simple.  Open fly box.  Ponder.  Which one?  Hmm...   I think I'll pick a Humpy.

Graphite rods were in their infancy.  I couldn't afford one made of bamboo by Orvis. So, the fly rod was fiberglass.  I built it.  Now really, who "builds" a fly rod?  I just bought the blank from Dale Clemens, one of the manufacturers of the day.  I did wrap the guides though, and incidentally, still have the rod.  The cork rings in the handle have shrunk. The glue in between the rings hasn't, thus leaving an interestingly textured handle.  Now, fiberglass is again en vogue.  Come to think of it, I'd better start looking for my bellbottom jeans, and my hair.

Gear has come a long way.  For the better?  Who knows.  There's just more of it.

It was called a flannel shirt.  I wore it, even in summer.  I sweated a lot, but the bugs couldn't chew through it.  Now it's called retro.  Pants were the aforementioned bellbottom jeans

How about that red crusher hat?  I inherited it, wore it for a few years, then a horse did me a favor and stepped on it.  Looking back, I see it was a conservation tool.  I was ahead of my time.  It tipped the odds in the favor of the fish.  They could see that bobbing red topped head of mine.  No wonder they were so spooky.  I was pretty stylish though.

There were no sling packs, backpacks or fanny packs.  Just a vest, now retired, complete with a pocket stained by a melted tin of mucilin.  I read about mucilin in The Curtis Creek Manifesto.  If it was good enough for Sheridan Anderson, well by God, then it was good enough for me.  I never used any of it, but I had some just in case.  By the way, I still own the vest.  Its "new and improved" replacement also has a tin of mucilin, waiting to melt and stain a pocket.  Mucilin, it's good stuff.  Maybe it'll help me float if I fall in.