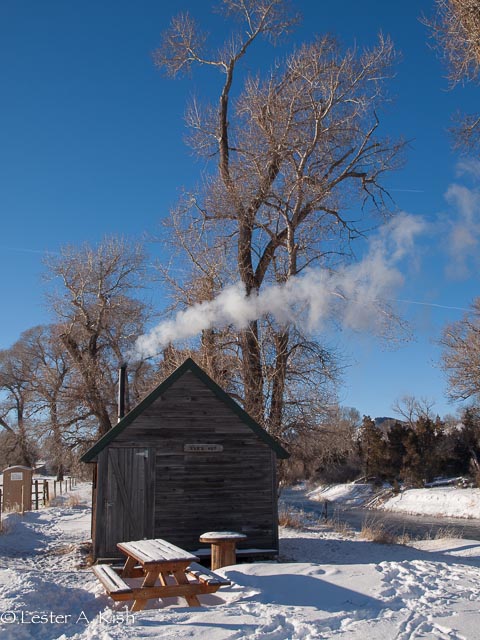 I've gotten to the point where fishing has become an increasingly less important part of fishing.  At least that's what I keep telling myself.  There must be something to it as I keep going fishing without engaging in the act.  Indeed, I'd spent the previous four creek visits dawdling, reading, hiking and taking photos.  The trips weren't a complete loss, I may have dozed off a time or two as well.

Remarkably, the fishing rust hadn't settled too deeply.  I got a couple out of a sheltered run. Thinking that I could handle another fish or two, I meandered downstream on the snowy deer-tracked trail. The creek, here a straightaway, was considerably more exposed.  The wind had managed to gather the proverbial steam, albeit, without the requisite warmth.

Whitecaps rolled on the normally placid stretch. There was no need to worry about spooking fish.  Ripples from wading?  A jet boat would have generated less surface disturbance than the gale that blew.

I slipped into the water anyway, braced myself, and held the rod tight. The Thingamaboober bobbed and dipped into and out of the wave troughs.  Line control? How about rod control?  Most times I could only hold the rod with one hand, the other was pressed to the top of my head in order to keep my hat from blowing to Livingston.  All that kept me from exiting the creek was the fact that my feet were mired in the midstream muck.

Meanwhile, the boober bobbed.  I alternately lifted and dropped the rod while trying to get short trackable drifts. I caught another fish, a credible rainbow that fell for the schizophrenic movements of my fly.

I don't carry a watch.  Hell, I don't even own one.  But, my internal clock said that it was time to quit.

Tippet snarled and chilled to the core, I extricated myself from the mud and trudged back to the hut.

Perversely, all I could think about was summer, the PMD hatch, and sweat running down the inside of my waders.

I settled in and read a piece by Nick Lyons where he and friends had passed a day in a fishing hut on an English chalk stream.  The story (appropriately titled: In a Fishing Hut, from the volume Full Creel) was largely about the days dining, which is what one writes about when the fishing or conditions are not worth writing home about. And he wrote about butter sandwiches.  There were cucumbers too.  I had no cucumbers and so settled on the butter and rolls.  Butter sandwiches.  Admittedly, they were quite good.

I'm fattening up for the PMD hatch. 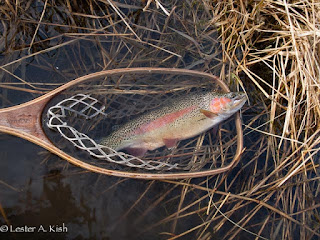 Jim said…
Butter sandwiches! I used to eat peanut butter and butter sandwiches. "Fattening up for the PMD hatch." I'm going to use that line all winter, for things like Reeces binges, Ben and Jerry bashes, and of course, butter sandwiches. I can wade it off come late spring. Maybe eat some salads to cancel it out. Happy New Year. We're on the downhill slide now . . . on paper anyway.
January 10, 2018 at 3:33 PM

rivertoprambles said…
A nice way to fatten up for the PMDs, Les. Being too cold to fly fish here at the present time, I feel your pain, which really isn't all that bad, is it, since we ignorant anglers always seem to have something up our sleeves to keep ourselves out of trouble when times get tough.
January 10, 2018 at 6:19 PM

Bill Trussell said…
Lester
Well another cholesterol fisherman could have joined you to enjoy the butter sandwich; these days I cheat on my cholesterol diet-------colorful bow, I fished today in 66 degree weather, so good to just be outdoors on the water again. Take heart those warmer days are on the way!!! Thanks for sharing
January 10, 2018 at 7:02 PM

Lester Kish said…
Geez Jim, peanut butter and butter sandwiches? I'm sure the butter was meant to keep the peanut butter from sticking to the roof of ones mouth.

As for the salad, I had one tonight (along with the mac and cheese).

Lester Kish said…
Plenty of snow and cold here too this winter Walt. We can always while away the days, plotting, scheming, reading, tying flies, eating, shoveling snow, procrastinating.......Heck, that should keep us busy until March!
January 10, 2018 at 10:19 PM

Lester Kish said…
Bill, 66 degrees! Now I know why you moved back to Alabama.

Cholesterol diet? Does that mean consuming cholesterol only or none at all? Only kidding. Nah, eat all you want.
January 10, 2018 at 10:27 PM

Lester Kish said…
Bob, I've been out a few times since this post, haven't fished too hard though. Still biding time while waiting for a midge hatch. I've done a little nymphing, caught a few fish, and snacked on the aforementioned butter sandwiches. As for winter fishing, I'm usually good after an hour or so on the water.

Regarding role reversal, I've often thought the same when reading a post that you or Jim have put up!
January 27, 2018 at 8:29 AM