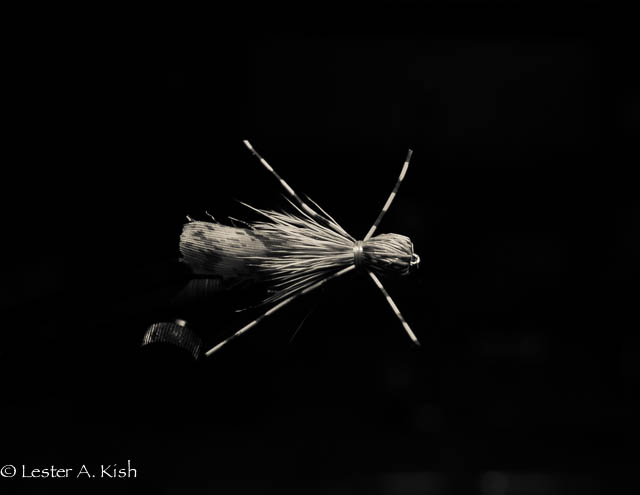 It's time to take a break from shoveling snow.  Time to dream of green grass, warm breezes and summer sun.

So what if it's winter.  It's hopper time.

Time to tie them at least.  Also  time to take a break from tying midges.  Imagine that, something big enough to see without an electron microscope.

I don't fish terrestrials much, other than the occasional beetle.  But, as far as hoppers go, this is my favorite.  Excepting the rubber legs, its all natural.  Just elk hair and turkey.

No need to reinvent the egg, so I won't.  Here are a few links which detail the tying steps excellently:

This site has animations of the tying steps.....bullethead hopper by a fellow named Derek Porter.

The main difference between the two versions is in how the abdomen is tied in.  Check them out and decide for yourself which is more to your liking.

I've tied some on Dai-Riki 270  (that's all I had, they also market a hopper hook, the 280) in size eight and twelve.  I might also try to tie a few on a size sixteen just to imitate the smaller early season instars. 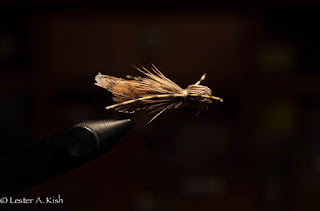 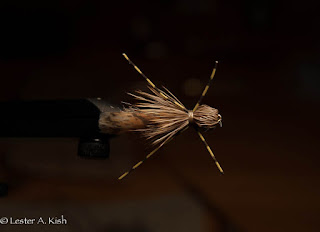 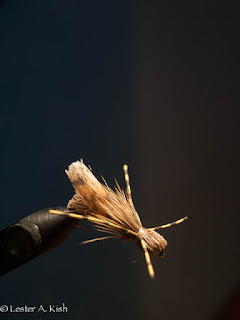 Lester Kish said…
Merry Christmas to you too Jim. And, happy tying.

As for the longer days, I'll use the extra eleven seconds of daylight for shoveling yet more snow.
December 23, 2017 at 6:49 AM

Bill Trussell said…
Lester
Great job at the vice; I can see a monster brown or rainbow nailing either pattern on one of those classic rivers or streams you fish there.
What’s the weather like there; light snow here on Christmas day? I’m already looking forward to spring as you are to fish for the rainbow on the Sipsey and of course landing those monster gills on Smith Lake.
Hope you and the family have a great Christmas and Happy New Year!!

Lester Kish said…
Merry Christmas Bill from cold and snowy Bozeman. It will be a while before one of the hoppers gets to tempt a trout. Glad you liked the looks of the pattern. Your local bluegills and bass should like it too.
December 25, 2017 at 10:17 AM

Lester Kish said…
Merry Christmas to you as well Bob. I see that it's -20 F in your area this morning. Not quite as cold here but we're running out of places to put all of the snow. Hopefully we'll get enough of a temperature break in the next couple of weeks to float a midge.

'Til then, keep tying and keep dreaming.....