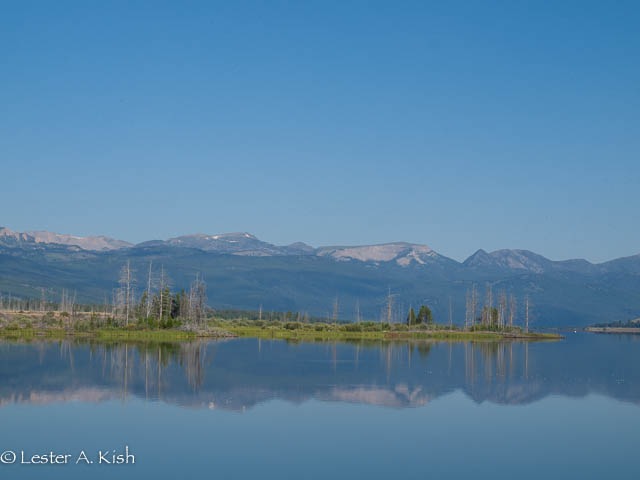 It's deliciously cool in the pre-dawn of this summer morning.  I sip coffee and hastily pack a cooler for the day.  Last night I'd packed an inflatable pontoon boat into the back of my little car along with some fishing gear.

Hebgen.  After more than four decades I was finally getting around to wetting a line. I'd rolled the thought of fishing it around in my mind for a long time. Like the Henry's Fork or upper Madison, it was another backyard piece of water that I'd neglected for too long.

I'd heard about them, seen videos.  Fish cruising, vacuuming their dinner from the lake surface.

How hard could it be to catch a few?  It was time to find out.

I hit the road early.  Driving along the Gallatin, then through the northwest part of Yellowstone on the road to West.  There was a bit of fog, the temperature dipped to thirty-six along a low-lying stretch of highway.

Out of the park and north of West Yellowstone, I turned onto gravel.

It was warm by eight, a beautiful, still, blue sky morning. Tricos lit on my car.  Soon they formed into clouds, like mist hanging over the water.  Encouraging.  Fish food.

With the pontoon inflated, I pushed off into the unknown world of gulpers.  Now, fishing from a pontoon isn't my forte.  It's merely a means of transportation.  There's just too many straps, and feet, and oars to catch and tangle fly line.  But, I cope, and mutter to myself, a lot. 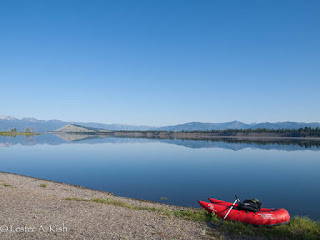 Early on, the lake surface was quiet, the rises random.  The Trico spinner fall never amounted to much.  Once the Callibaetis started to drop, the fish got a little more frisky.

It's a game of get as close as possible.  And, it's a game of watch and wait.  I can't cast sixty or eighty feet from a pontoon, so I don't bother.  And, there's no use chasing rising fish. They'll get to you, eventually, sometimes, maybe.  Usually they change direction at the last moment.

After a few hours I started to guess fish movement a little better, and I finally got a shot.

It ate, jumped several feet out of the water, then twice more.  It took line, I got it back. Just as things were looking good the line went dead.  The fish found a stump and rubbed the hook out.  It was one of the bigger fish that I've seen in years.

By late morning there were lots of Callibaetis on the water.  Predictably, more feeding fish too.  Likewise, more chances.

Sometimes I dropped the fly right onto a fish and it ate.  Other times I'd lead by several feet and they'd speed up to grab the fly.  Sometimes I screwed up and spooked the fish.  It was all in a day of  fishing and learning.

By one o'clock the lake surface became rippled.  It wasn't windy, but there was just enough breeze to complicate tracking a fly, coupled with the same funky glare that is my nemesis.  Good enough for one day, my first day of gulper fishing.

And yes, you really can hear the fish go gulp. 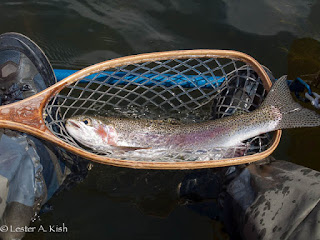