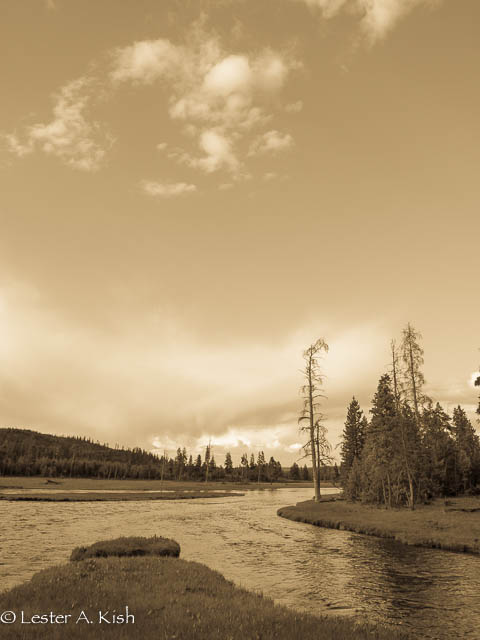 I made an impromptu stop along the Firehole River a few weeks ago.  I'd spent the morning fruitlessly poking around the Henry's Fork.  Outside of seeing one good fish porpoise a couple of times, there was nothing doing.  So, rather than wait out the day and hope for some sort of a hatch, I pulled out and headed home.  I was driving through West Yellowstone around 4 p.m. and decided "what the heck" and detoured through the Park gate.

The Madison, as advertised, was running a bit high and off color.  I continued on to the Firehole.  I pulled over, made a sandwich and commenced to watch the water.  A few fish rose sporadically.

What the heck?  Might as well fish I thought.  After all, I felt obligated.  You see, I'd tied up a dozen soft hackles a couple of days earlier.

So, I rigged up and went for a little walk.   I found a spot with fish rising in nice soft bank water.  A few white miller caddis buzzed along the surface.  Just as I was about to step into the water the sky opened up.  An errant black cloud decided right then to settle over my fishing spot.  Luckily, there was a small group of trees nearby.  I made a run for it and cozied up to the base of one.  It's a good thing that I'm skinny because the tree offered scant cover. Soon, marble sized hail bounced off the ground and pocked the surface of the river.  A little thunder and lightning added to the ambience.  "Oh sure", I thought, "I haven't even fished yet and I'm going to get fried by lightning in a meadow full of soggy buffalo turds."

Fifteen minutes later, the sun came out and acted as if it had never left.  The caddis alas, must not have survived the hailstorm as they never came back.  No matter, the fish still were in the mood to grab soft hackles.