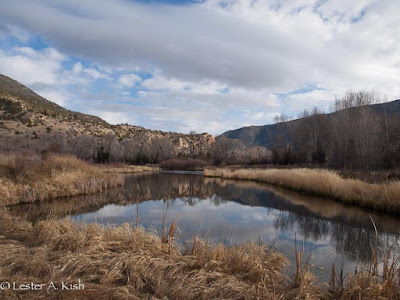 The fishing reflexes are either dulled or inappropriately heightened after a winter of accumulated rust.    The excitement of a surface take often prompts a "halibut hook set", something that is not conducive to a fruitful relationship with a fish.  A little practice is all it takes.  Soon we remember to "just lift". 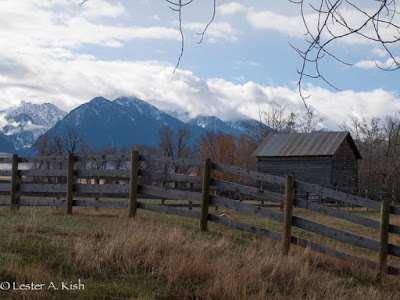 We fished yesterday.  It was a once yearly gathering on the spring creek.  The enthusiasm is still there.  Although I have noticed that bending over to net fish isn't as easy as it used to be.  I can hear a distinct creak as the knees strain and fail to bend.  No wonder we have back problems. 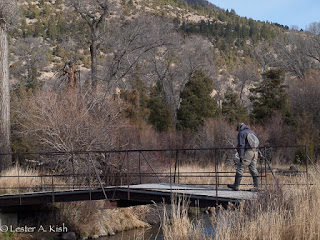 Larry and Kirk drove down from Helena and, we met for breakfast at the Western Cafe in Bozeman.  Great atmosphere and food too.  A few enormous trout that had been snaked out of local fishing holes in "days of yore" grace the walls and add to the fishing ambience.  Properly fortified with breakfast, we made the drive "over the pass".

We arrived creekside to be greeted by a few errant snowflakes.  They wouldn't last, but it would take a bit for the morning to warm.  The spring birds were back.  Their singing brought life to creekside brush that had been quiet all winter. Up high, the peaks showed new snow.  In the valley, the grass greened.  Mowing season isn't far off. 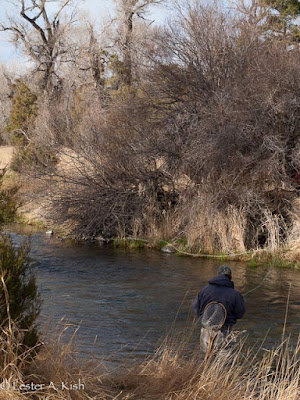 Early on, the guys nymphed or more appropriately, "wormed" up a few nice fish while we waited for the day to warm. 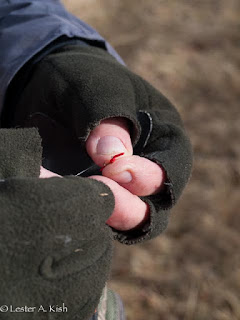 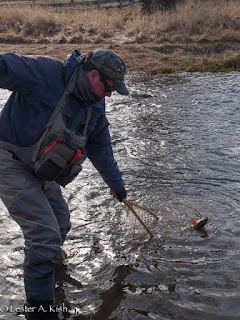 I found fish rising late in the morning.  They were eagerly gulping midges at and near the surface.   I was done in by a big brown on the first cast.  Later, a big rainbow did likewise and we parted ways when he made a straightway run. I'm inclined to believe that the 6.5X tippet raked across the teeth of both fish and severed.  It's just one of those things that an angler can't do anything about.  The fine tippet repositions itself in the mouth of the fish as it changes the direction of its run.  It doesn't take much of a nick to weaken a fine tippet.  That's my theory. Anyway, roughly half the fish ate a surface pattern, the remainder took a pupa. 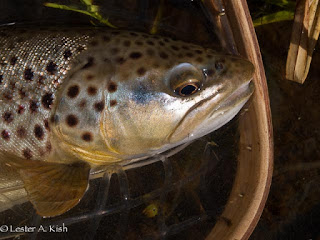 The day before I'd spent an hour at a fly shop trying to decide on a new vest.  One of the shop guys mentioned that he'd never seen anyone spend so much time on vest selection.  I told him that I'd made my decision, now I needed to pick a color!  One thing about getting a new vest is stuffing all of ones fly fishing stuff into the various pockets.  Unfortunately, like any new storage system, it takes some getting used to.  I devoted a good amount of time to hunting through the various pockets while trying to find stuff.

Regardless, it was a nice morning to sit in the grass and watch and listen to the sound of contentedly rising trout.  I tied on the same fly three times before concluding that the hook had a bad spot in the eye. Each time that I tied and cinched a new knot it broke with little pressure.  I retired the suspect fly to my fly patch.  I'm sure that I'll try tying the same fly to my leader next time I go fishing. 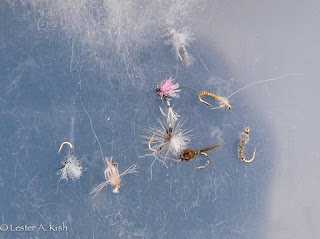 No matter.  I slid the net under several nice fish in between the two better ones that got away.

Larry and Kirk also got into the act and midged up a few before the wind kicked in. 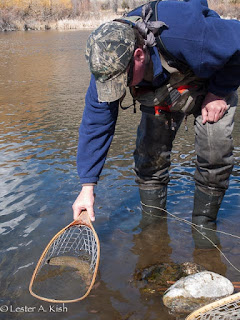 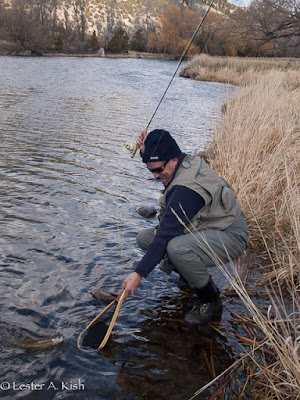 After lunch we conceded that a nap might be appropriate.  And, while we didn't nap, the fish did.  I called it a day earlier than planned.  Larry sauntered back to the hut and confessed that he'd gone swimming.  Kirk?  Well, I'd like to think that he'd caught the granddaddy of trout after I'd left. 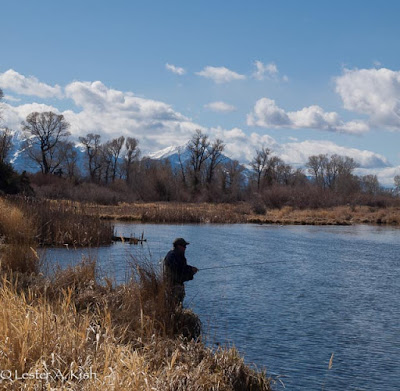