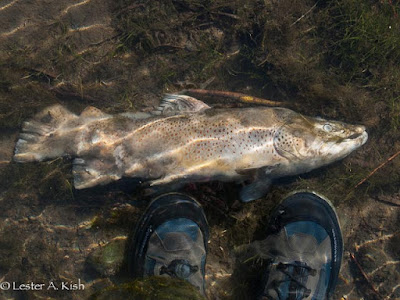 I noticed this big dead brown trout on DePuy Spring Creek a week ago.  It was longer than two of my size 12 wading boots, and would have been the fish of a lifetime for most any fly fisher.  I concluded that the likelihood of landing such a fish on a three weight, small fly and light tippet was virtually zero.  At least I got my hands on a big one, even if it was dead!

I encounter a few such big browns each fall.  They're covered with a white fuzzy fungal growth known as Saprolegnia, which attacks fish that are stressed and weakened.  Spawning takes a toll as fish jostle on redds, chasing and biting each other, removing protective mucus and thus opening the door for the fungus to take hold.