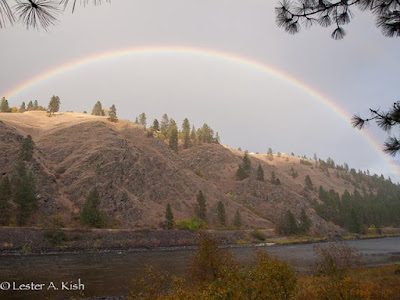 October means steelhead season, time to make the annual drive to Idaho.  I've been doing this for ten years.  I left a fog shrouded Gallatin Valley, full of hope and anticipation, as usual. After a summer of fishing with a three weight fly rod and minuscule trout flies, it was time for a change. Big rod, bigger flies.  Tippet?  No more screwing around with 6X or 7X.  It's ten pound test Maxima.


It's a simple routine.  Up early, out late, usually.  I perk coffee in the predawn dark.  The little single burner propane stove and lantern soon warm the tent and add cheer.  Caffeinated, I drive to the selected morning spot and wait for the light. It usually takes me a week of wading, casting, and occasionally falling in just to catch nothing.  So, first morning, I fish a new run.  It's showery, so I don't sling my camera.  Half way through I get a pull.  Line peels from the reel.  The fish jumps, a big one.  He's going downriver, cartwheeling, taking line, backing. Oh boy, this one's pretty special.  Several minutes into the struggle the line goes dead.  Oh well, it was fun while it lasted.  I try to retrieve line. No go, I can't get any back. What's going on?  I pull back with the rod, get an inch or two of line, grudgingly.  Repeat a few times.  I'm perplexed.  Then I get a foot.  I pull again, something pulls back.  Wow, it's still on.  I realize that the fish has wrapped my line around a rock.  I wade out as far as I dare and see the culprit.  A rectangular rock quartered diagonally, pointing to the opposite bank, river right. I pull, the fish pulls back.  We do this, back and forth, angler and fish in a minutes long stalemate mediated by a rock.  I can't believe that we're still attached to each other.  I pull, and pull, and pull.  Inch, by inch, by inch.  Then the line comes free. The fish goes nuts, jumps.  Line peels from the reel, again.


I start backing into shallower water, stepping over and slipping on the rocks.  Soon I'm knee deep, getting back line. Minutes later, I've got most of the Scandi head drawn in, then the leader loop approaches the rod tip.  The fish is opposite me, then I lead him upstream.  I can't believe that this is happening.  I let up and the fish drifts down towards me.  I grab the wrist of his tail, drop the rod in the water.  Just then a jet boat goes by.  I victoriously lift the fish. They wave, I smile.  Hell yes I'm happy. Big red stripe, red gill plate, head as big as my hand and outstretched fingers.   Then I notice the adipose.  Nice.  Gosh, what a fish.  I can die now.  The steelhead of a lifetime, mine anyway.  Of course, as I said, no camera.  Not that I could have handled the fish and snapped a photo.


I think that I should quit for the day.  But, it's still early, as in morning.  And, I quit drinking years ago.  Still, I relish the thought of a good beer.  You can have one for me.


As I exit the river I notice one wading boot is a little sloppy.  No, it's falling off.  What the heck? One of the wires on my Korkers has been severed.  No fixing this.  I head to Lewiston, find a sporting goods store, and buy a new pair.  The old ones were pretty well worn.  Still, I hadn't planned on getting a replacement while on the road.  The new pair does fit pretty good though.


A few more days on the Clearwater and it's off to the Ronde, for a change of venue. 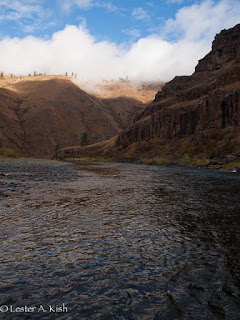 I'm in the water at first light as usual.  I get a grab within first few casts.  Three or four good pulls, then it's gone.  Disappointed, and fearing that I'd missed what may be my only chance for the day, I get out, step back upstream and resume fishing. Soon I get another pull.  It's a spirited fight, the fish jumps several times.  I carefully back out, trying to step over the big rocks. Eventually the fish is near and I close my hand around its tail.  A pretty hen.  An "A run" hatchery fish. This time I snap a few photos while she rests peacefully.  Then I send her on her way.

Later in the day I get another, bigger one, this a "two salt" fish.  No photo.


I must say that it's usually warm and dry, sometimes downright hot when I fish this area in early October.  Pleasant conditions for camping and fishing too.  This year I was not accustomed to, what in my mind, was a "damp" week.  I often woke to the patter of raindrops on the tent fly.  A few drops hitting tight nylon sound like a deluge and can cause paranoia.  Fearing the "reprise of the ark", I'd peer out and see that it was inconsequential.  One morning I woke to a bath tub sized, inch deep puddle outside the tent door.  Try stepping into that at three in the morning.  I did.  Still, fishing under sometimes overcast and drizzly skies was a pleasant respite from heat and bright light, even if the fish didn't cooperate. 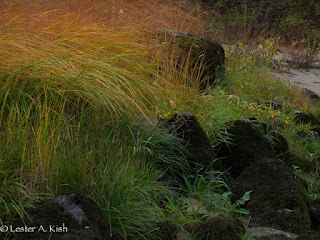 And so, the rest of week was slow, productivity wise.  I never touched another fish.  It appears that I'd burned up my luck on the front end of the week.  The remainder of my stay would be devoted to casting practice.  Not a bad thing, except for those moments when my casting went to hell, usually when I got tired.  Still, on average, I think that I did better than in the past, and made more good or at least better casts than poor ones. 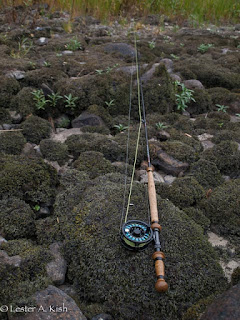 On what would be my last day, I drove back over to the Ronde on a surprisingly foggy morning. The drive over Rattlesnake was even slower going, given the near zero visibility.  Halfway down the "other side" it cleared.


I expected a fish, or at least a pull or two, but got none.  C'est la vie.  It was a beautiful day, damp in the morning but bright for the remainder.  Later, I watched a bald eagle pursue and try to wrestle a fish from an osprey.  That the eagle was nimble enough to chase and stay close was a surprise. 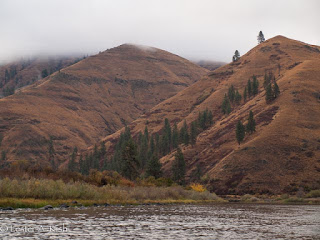 That afternoon, as I drove along the river, I watched a group of anglers, their raft beached, net a fish.  I pulled over and watched as they posed for photographs.  That's the only fish that I saw that day.  Later, I visited with a technician doing creel surveys.  She indicated lots of anglers, little success.  The fish it appears had forgot that it was steelhead season.  At the least, they took the day off.


I had time for one more pass through a favored run and watched as the sun faded from the hills.

So went another year. 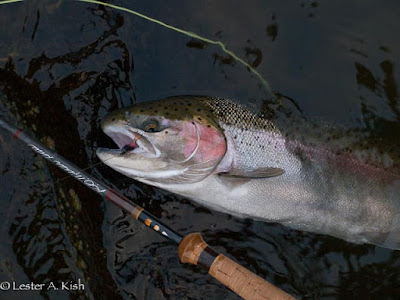