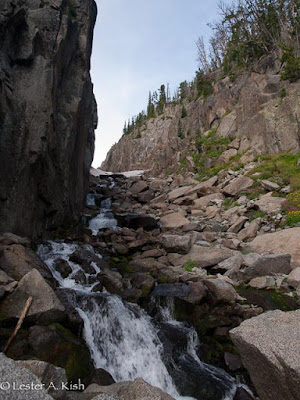 Young, dumb and crazy.  Not me anymore.  I pulled the plug on a fishing venture the other day.  I set out to hike to a mountain lake.  I figured that it should have had a few nice ones just ripe for the catching.

Most of the hike was uneventful, as most trail hikes are.  But the trail ran out.  It was time to bushwhack.  I made my approach and took the direct route, right up the outlet stream that ran through a defile in the mountain.  It was plugged with a large snowfield. No problem I thought. I'll just cross the creek between patches of snow, go as high as possible.  Surely there will be an opening and I'll  be able to rock hop and squirt on through to the lake.

No go.  It just got steeper.  The rocks got wetter.  Crossing the creek got a little more dicy.  I eyed up the rocks.  If its wet I won't jump.  A couple of feet maybe.  Six feet, no way, even with my long gangly legs.

I pondered.  Maybe I'll back off a bit and hop up onto the snowfield.  I muscled my way onto the snow.  Twice.  Hmm.  It's packed pretty hard.  Steep too. For a mountaineer, with crampons, no problem.  For a chicken with a pair of trekking poles and a salami sandwich. Uh,uh.  I had visions of climbing a ways, losing my footing and schussing back down.  I'm  sure that I be screaming all the way.  The rocks that were waiting below were big and hard.

For some reason the headline "Old dumb bastard killed while trying to go fishing" just didn't sound right.  The old, dumb bastard part didn't bother me.  The killed part didn't have a melodic ring to it though.   At least the creek would wash away the blood.

Like the saying goes, "You have to know when to say when".

Fish be damned.  I turned and hiked out.

rivertoprambles said…
It's far better to be discreet there than to have the valor portion of a climb put you in the obits. At what altitude are you running into snowpacks? Anyway, I hope you find a safe alternative that gets you through!
August 17, 2016 at 9:09 PM

Lester Kish said…
I outgrew valor a long time ago Walt. Actually, it wasn't part of my repertoire.

As far as the remnant snowpack goes I'll say it was around 9000'. It wasn't so much a matter of elevation. More a matter of aspect and "perpetual refrigeration" that hindered the snowmelt.
August 18, 2016 at 7:29 AM

Anonymous said…
Les: Good story. Real good decision. 9000ft, yikes. Get stuck up there and in a few weeks you'd become the next Ice Man! Who would write your blog? The salami sandwich part made me hungry...
bob
August 18, 2016 at 6:42 PM

Lester Kish said…
Hi Bob...fame at last! The next Ice Man. DNA analysis would likely reveal the that salami had a higher IQ than the skinny human that packed it.