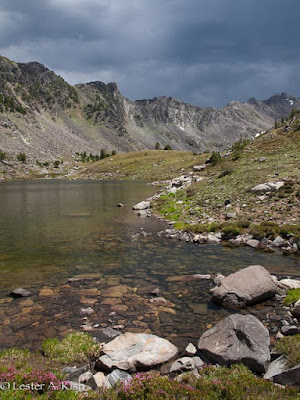 Summer, hiking season.  Time to head to the high country and a visual drink of mountain scenery.  Recently, a couple of hours of steady uphill hiking brought me to the shore of a lovely alpine lake.  I'd been here before.  It was a check up of sorts, to see how the fish were doing.  Like going to a doctor, but hopefully more fun.

There would be a reprieve from the summer biting bugs.  The wind blew all day.  Just enough to keep the little blood sucking bastards at bay.  I never saw a mosquito.  The flies didn't have it in them to harass me either.  So, the DEET stayed in the pack.

There were a few fish rising when I arrived at the lake.   I promptly took a couple on a bead head prince that I twitched back slowly.  What the fish think it represents is beyond me.  A free swimming caddis with a shiny head perhaps.  Regardless, they eat it readily.

Most of the fish appeared to be two year olds.  Quite healthy.  Fat.  Colorful. Scrappy.  West slope cutthroats with a bright red band on the belly.  Simply exquisite. 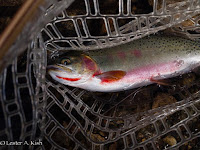 But, I hoped to encounter survivors of earlier plants.  Four, maybe six year old fish.  There likely would not be many left.  But, those that remained would be notable.


I fished, watched, hoped for a sign.  Then, one swam by.  It's like the old saying, you know when the right one comes along......

Oh my, I'd like to catch that one I thought.

I caught a few more little ones, and wondered how long it would take "the fish" to do a lap around the lake.  Then I lost my prized fly.

What now?  I sat on a rock and rummaged though my fly box. A small black leech with a cone head looked good.  And then I did something I've never done while fishing a mountain lake.  I tied on a dropper, a small prince, no bead, about a foot behind the leech.

Back to fishing.  Cast, let it sink, twitch it back.  There was a steady pull.

Oh my, on the first cast.  There's no mistaking the better fish from the little ones.  When I pulled, it pulled back, with an equal and opposable force.

The fish streaked by.  I noticed a profusion of red.  This one I wanted, if for no reason than to get a closer look. 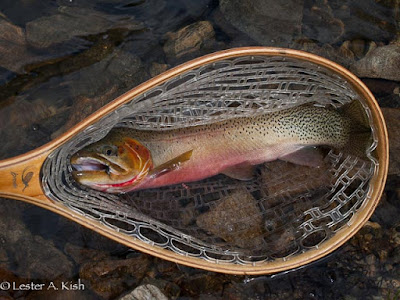 I'd always thought that char were the prettiest of "trout".  But a west slope cutthroat in full color is a serious rival.  I netted the fish and marveled at its color, shape and overall condition.  The little ones were splendid.  This one, perfect.   If I quit now, I'd be happy, the day consummated with the catch of a perfect fish.  The sundae had been topped with the proverbial cherry.


But I fished my way around the lake.
Mounds of heather (aka mountain heath) bloomed profusely and tinged the landscape with patches of pink.  I stopped often to snap pictures of the ever changing scenery.

In making the circuit I caught several more fish, some were "nice ones".

Interestingly, roughly half ate the bugger.  You can do the math as regards the prince. 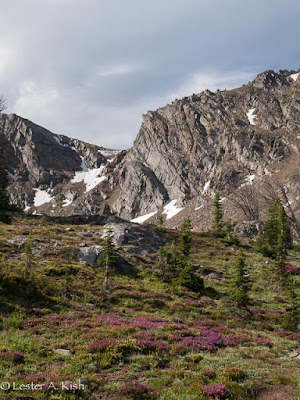 rivertoprambles said…
My mathematical wizardry tells me that half of those very nice cutthroats took the Prince nymph in a wonderful mountain setting. Place of dreams.
July 26, 2016 at 7:26 PM

bob said…
Les: I see you have been mid summer hiking searching for cool air. That cutt photo with brodin net is a classic. I could see it in an angling calander. The beautiful Cutt and net show (pop) up so well against the dark rocks/water.
bob
August 2, 2016 at 8:15 AM

Lester Kish said…
Bob, hiking is the way to go for the next month or so. Such a small window to get into the high country.

It really was a pretty fish. And, I've always liked the mayfly etched into the net handle. Glad you liked the photo too. As an aside, I got a way better one on Saturday, of the Yellowstone variety. A different color scheme those Yellowstone cutts.