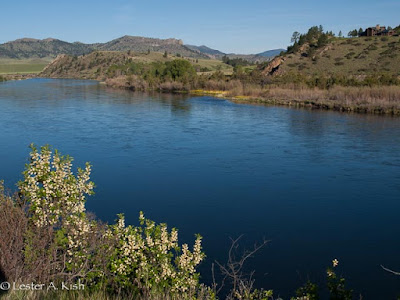 I took a quick day trip to the Missouri earlier this week.  It was a glorious day.  Calm, bright, a toasty forty-seven when I got to Wolf Creek around eight in the morning.  A light sun hoody was all I would need.  Ok, pants too.

Blue winged olive nymphs and midge pupa were drifting in the current.  So, I started out sight nymphing.  A few nice fish were working the shallows.  The water was clear, the fish spooky.  No surprise.  I watched and waited, casting occasionally.  The fish took the pheasant tail, Rojo midge, a little red midge.  Its neat when you can see them eat.

I broke for a sandwich around two.  By then it was getting warm and was pretty bright.  My eyes needed a break from staring at the water.

After lunch it was time to do a little head hunting, so I went for a drive.

I found a few bank feeders.  It turned out that there were enough to keep me entertained for the rest of the afternoon and into the early evening.  Hatchwise, there were a few blue winged olive duns, but mostly spinners, not many but enough to bring up a few fish.  So, I stuck with a parachute Adams with an  RS2 trailer. My knots held.  My net got wet. I got a lot of mileage out of those two flies. 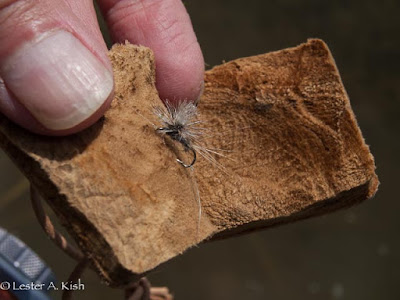 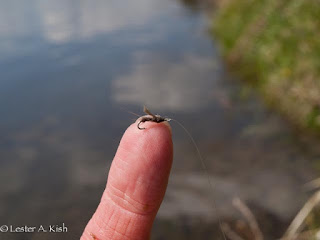 Missouri River fish are quite strong and energetic.  When stung by a hook they realize that shallow water is to be vacated.  Now!  A couple of fish quickly got my fly line and half of my backing.

One fish came in easily.

Well no.  The fish sulked, decided it didn't like my looks and promptly swapped ends.  It then liberated all of my fly line and a bunch of backing.  The bigger fish usually have at least one good run in them.

Another fish, steelhead hot, had to be chased a hundred yards downstream.  Its usually curtains when they get the upper hand like that.  But, the hook held and I slid the net under the fish. 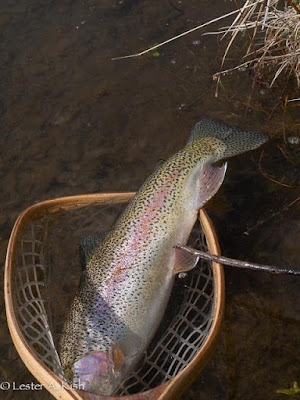 After a few really good fish I was quite happy. More wouldn't have made the day any better so I called it good.  I drove along the river and enjoyed the rest of the evening.

It was quiet and dead calm when I pulled over at the Wolf Creek bridge.  I lingered, took a few photos, tried to get just the right reflection. 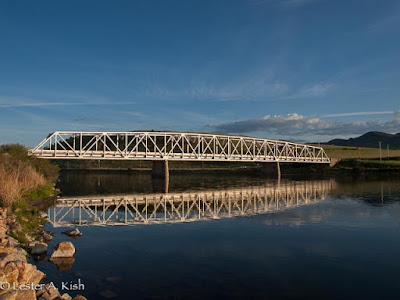 And then I got the "I just want to be there" shot.   A lone angler in a driftboat, plying the water. 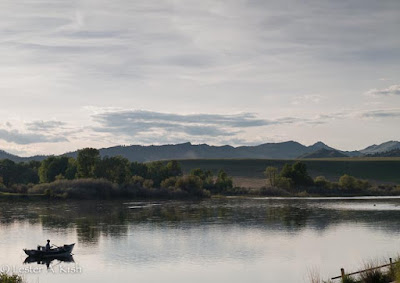 A most idyllic end to the day.