The Midges of April 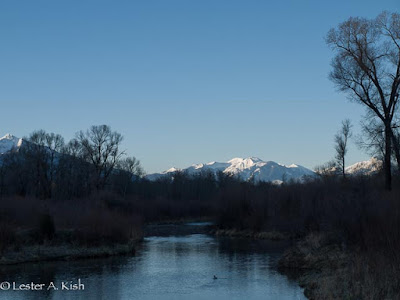 The past few weeks yielded several days of spring creek fishing.  It was primarily a midge game as the blue winged olives failed to show.  No matter, midging suits me just fine.

I usually arrived creekside just as the sun was striking the valley floor.  The midges were in no hurry to appear.  Funny how a season differs from one year to the next.  Last year I was into midging fish early.  This year?  Well, it seemed that the bugs and anticipated bulging fish didn't show 'til mid-morning.  It gave me time to dawdle, snack and have a cup of tea.

I often fished a single fly, something that I rarely do.  The main reason?  Well, it's tough to track a single small fly in the surface film.  A bright day, often the bane of trout fisherman, was a Godsend, especially when the sun was behind my back.  Overcast, regarded as good for fishing, created a rather funky maddening glare.  A little ripple on the waters surface further complicated tracking the fly.  When things got tougher, I ran the midge off of a parachute.  Sometimes that got tough to spot too.

For all the attention that long line casting gets, it doesn't apply to midging.  Not for me anyway. I cast mostly leader.  Sometimes that's a pain in the wazoo.  But, the shorter the line the better.  It increases my chances of seeing the fly and seeing the take.  Tell me, is there anything more thrilling than seeing the nose of a trout poke through the surface film at fifteen feet while it takes the speck that is your fly? 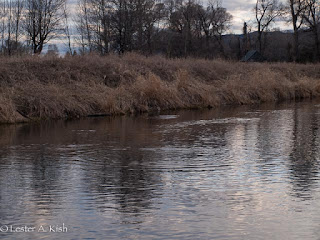 I passed on fishing one day because wind was in the forecast.  It turned out that the wind didn't blow.  So, I opted to fish the next day because calm was forecast.  Guess what?  A steady wind blew from the north.  I spent the majority of the day waiting for the wind to switch.  It didn't.  I found a few risers late in the day, and got them by casting mainly leader and a single down winged midge pattern. The wind rippled surface helped me get close and remain undetected by the fish. I'm still surprised that I was able to see the fly.  The light was just right though. 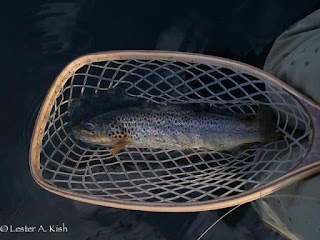 Then, Satoshi and I spent an absolutely wonderful day casting to midging fish.  The fish were primarily cruisers, but there were plenty of them, so we had a steady supply of targets.  We got fish, but they made us work for them.

As for the fly or flies du Jour's?  Well, a variety of patterns worked over the past few weeks. Something that looked like a Trico.  The incomparable biot midge pupa.  A hackled down-winged adult midge.  Harrop's transitional midge.  And, a host of others.  The fish ate them all.  It's just that every fish didn't want every pattern.  Therein was the challenge. 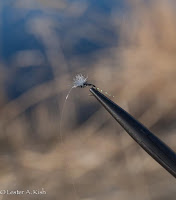 Livingston area guide Brant Oswald wrote an article about fishing midges on spring creeks.  He indicated that he'd created the "perfect" midge emerger pattern a dozen times.  Humorous, but true.  Right when you think that you've got the fish figured out, well, you don't.  Yesterday they wanted vanilla, today it's chocolate.  Tomorrow, tutti-fruity?  His article, titled "Midge Fishing in Paradise" is a great read, it can be accessed here.

But, back to our day.  It took a while to get onto the fish.  Early on, Satoshi had a number of takes, but they came unbuttoned.  I missed several too, then brought three to hand in short order.  Then my successful streak of landed fish ended and I proceeded to lose a bunch.  The fish got my last two transitional midges.  I poked around in my midge box and settled on a cdc pupa. Some of the fish liked that too.

So, what were they really eating?  Satoshi got another rainbow and gently pumped its stomach. The results were most enlightening.  A bunch of midge pupa, many still wriggling were in the sample.  As we watched the pupa in the petri dish, some even hatched and flew away! 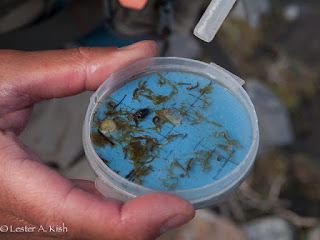 By early afternoon, we'd already done pretty well. We settled into a routine of fishing and watching rising fish.  Satoshi kept at it, I alternated between photography and fishing.  He'd catch one, I'd take a few photos.  Then, the sight of rising fish was too much to bear, so back to fishing I went. 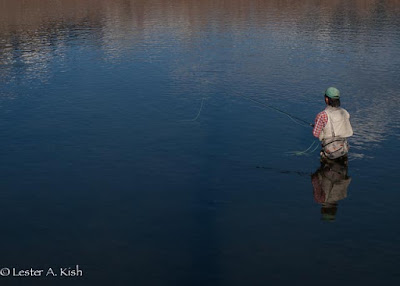 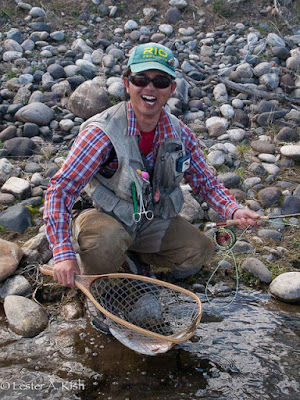 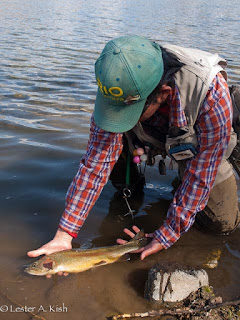 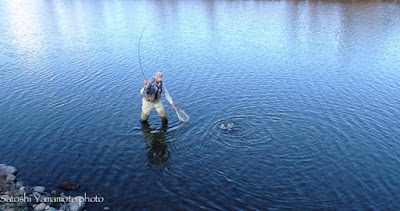 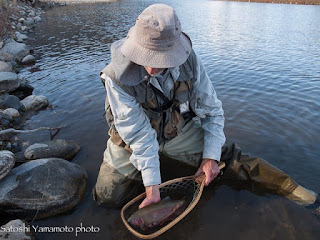 Good days end but that makes them all the more memorable.  Fish were still rising as the shadows lengthened and the valley floor grew quiet.  What better way to spend the day than by casting to spirited rainbows with a kindred angler? 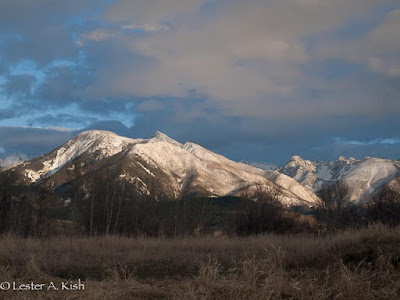 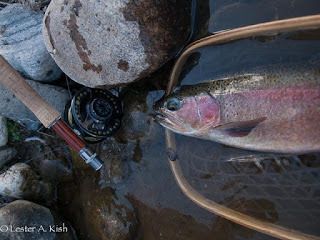 Anonymous said…
hey Les: Sounds like a lot of fun...some consistent rising fish, trying different flies to fool them..the best type of fishing....always engaging. Thanks for the link on midges (Oswald). Will check it out.
bob
April 15, 2016 at 3:26 PM

Lester Kish said…
Hi Bob, that one day made up for the previous six months of slow ones. That link really is worth checking out too.
April 15, 2016 at 9:52 PM

Bill Trussell said…
Lester
Congrats on an unforgettable outing, even thought trout were lost; still those you brought to hand were quality. The midge pattern is a curse and a blessing at times for me; sometimes I forego fishing it knowing full well it might improve my catch/ratio—why do I choose to fish another pattern, because of the midge size-----20, 22 loses me a bunch of trout especially when the takes are light, but again on the plus side I am into fish----do I want to lose a bunch and pick up some trout---well yes!!!
Trying to decipher which pattern will work best on any given day especially for me can be frustrating at times; but can be rewarding once you find the magic pattern---it looks you guys found it in a number of patterns today---really enjoyed the read, I will check out the link---anytime I am always into more about midge fishing . Thanks for sharing

Lester Kish said…
Bill...midging is a near fatal attraction. Like a lot of things that we know aren't good for us but we do anyway. It's just too much fun and oh so satisfying when a fish finally comes to hand.
April 17, 2016 at 6:34 AM

Lefty Angler & Flies said…
Another great midge days on creek, to wrap up our early season. Nice to fish with you for some of those days! Thank you for great pictures!
April 18, 2016 at 1:56 PM