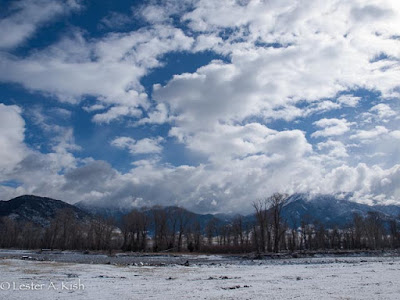 March, as I mentioned in an earlier post is a month of waiting.  Dry fly fishers wait for bugs.  We (ok, I) wait(ed) for nice weather.  Well, the first half of the month was pretty nice. The past couple of weeks, rather unsettled.   I had the opportunity to fish, or rather, endure, a variety of conditions.

I'd always wanted to fish during a snowstorm.  I did, and, let's just say that's an itch that I don't need to scratch again.  I don't care if the blue-winged olive hatch rivals the plague of the locusts. For the record, it didn't.  Even the olives had enough sense to stay in out of the snow. 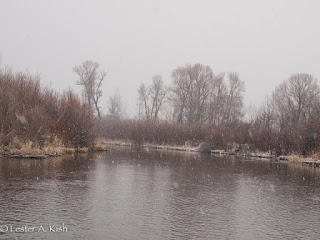 Fishing in the rain?  Did that too.  Don't need to do that again either (unless I'm steelhead fishing in Alaska).   Lets just say that the novelty of being miserable wore off long ago. 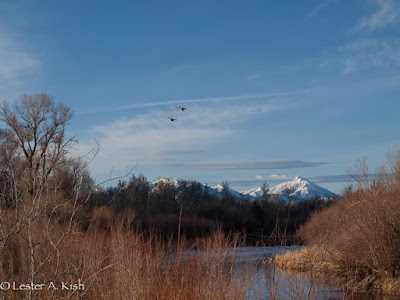 Today was a beauty.  It was dead calm when I arrived.  The sun had yet to hit the valley floor.  When it did, the wind kicked in.  Immediately.  Absolutely amazing.  It couldn't wait five minutes?

So I swapped leaders.  There was no need for a long one.  Something short and manageable would do.  I fished a short leash too, maybe three feet from the dreaded Thingamaboober to the bottom fly.

For the record, nymphing works.  It's a deadly technique, rivaled only by drowning a nightcrawler.  You've heard the saying "show me the money"?  Well, for fish, it's "show me the nymph". 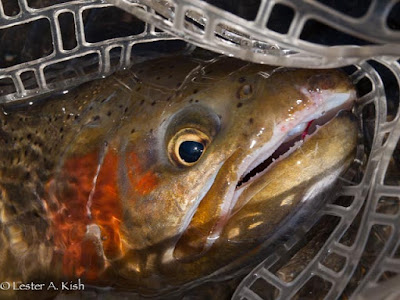 I quit for lunch at eleven, as much to rest my eyes from the light, as to grab a bite to eat.  Who'd have thought that catching fish causes migraines?

Better after an hour break.  I again swapped leaders.  Comparadun and emerger time, I hoped.

But, there wasn't much doing, the wind was still blowing.

Early in the afternoon, I finally had a dry fly eat.  Wouldn't you know it?  I looked away from the fly for a moment, and, when I looked back, it was gone!  I waited all this time and then I missed the take.

Got the fish though.

And, that was enough for one day.  Easter Sunday.   A ham was waiting at home.  Maybe a piece of pie too.

So, a fine day, in spite of the wind.  Blue sky, warm.  Plenty of cooperative fish.

I saw a few wayward olives.

And, the first caddis sighting!  A little guy, but he still counts. 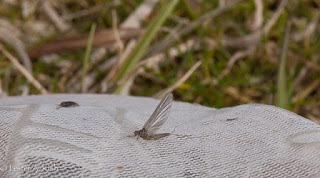 My dry flies are still waiting. 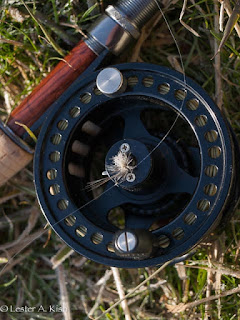