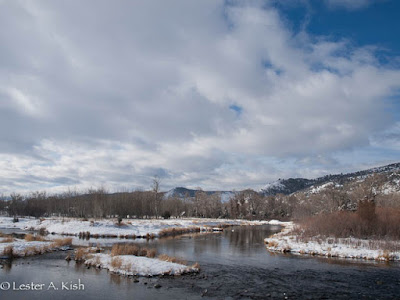 Today was a snow day.  And, I'd made plans to fish.  I got up early and did the requisite shoveling, then left, hoping that there would be less snow over the hill.  Nope.  I was pushing snow with my bumper when I got to the creek.  Ok, so it's a little Toyota with a low bumper.  Getting stuck was a concern.  I decided "what the hell" and went for it.  I'd deal with getting back out to pavement later.

With all of the fresh snow it was a beautiful morning.   It was quite a show when the sun started to peek through the clouds.  I'm always content to snap photos.  And I never tire of scenery.  The same scene on any give day is different.  And, some days it changes constantly, in moments. 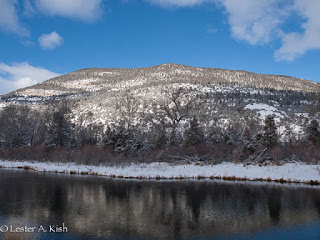 So, I started the morning off by nymphing, grudgingly.  I got a couple of fish, and, that was enough.  I proved to myself that I don't care to nymph. That's not what I came out for.

Well, the light just kept getting better.  I went for a stroll and took more photos.   I was content to bide my time.  I'd wait.  Maybe, just maybe.

I found a few fish dimpling in some slack water.

"Well, hello there" I thought.  I've missed you so.

It was bye, bye beadhead.  Sayonara Thingamabobber  (that's all the Japanese I know Satoshi!).  I promptly swapped leaders.  Thirteen feet or so, tapered to 6X would do.  Overkill?  Well, it's standard for summer use.  Might as well get reacquainted with the fine rigging.  And of course, tipped with a nice juicy midge.

Now, there wasn't much for bugs on the surface.  Nothing drifting in the water either.   Something got the attention of at least a few fish.  The midge would have to do.  And, it did. 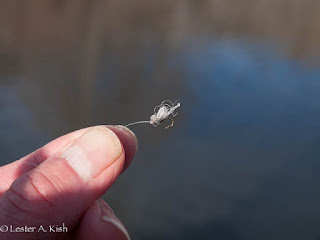 It was fun time. A bunch of little cutthroats kept me entertained.  A few rainbows.  A small brown. A few bigger fish cleared the water occasionally, but they never surfaced with any regularity.  No matter, I'd be back and we'd do a little business when the bugs started hatching in earnest in a month or so.

All in all, not bad for a couple of hours work. 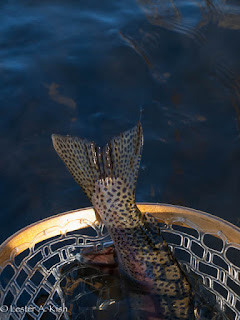 By the way, I had a new toy to try out.  A Redington Classic Trout in a three weight.  It's an eight and a half footer.  Let's just say that it's "lively".  I like it.  It loads with ten to fifteen feet of  three weight line in a double taper, and, that thirteen foot leader.  I'm pretty sure that the size twenty midge adds significantly to the loading.  A fourteen inch rainbow bends the rod clear to the reel seat.  That's my fancy review.

Birds for the day.  Mallards.  Chickadees.  Some kingfishers. A couple of snipe.  Robins too. 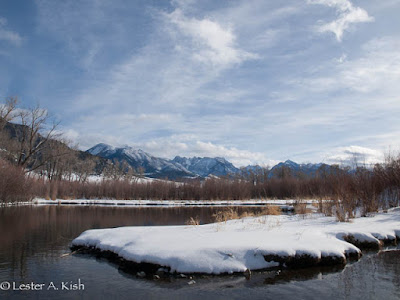 Oh yes, I saw the first blue-winged olive of the year.  He disappeared in one of those dimples.

Bill Trussell said…
Lester
What a day to be out trout fishing. I assume you had the place to yourself. Was this a Zebra Midge you were using? How were you fishing it, with an indicator or tight lining?
Today’s high here is 38 with snow in the forecast for the end of the week, really unusual for here.
I am a Redington fan; I have that same fly that I use on the tailrace often, along with my 9 ft. For the money you can’t beat this fly rod. These rods are some of the lightest fly rods on the market. Nobody out there can touch this fly rod for price and performance. I also have the 7 ½ ft. along with the Drift fly reel that I use with the 8 ½ ft. and the 7 ½ ft. You might want to take a look at the 2/3 Drift reel. Great Post –thanks for sharing

Lester Kish said…
Bill, I was the only one dumb enough to get away from the main building. Once I got going, I didn't dare stop. Same thing coming out.

The midge is fished as a dry. It's a take off on Rene Harrop's hatching midge. This version is tied with poly yarn, just a few strands. Even though the midge is visible at fifteen, maybe twenty feet, I dropped it off of a size 18 tail-less parachute Adams. The fish ate both.

Thanks for the tip on the reel. I used a Cabelas RLS reel. It's nice and has a smooth drag. Most folks think you don't need a drag for smaller fish and light lines. Not true. When a fish takes off and the line comes tight to the reel, a smooth drag is critical, especially when it's 6X. Start up inertia is important. I set the drag so light that it's essentially in free-spool mode.

Redington also makes a reel that's a couple of ounces lighter than most. It's called the Zero. It may be worth checking out.
January 18, 2016 at 6:06 PM

Lester Kish said…
So, winter finally caught up to you! Walt, I was jealous last month when you still had bare ground. We haven't had much cold lately, plenty of snow though. Bill on the other hand is going to have to order some long johns, he may have to check out a you tube video on the fine art of using a snow shovel.
January 18, 2016 at 6:16 PM

Bill Trussell said…
Lester
Just curious what the rene harrop look like so I did a google image search take a look at this link and let me know if this is the fly thanks
http://fishingmontana406.com/?p=911
January 18, 2016 at 7:41 PM

Lester Kish said…
Bill that link is to Andersons Yellowstone Angler in Livingston. They are, I believe, one of only three shops that carry Harrop flies. I've picked up a few there and at Harrops Trouthunter shop just to save and use for my own tying. The Harrop flies are very nicely tied. Mine aren't nearly as nice but the fish still eat them.

But, back to your question. The flies shown in the link are CDC adult midges. Also useful. I goofed when I called my imitation a takeoff on the hatching midge, which by the way is also a useful pattern. I meant to say that its a poly version of the transitional midge by virtue of the trailing shuck. Tightline productions did a nice video of the pattern... you can see it here: CDC Transitional Midge Or just Google CDC transitional midge.
January 18, 2016 at 9:36 PM

rivertoprambles said…
Les, Responded at my blog to your comment on fishers w/ regard to the range map, in case you missed it. Thanks
January 21, 2016 at 7:43 AM

Lester Kish said…
Hi Bob, it was pretty productive, especially considering that there wasn't much happening. That scraggly little midge worked pretty well. And, I could see it too. It's still in "product development". I've added a few legs...just for the "weight". The rod is a lots of fun. I'm a little skeptical about trying it on the Missouri though.
January 24, 2016 at 6:43 PM

Ben said…
Midges are a good bet when nothing is working. That little BWO is a good sign though! I get excited the same way that you did when I see trout rising. Even though I have more success nymphing, I find dries more entertaining.
February 10, 2016 at 5:30 PM

Lester Kish said…
Hi Ben, thanks for checking in from far eastern Canada! I can't deny the effectiveness of nymphing, but the surface eats are definitely more stimulating.
February 11, 2016 at 5:44 AM