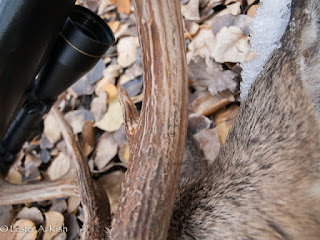 Hunting.  The natives call it making meat. For me it's a process.  The kill has always been secondary.  For some that's all it is.  Pity.

Years ago, I'd take weeks of vacation to pursue elk.  I often hoped that I wouldn't be successful, just so I could continue the hunt. Hiking, climbing, sitting, waiting.  Alternating between sweating and freezing.  All, part of the process.  Most days I returned to the car with clean fingernails and a light pack.  But I was happy.  I could go out again.

Then I burned out.  I quit hunting.  My rifle was replaced with a fly rod and camera.

I uncased my rifle a couple of weeks ago.  Just out of curiosity.  Was a flame rekindled?  I wondered how I'd react when I saw game?  Better, how would my back respond if I completed the task?  I saw a few elk, some deer.  A buck.  Interesting.  When I got home, I left my gear in the car. A sign.

Two days later I went again.  I saw no game. Got soaked.  Again, the gear stayed in the car.  Well now.

Another two days passed.  I went again.  At first light I saw deer, antlers.  My pulse quickened. The thrill was still there. There was no denying of instinct.

A moment later there was work to do.  Initially, I was greatly saddened.  I immediately swore this would be the last time my finger touched a trigger.  But then I started the process. Making meat. Skinning.  Quartering.  Carefully stowing it into cloth bags.  And then, packing.  Two trips.  I learned long ago that dragging game is, quite literally, a drag.  So, I packed it out on my back, that's the only way I know.  An old familiar sensation, my legs burned, back tightened.

At home, the process continued.  I carefully trimmed the meat, then cut it into distinct portions. A couple of roasts, some steaks. Odds and ends went into the burger tote.  I ground the meat, mixed it with beef fat.  Then, there was wrapping and labeling.  The result?  A freezer of meat for the winter.  I knew where it came from.

So, the process had resumed. I felt the old dormant satisfaction. Maybe next year I'll continue.