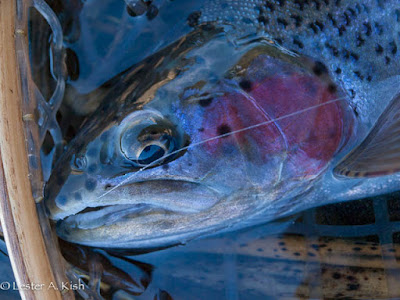 This is the infamous year end summary, sort of along the lines of the Christmas card with the letter stuffed inside.  I'll omit the photo of the dogs with fake antlers.  Some of you may remember Gene Hill . He was a well known outdoor writer,  and, I'd wager that he's still popular with the wingshooting crowd.  He occasionally wrote a piece for the sporting magazines titled "The Annual Report". I'll credit him with the title of this piece and absolve him of any responsibility as regards the content that follows.

Well, let's see, I still fish with a camera slung over my shoulder, and rarely hike without it either. Admittedly, packing an SLR is a pain, but I still think it's worth the hassle.  When I look back over the year or years, I can pinpoint dates that an event occurred.  Aha, fish that day, bugs that one, a seventy degree March day and so on. So, I can plan out my annual fishing trapline based on my meager experience with hatches, water conditions, etc.  The time stamp on the photo is useful too. 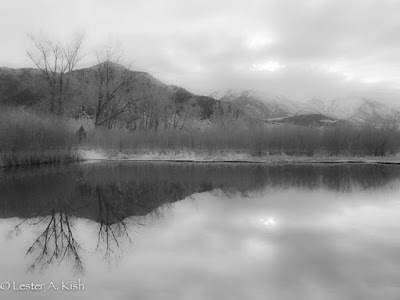 The year always starts quietly.  Winter in the Rockies is a matter of biding time, waiting for a forty degree day with tolerable wind.  There were a few in January, more in February.  Most days were, solitary, reflective.  I spent many winter days poking at  a fire in a wood stove, reading, thinking, drifting off into a flame induced hypnotic state. 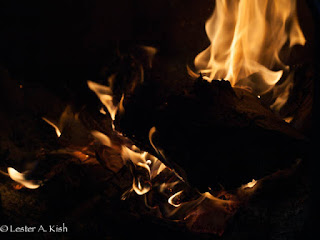 Midges, I can't seem to keep from tying the darned things.  They're hard to see, but if the fish want 'em I'll tie 'em and deal with the attendant difficulties of attaching them to the leader when the need arises. There were some productive midge days early on.  And, the fish were willing to eat them clear into March and April.  I'd even dare say that the fishing was outstanding at times. There were days when I thought that I was a good fisherman. 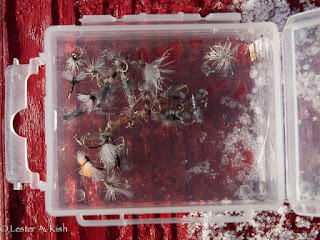 I tied more flies throughout  the winter.  That's no big deal for most of you, but I took it upon myself to fish dry seriously, relatively speaking.  No purist I, in fact I'd hardly fished a dry fly before this year.  Now, I can hardly bring myself to stare at an indicator.  Scratch that, the lead fly is an indicator.

Observing and trying to make sense of hatches was most enlightening.  There was a day on the Firehole when I watched blue winged olive nymphs drift in the current, float towards the surface, and then wriggle and break from their nymphal shuck.  Simultaneously, others were crawling up the legs of my waders.  I erroneously thought that they too were nymphs.  Six months later, after re-reading a July 2008 article  in the Fly Fishing & Tying Journal (Baetis:  The West's Best Hatch by Jim Schollmeyer) I realized that the insects crawling up the legs of my waders were likely female spinners laying eggs.  And, just to make the days fishing more challenging, it seemed that no two fish were feeding on the same insect stage. It's the problem solving and hatch deciphering that makes days on the water so interesting, especially when each day is different.

Likewise, PMD's took up tying time, fishing time too.  I'll say that the PMD hatches that I witnessed were more productive fishing wise than the blue winged olives.  Fortunately, the patterns were pretty much the same, just a matter of playing with size and color.

By the way, why is it that I don't have the "right stuff" for tying any particular fly.  It seems that I'm continually off the the fly shop to pick up some little bag of fluff.  Hundreds of little bags later, I still need more.

After the dry fly foolery subsided, there were late summer trips to the high country.  Lugging a pack gets a bit harder each year.  But, the scenery is reason enough for going.  I still crave solitude and appreciate the reward that goes along with making the effort .  Serene timberline camps.  Epic sunrises and sunsets.  A few fish.  One day I'll no longer be able to make the haul. At least there will be pictures to look at. 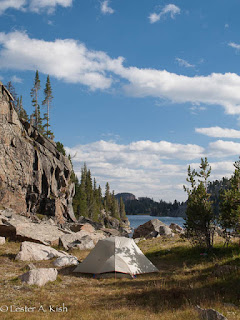 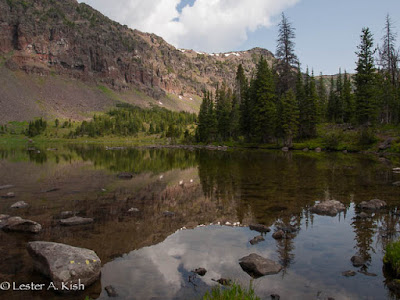 Jo's garden turned out to be a mixed bag.  Tomatoes and potatoes were hit early by some malady that caused the leaves to wilt.  They never really recovered.  Zuchini, as per usual, were quite productive.  Squash that volunteered from the innards that had been tossed into the garden the previous year did extremely well, much to the dismay of the dogs who saw their kennel overrun by errant squash vines.  One blighted apple tree was removed and replaced by a plum.  The production by our other trees was nil.  Six plums total, that was six more than we expected.  Meteor cherries produced zip.  The other apple tree, nothing either.  The dogs inspected the garden daily, and snacked when Jo wasn't looking. 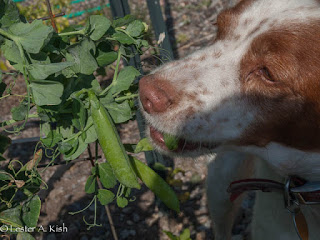 The dogs had a good year, and a better autumn.  Birds were plentiful, thanks to superb (meaning dry) nesting conditions in June.  Jo and the girls got lots of exercise.  Lots of points, some shooting, and, a few huns made it into the game bag.  A wayward rooster pheasant made a tactical error and was invited to dinner as well. 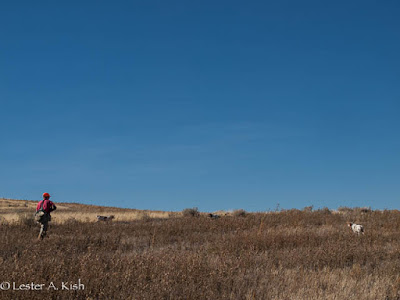 October, glorious October.  It's always good.  This year was too good, and still, there wast't enough of it.  The fishing trapline was extended to include the Firehole, Gallatin, Madison for trout, and the Clearwater, Grande Ronde, and Salmon for steelhead.  I tailed a few fish and discovered that it's impossible to hang onto the "wrist" of a steelhead's tail while simultaneously uncasing the camera, focusing and trying to frame a shot of the fish with the other.  I had a witness for at least one of the fish, but he's unavailable for comment.  Never did trust those mergansers anyway. 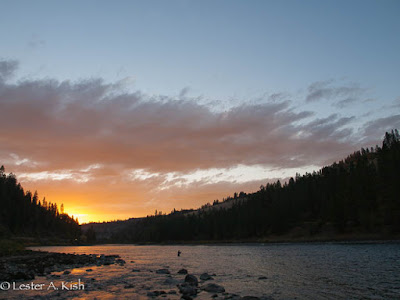 After many years of vacancy, the freezer once again is home to an assortment of packages that bear the label, venison 2015.

November came and went unceremoniously.  And now, December is slipping away too.  I'm still biding time,  hoping for that forty degree windless day.

To top it off, my wife decided that four bird dogs were not enough.   We now have eleven.  Well, seven are pups.  One will stay.