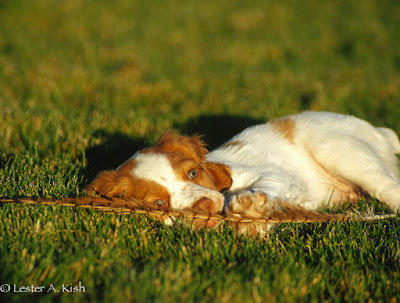 There's just something about slides that can't, or at least in my opinion, hasn't been duplicated by digital cameras.  First, you can pick up a slide.  That's right, there's something tangible to hang onto.  Then you can drop it onto a light table, and voila!  It pops. More color.  More life. With slides, you know immediately.   Properly exposed?  In focus?  Either they're good, or garbage.   That said, the entire digital process is a hell of a lot simpler, more convenient too.

I've had a Nikon slide scanner for years.  Unfortunately, many iterations of Mac software upgrades had rendered the Nikon software inoperable due to non compatibility.  After several years of non use,  my scanner is now functional. I purchased Vuescan driver software (www.hamrick.com) for my Nikon scanner. It's usable by most scanners and they continually upgrade the software to keep up with Mac and Windows.

I hit a minor glitch after the software download.  But, after a little fiddling around, I was able to decipher the main reason for the software non function.  That being, I plugged in the wrong USB cord.  Duh.  When I  attached the scanner cord to the computer, Vuescan immediately located the scanner.  After that, scanning was a breeze.  Biggest decision?  Final output of the image.  I decided on jpegs, they're one-tenth the size of TIFF files.  If the Smithsonian decides that they absolutely have to have one of my images for archiving, I'll scan to the larger file format.  'Til then, jpeg it is.

So, with the recent additions to our household, here's a not so random assortment of scanned puppy images.  They're from the litter of five that Maggie was born into.  She's the liver and white pup in images three and six. Three of the five miscreants, known as the twisted sisters, live here to this day.  Louie, the lone male, is the mustachioed one in image five.  He has gone on to win a boatload of awards for his prowess as a bird dog.  Addie, seen pulling my wife's hair in the last image, continues to get in trouble. 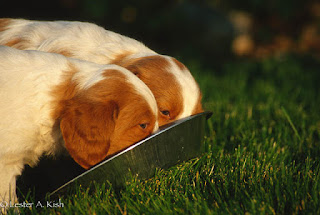 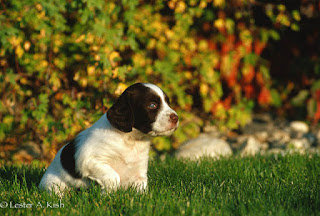 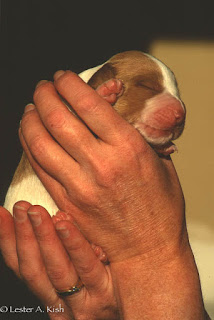 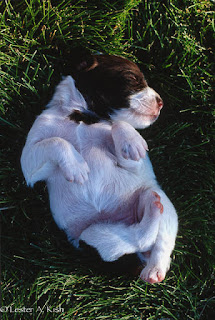 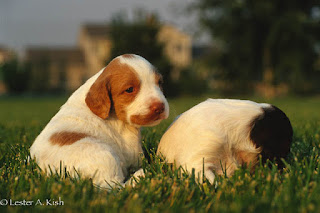 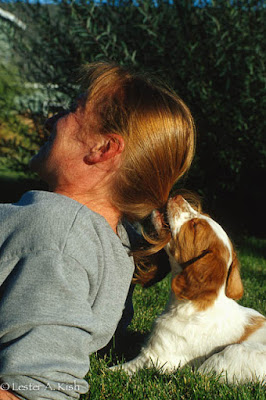 Going through boxes of slides, some dating back to the seventies, should keep me off the streets, out of the bars, and away from my job as a piano player in some aforementioned establishment.

Bill Trussell said…
Lester
The slide quality is awesome, but I have to say that the new puppies is what makes the slides shines. Thanks for sharing
November 20, 2015 at 7:33 PM

Jim said…
Was just looking at some older digitals of some of my pups. They're not in that stage for long, but they sure are fun. Sadly, momma took my Kodachrome away!
November 21, 2015 at 4:30 PM

rivertoprambles said…
Cute pups, and even more special because they don't do those all-too-cute FB tricks!
November 21, 2015 at 4:47 PM

Lester Kish said…
This batch of pups is only three days old, but they've grown already. Even the smallest of the litter is starting to fill out. They go from here to eight weeks old in a hurry. In between they go from being blind and helpless to getting into all kinds of mischief. Fun, but trying at times.

Lester Kish said…
Thanks Walt. Yup, they sure were a cute bunch. Their best trick is that they've taught us humans to fetch. Food. Water. Snacks. etc.
November 21, 2015 at 10:13 PM

Lester Kish said…
Jim, I just looked at your website. How did you manage to stuff a basketball down the throat of a lake trout? Talk about hogs!
November 21, 2015 at 10:16 PM