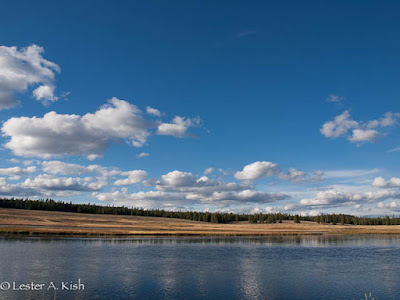 Yesterday was a perfectly wonderful day.  I hit the road early to make the hundred plus mile drive to the Henry's Fork.  We'd had a few cool wet days this week with snow in the high country. This would be the first "improving" day with some sunshine and warming temperatures.  I got to Last Chance a little after eight.  Low clouds and fog hung over the river.  There was no hurry to get going, the bugs would take their time today.  I piddled around, poured a cup of coffee, got my gear together, eventually pulled on waders and prepared for a long exploratory walk.  Across the river, coyotes howled, then a bull elk bugled.  Meanwhile, various waterfowl did their thing, honking, quacking, flying up and down the river. 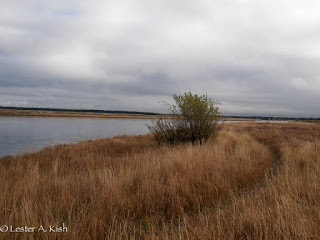 The clouds would be slow to depart but added immensely to the now autumn sky. The distant Tetons gradually appeared as the clouds lifted. Mostly, I reveled in the sounds and scenery. There was no wind either!  This was the first day that I'd wear my silk long johns.  Light fleece wading pants too. 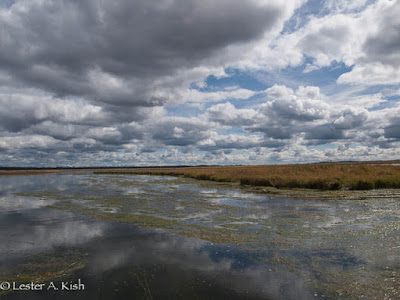 Of course,  I hoped for some sort of hatch.  I dearly hoped for something big that I could see, like a mahogany dun.   There would be no such luck.  I eventually got blue winged olives, zillions of them. Now how was a fish, a smart fish, supposed to select my crappily tied imitation from among all of the  real ones floating by?  There must have been fifty real blue winged olives per square foot.  No kidding.  Add my fly and it would make fifty-one.


Regardless, the day passed much too quickly.  I stalked fish, fought weeds.  When I finally found a suitable, approachable fish, I cast futilely and without reward.  Late in the afternoon a fish ate my fly.  I promptly broke it off. 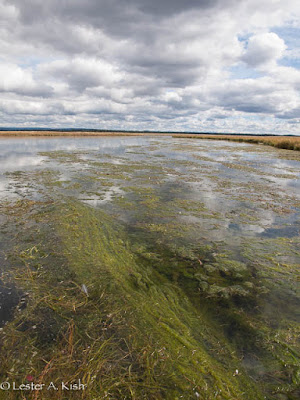 I thought about calling it good, but the day just kept getting better.  More blue sky, better light.  I took  more photos and laughed to myself about my predicament of having a fly hatch that consisted of too many bugs.  Then I found another fish that entertained me by busily gulping baetis.  He didn't want anything I offered.  Then he took off upstream, gulping bugs as he went.  I got out of the water, got ahead of him.  I was ready.  Here he comes!  I couldn't get the blasted fly unhooked from the guides.  When I did, no fish.


Much later, now evening, while walking back to the car, I noticed a half dozen fish rising.  These were the real deal, big ones.  I squinted while staring at the waters surface.  Should I?  A big dorsal fin sliced through the surface.  Why yes, I think I should.  So I re-rigged.  A small parachute, which I couldn't see, followed by a smaller floating CDC nymph.  They didn't want it. Mr. Big Dorsal appeared again.  I swapped the floating nymph with a size 22 dun.  I for sure couldn't see it, I hoped the fish could.  No matter, they didn't want it either.  Then the sun went down.   Game over.


And so, I got skunked on the Henry's Fork, for the second time in two weeks.  Another day wasted?  Heck no, it was spent  perfectly!  In another twenty or thirty years, I may get this fly fishing thing figured out.  Maybe I'll even catch one! 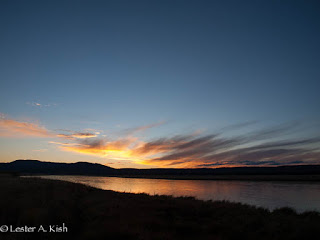