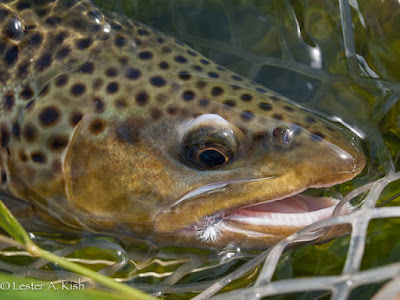 Not too many bugs on the water yesterday.  A few clouds of Tricos midmorning.  Then, a brief sparse spinner fall brought fish to the surface in one run.  A half dozen fish cruised the run, lazily sucking in the tiny spinners.  On a quiet morning, you could hear the fish smacking their lips.  I just love the sound of a happily feeding fish.  They weren't easy though.  I continually reinforce the fact that fish in low clear water are exceptionally spooky.  The flash of a fly line is death. Make a cast and the fish stop feeding.  Guess what?  Game over.  Then the wait starts.  Maybe they'll come back and resume dining.  In a few minutes, or fifteen.   I got one real nice one, on of all things, a small parachute Adams.

It was a great eat, followed by the usual anxious moments.  A small fly, attached to 6X, attached to a fish headed downstream, attached to an angler mired waist deep in midstream muck.  I wondered if the fish would stop.  Then, would I be able to get it back?  I did, but then, it went back downstream again.  I hoped the leader had just enough stretch.  I hoped the tiny hook would hold.  Where would an angler be without hope?

And then, there's the hand tied leader.  If you tie your own, you know the gig.  Twelve feet, fourteen feet. At some point the leader needs to be drawn in if the fish is to be netted.  Now, anxious takes on new meaning.  There's the loops at the line end connection, followed by the nail knots that make up the taper.

One knot through the rod tip, then another.  The fish isn't ready.  It gives a pull.  Back downstream it goes.  Cautiously it's pulled closer.

The loop knots again tick through the rod tip.

Then they're through the next guide.

He wants back downstream.

A nice fish, he poses graciously.

The hook pops out,  I dip the lip of the net, the fish eases out and swims away.