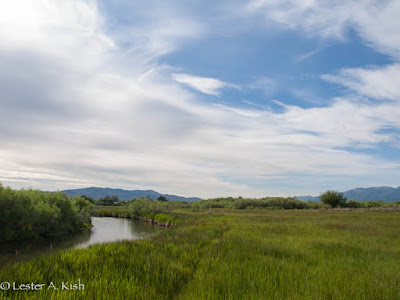 They're called pale morning duns, not pale crack of dawn duns.  Standing in the water at 5:30 guarantees that not much will  happen until let's say, ten.  I learned that lesson a couple of weeks ago on the Missouri.  Yesterday, different river, they arrived later.  Much later.  Like in the afternoon.  I was starting to sweat it, literally.  No bugs, no fish activity, it was hot as hell too. Thankfully the bugs eventually showed.  It's impressive when the bugs start hatching and the fish get on them.  A lifeless stream surface can suddenly bustle with fish breaking the surface. 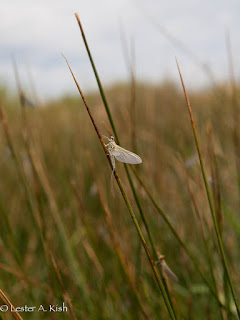 While waiting for the vaunted hatch, I watched and tried in vain to catch one sizable brown trout. For hours.  It was content to sway in the current and grab bugs as they drifted by.  I attached some fine netting to my trout net, caught a few PMD nymphs.  Actually the screen job was unnecessary, the nymphs were clearly visible.  I thought, piece of cake. I'll get him lickity split.  I tied on a nymph, and cast.  And cast.  And cast some more.  He didn't want it. He never stopped feeding, and never moved to avoid my fly.  He just didn't want it.  No problem, I thought.  I'll come back and get him when the bugs start hatching.  Guess what?  That fish never rose, even after the hatch got going. One tough picky fish. 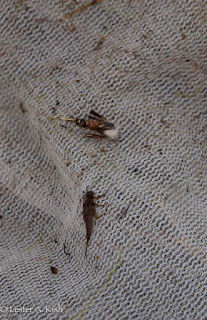 I was determined to catch a fish on a dry fly.  Early afternoon, the hatch finally started.  One pool that I had eye-balled earlier just said fish.  The bugs brought them up.  I eased into position, tied on a couple of different cripple patterns, picked a fish and dropped the fly near the riser.  It took, first cast.  A big pull, line peeled from the reel, a jump.  Holy cow, what a brown trout!  We parted ways promptly.  He looked to be two feet long.  I can still see him suspended in the air, upside down, chocolate colored, big black spots, hook jaw and all.  He's going to grow some by the weekend, my guess, to two and a half feet.  He was the biggest fish that I would see, and probably for a hell of a long time.

Well, that fish mucked up the pool.  It took some fifteen minutes for others to resume dining.  A couple of casts, bang, another nice brown.  We also parted ways.

Fifteen minutes later, another fish rose.  Same scenario.  Bye, bye fish.  Then the pool went dead, and stayed that way. At least they ate the fly.

By the way, somewhere in the past, I'd remarked that I didn't care for CDC.  I'd like to retract that statement.  Mr. Harrop's CDC biot cripple is a good thing.  CDC is a pain in the wazzoo to restore to fishing condition.  But, if the fish want to eat it, swell.  I'll rinse it, squeeze it, dry shake it, coat it with frogs hiney, whatever.

So, early afternoon it was.  And, the only thing that I'd netted was a few PMD nymphs.

I got to thinking, "Can I have a fish please?   Just one for my patience and effort?" 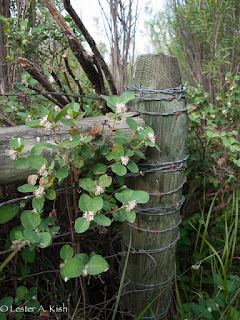 Of course not.  So, I kept hunting for feeding fish.  Thankfully, I found a pod of feeders.  They liked Mr Harrop's  fly too.  I caught a few, moved on, found another pod, took a couple of fish and moved on again.  No need to beat them up I thought.  Take a couple and call it good. 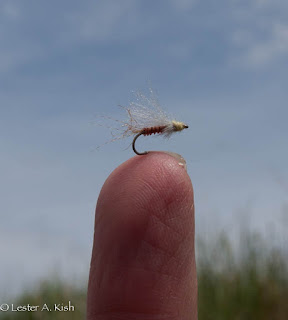 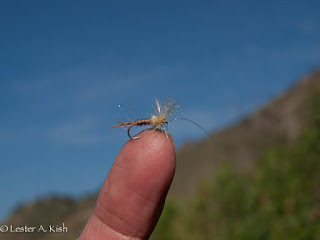 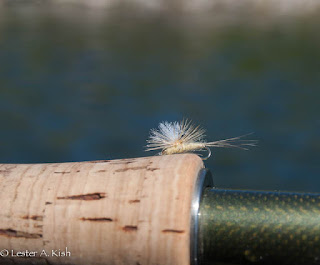 But, but, but, I just needed one more fish.  You know, the fish to end the day.  So, another pod, a couple more browns and then I spot Mr Gator lazily sucking in bugs under some hanging brush. I lay out the cast and, I'm feeling pretty proud.    I've avoided all of the brush behind on the backcast, and the fly lands on the water, neatly underneath the hanging brush. Nice drift too.  Mr brown, duly impressed, eats the fly.  He's the one out of ten that picks the Quigley cripple.  Sorry Rene. 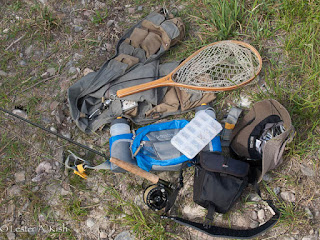 I should add that I'd invested ten bucks in a waist pack that held two water bottles a couple of days ago.  It was a wise move.  With temps pushing ninety, this angler needs to be well watered to pose a threat to the fish.  I started at eight in the morning. It was five-thirty before I decided to break for lunch.  A little water goes a long way.  So does a well hydrated angler. 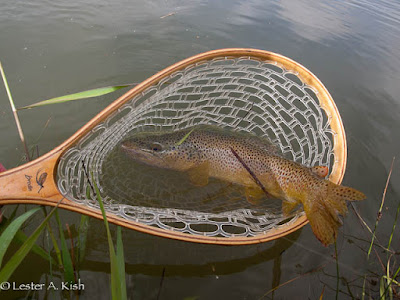