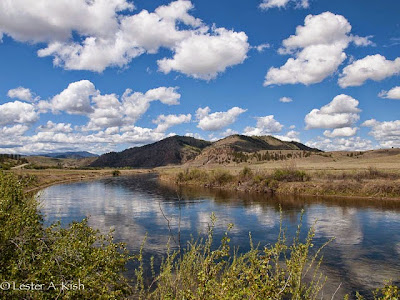 It was a heavenly day on the Missouri.  Warm, comfy.  No wind.


It was a good day to watch geese too.  Adults and variously aged and sized goslings were out and about in abundance.  I stumbled onto a nest too.  Goose eggs are pretty big.

Fishing wise, it was slow going, at least as far as surface activity goes.  I sight nymphed a couple of fish early on.   After that, I bided time, waiting, hoping for some sort of hatch.  I was determined to catch fish on top.

I watched one rainbow on and off throughout the morning.  It was positioned right up against shore, strategically hidden from view by brush.  Not well enough though, I was looking for him.  I could see other fish too, some close to shore, others farther out.  This particular rainbow fed actively.  I could see it move from side to side, its mouth opening and closing, obviously grabbing stuff in the current.  It would rise occasionally too.

I got him a couple hours later.  It took a bunch of casts.  I put him down once. I left for a while, worked some other uncooperative fish, came back and worked on him some more.  Stubborn? Why yes.  You can't catch rising fish that aren't rising.  And, this was the only one in the neighborhood that decided to poke its nose through the surface film.  So, I stuck with this one and got lucky. 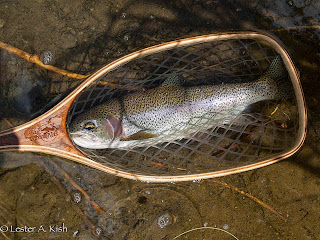 Later, I drove along the river, scouting for potential new spots to fish.  Along one section, I noticed some subtle rises.  First thought, whitefish.  But no, I know better.  I jumped in, well below the risers, and found several dimpling the surface steadily.

The next couple of hours would be great fun, following moving pods of fish. Rainbows, when hooked, went berserk.  There would be an immediate and decisive line ripping run towards mid-river, then a jump just to show off their size.  I'd reel like mad, get my line back, but had a hell of a time holding them. The hook would pull out at the critical moment or they'e jump the net. Barbless hooks are good, quick release nets the same.  I never laid a finger of the biggest fish. But, even with the searing runs and jumps, no fish broke the 6X all day.  That was a surprise. And while the Missouri contains mostly rainbows, the days catch would primarily be brown trout, of better than average proportions.  Another surprise. 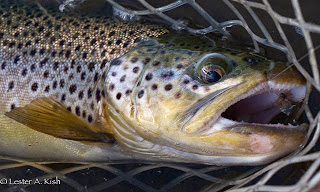 An admission.  I've never been much into fishing the dry fly. What's kept me away?  I'm patient to a fault, but keeping the fly afloat is a pain in the wazzoo.  It's a tough problem, I know.  Catch a fish and complain (not much though).   I've got fly floatants stuffed into several vest pockets.  I'm still not sold on any one, how about you? 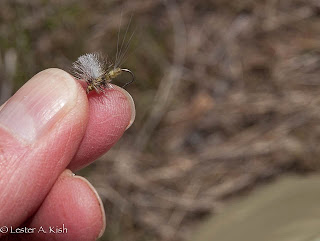 Regardless, it was a most productive dry fly outing.  I found out how brief and spotty a hatch and surface feeding activity can be.  Had I quit early and not gone exploring, I would have missed out.  I also found out that I really like dry fly fishing, floatant issues notwithstanding.  Catching fish is ok too. 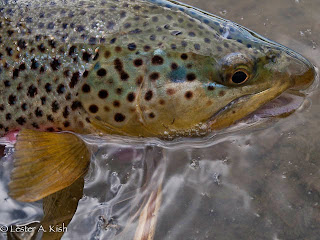 
While driving along, I noticed a backlit angler.

Anonymous, and a nice subject to add to this scenic image


A memory and a cliche 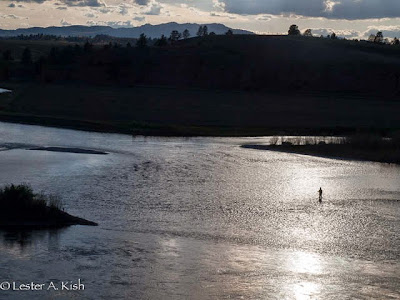 Bill Trussell said…
Lester
I'm glad to see the dry working for you, even with a little floatant. I have found that the spray floatant works best for me; it seems to keep the fly a float longer than the traditional liquid. The liquid will sometimes cause the fly to gum up causing it to sink much quicker.
Patience is the key when trying to get a trout to take your offering in a certain area; only the true seasoned anglers practice that virtue and that includes you. I am still working on that factice of the sport. Enjoyed the post

Lester Kish said…
Hi Bill, I've tried gels, liquids and powders, all with relatively equal success. Are sprays really any better? Like waders that will eventually leak, dry flies will likewise eventually sink. Just a fact of life I guess. Thanks for the input.....
May 24, 2015 at 4:50 PM

Lester Kish said…
Thanks for the product link Bill. I've used some of the Loon products, mainly dry shake. Might have to try that fly spritz.
May 24, 2015 at 10:17 PM

Anonymous said…
Les: Enjoyed one "Mo Day". LOL. Nice browns. You had a good day. I have also learned on that river that is sometimes pays to move around when searching for rising fish. One spot none, another spot some.
I use mucilin(sp) paste, just a touch and then the shake stuff if fly becomes saturated. I also change flies often..a fresh one. I've heard Bill's spray is good stuff. Nice pic on river angler.
bob

Lester Kish said…
Hi Bob, thanks for checking in. I've got an old retired vest with a pocket that has a big greasy looking stain. I thought it was from a tin of mucilin that had melted. I just looked in the pocket and found it to be an empty tin of Permagrease from Orvis. The felt pad is still inside. It dates back to the 70's. I don't know why I'm saving it. Maybe it will be worth something someday. Regardless, I may have to grab a tin of mucilin and give it a try. Heck, I've got just about everything else. I picked up a tube of "Dry Magic" at Headhunters too. Supposedly good for my other nemesis, that being CDC. Didn't get around to trying yet. If it's any good I'll have to tie some CDC patterns just to give the fish something else to look at.

I have to chuckle. While I was sitting on that first rising rainbow, an angler pulled up and intently scanned the river with binocs. He left, returned and repeated the process several times. That one fish was rising perhaps fifteen feet from where we stood.

Rivertoprambles.wordpress.com said…
Fo' sho,' a nice day on the Mo. That peaceful shot of the angler says a lot. When it comes to dry fly action and the question of lubricant, he's probably thankful for a bit of false-cast action.
May 25, 2015 at 9:10 AM

Lester Kish said…
I like the angler shot too Walt. I tried to make the moment appear more perfect than it was. Some things just look better in real life. They're even better when one is actually the subject in the picture.....
May 25, 2015 at 2:16 PM