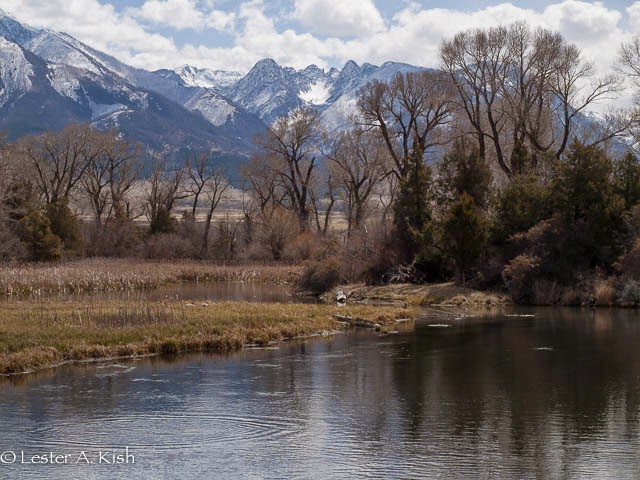 Another winter season on the spring is coming to a close.  This would be an all day trip.  I wanted to squeeze as much out of the day as possible.  The day got off to a frosty start.  No messing around today, I decided to forego usual fire starting ritual and dressed outside. Did I say that it was chilly?  And, the temp continued dropping while I was rigging.  The old fingers were a bit frozen and clubby by the time that I was ready to go.  Now,  I'd packed a bunch of those instant warming packets for years.  Yesterday, I finally gave one a try. Tucked into my wader hand warmer pouch, my fingers were at least comfortably thawed by the time I reached my chosen fishing spot. 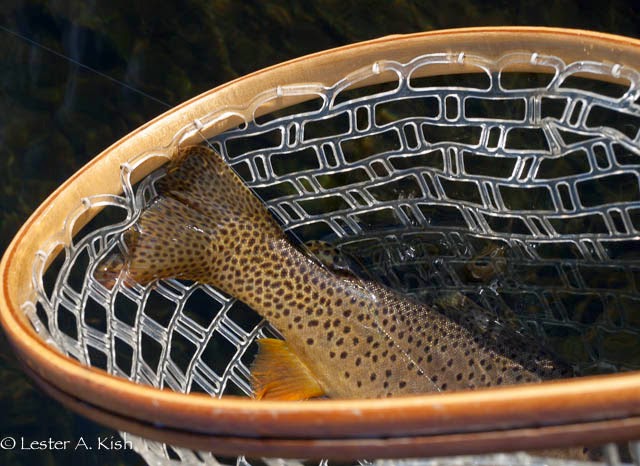 I waited a bit for the sun to creep down the west facing slopes and into the valley.  Once it did, it didn't take long for the morning to warm.  Midges would be the main item on the fish menu. Well, at least that was what I was serving.  A nice cutthroat came to the net right off the bat. Then a nice rainbow, soon followed by a creditable brown.  Ah, the spring creek trifecta.  No whitefish today, but I was eye to eye with several and deliberately avoided casting to those.  After that it just got better.  Fish willingly gobbled my offerings.  I thought, geez, today even I'm a good fisherman.  The morning, as my guide friend Dax Messett would say, was epic.  I quit at noon.

Along the way, I ran into Satoshi.  We compared notes on the mornings action.  We, unfortunately, would not get to fish together later as planned.

My break was rather short though.  I found fish rising in a spot that I'd always avoided.  It was a slow moving shallow flat with an even, sandy, mucky bottom.  The fish, quite exposed, not surprisingly, are spooky as hell. Fish were cruising lazily, picking bugs off of the surface. Eventually, I was able to fool another nice brown.  That was pretty gratifying.  Another couple of hours passed quickly. Now, it really was time to knock off for a bit. 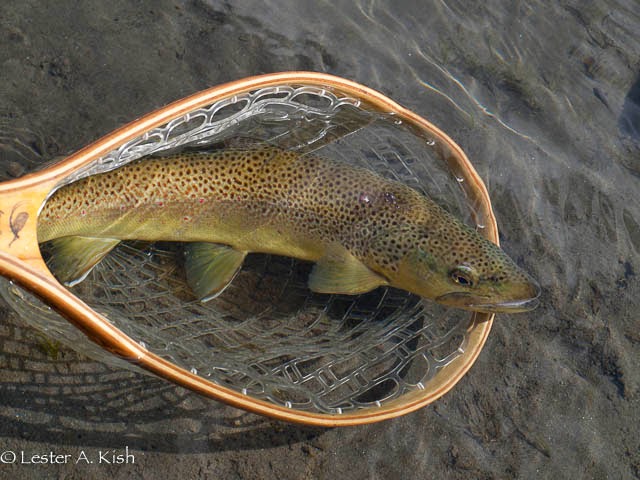 Later.  Another little run.  A slight breeze blew, enough to ripple the waters surface.  When it stilled, the noses showed.  Gulpers.  Post spawn rainbows, now off of their redds, were making up for their period of fasting.  They too were cruisers, never staying put, never rising in the same spot.  It made for a fun, challenging, and rewarding afternoon. 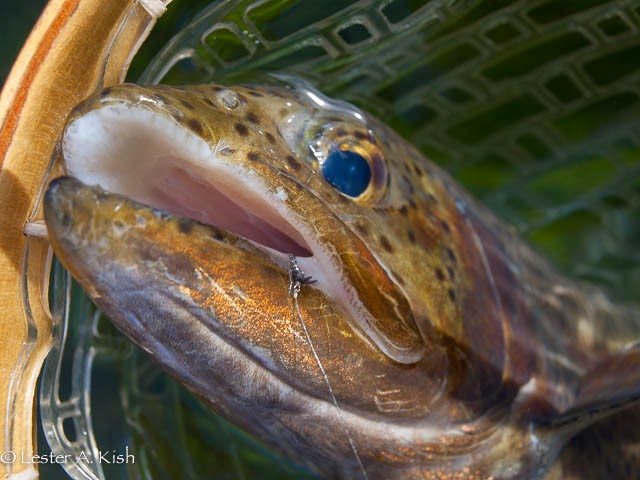 So, as far as bugs go, it was midges mainly.  There were a few blue-winged olives.  An odd caddis or two.  Even a small stonefly.  But again, midges ruled the day.

And perhaps the real star was the scenery.  The mountains were out today in all of their glory.  I never tire of the view and always find time to stare.  It's cost me  a few fish. 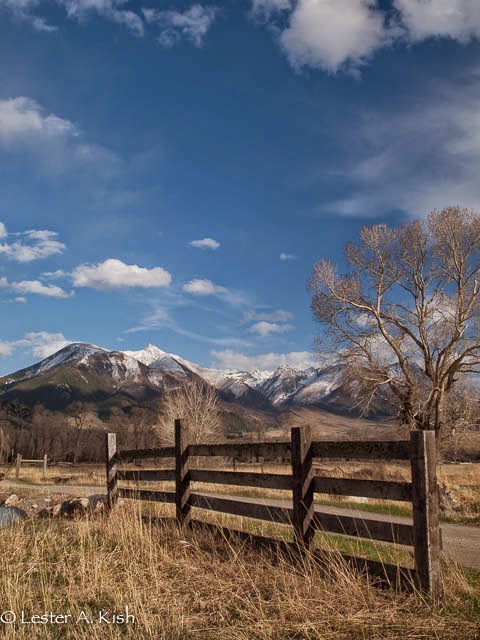 And since the clock never stops running, the day, as all eventually do, wound down.  I didn't want to miss a moment.  So, I stayed 'til dark. I was a bad boy.  I missed supper at home.  Instead, I grabbed an apple and drank in the the view.  And so, with this sunset, another winter season came to an end.  When the apples ripen again, I'll return. 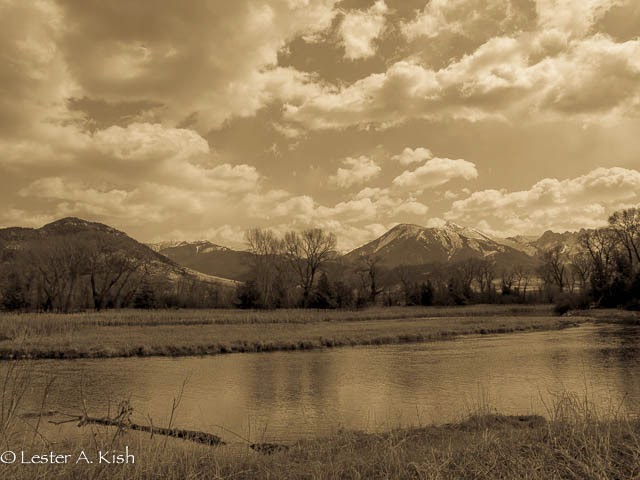 Anonymous said…
Les: You are having some pretty spectacular early season days on the spring creek...perfect days. Nice pics...love that one with the brown slightly curled in or on the net, and off course the scenery shots. Not enough! I understand. No risers in my neighbourhood yet, wind howling, etc. I may have to drive to the Mo again if things don't pick up.
bob
April 12, 2015 at 8:43 AM

Bill Trussell said…
Lester
What a great post showing the beauty of the place and the spender of the trout you landed. Oh how I wish we could get brown trout here in our tailrace. I know the fight with brown was a challenge on the fly. To land a trout like that on our tailrace would be astounding here; but a least we have trout to fish for here even if they are stockers. Wild trout in there natural habitat is awesome. Thanks for sharing

Lester Kish said…
Yes Bob I have to admit that I've had my share of swell days lately. They sure help make up for the tough ones.

You know, that brown just sat and sulked after being released. It even let me wade within a couple of feet. Never moved.

Lester Kish said…
Lord knows, I love Alaska.....but I appreciate Montana more and more. It really is a beautiful setting to cast a fly.

Actually Bill, I'm quite surprised that you've got any trout in your neck of the woods at all. Trout? In Alabama? Sounds like an old Jeff Foxworthy routine.
And, those "stocker" rainbows that you get on the tailrace? No doubt they provide a thrill. I'd surely appreciate them.
April 12, 2015 at 10:56 AM

Anonymous said…
Les: Funny how each fish is different upon release. I've had browns stay quiet and still for a moment then bolt like they've been zapped. Yes, it would be nice to run into you on the great Missouri.
bob
April 12, 2015 at 7:34 PM

penbayman said…
A lovely spot and great pics Les..I especially like the last one..Most people never think about black and white any more, although yours seems a bit tinted. Great effect..There's something about B&W that attracts me..probably because when I was growing up in the 50's the photos my Mom took were mostly all B&W..occasionally she would treat herself to a roll of Kodachrome..
April 16, 2015 at 3:54 AM

Lester Kish said…
Hi Mike....the last photo is just a color conversion in Lightroom. I don't usually mess with filters, but it worked for me on that one. My dad used to develop his own pictures way back when, black and white, like your mom. Digital is convenient, but I miss slide film and the anticipation and excitement that went along with the first viewing of newly developed images on a lightbox. Thanks for stopping by....
April 16, 2015 at 5:48 AM