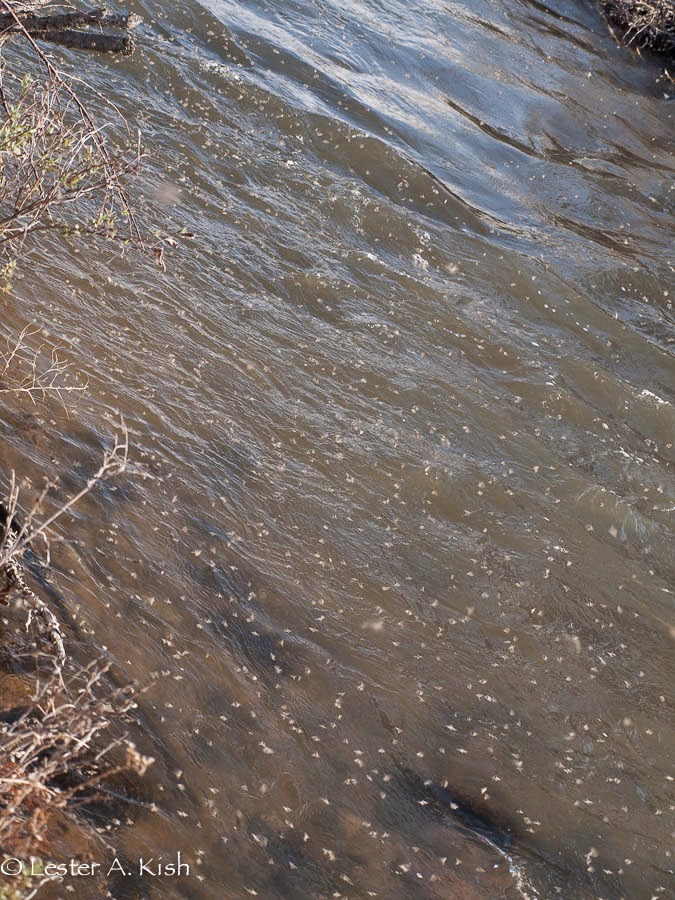 The caddis made their inaugural appearance of the season this week.   Normally, I find no need to hurry out to the river.  You can if you like.  Arrive too early, and its too bright, and surprisingly, a bit warm already.  The last hour or two is the best time of the day.  Once the wind settles, clouds of caddis fly en masse.  It's an incredible sight.  I think that you'll agree.

This week, I went twice.  When I arrived at the river, a few tree swallows busily flew over the water.  They're a good indicator of the presence of winged insects.  In this case caddis!

Once fishing, I stuck with adult caddis patterns.  Basically an elk hair type.  I also use deer, caribou and antelope for the wings.  They all work.  The antelope and caribou hair is more brittle though.

On the first night I had a devil of a time trying to spot my imposter on the surface of the water. So, after I got home,  I tied a few with a fluorescent post.  That helped a little. 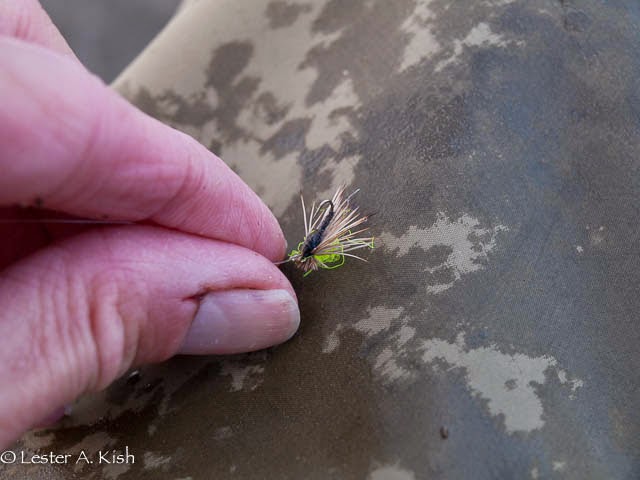 Interestingly, the real bugs, backlit and in flight, looked quite light, tannish.  At hand, they were dark, gray black bodies, dark winged.  Flush on the surface, in waning light, they were tough to spot. 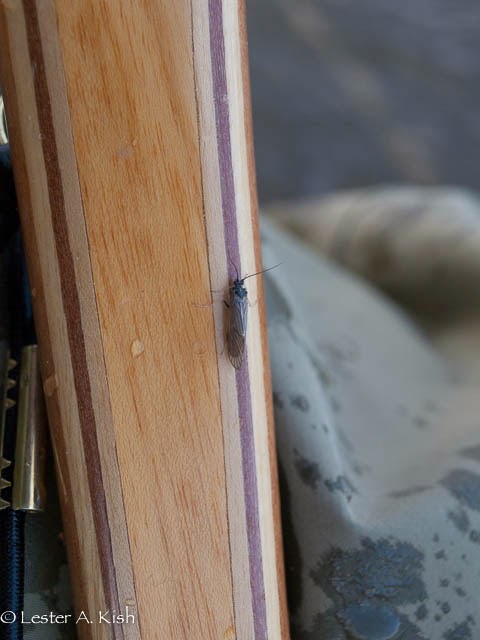 The water was somewhat clouded on my second trip of the week.  No matter, fish greedily gobbled up the drifting caddis.  And, the intensity just increased into the evening as more spent bugs settled on the water.  Fishing wise, it wasn't a slam dunk.  The trout simply had too many naturals to pick from. 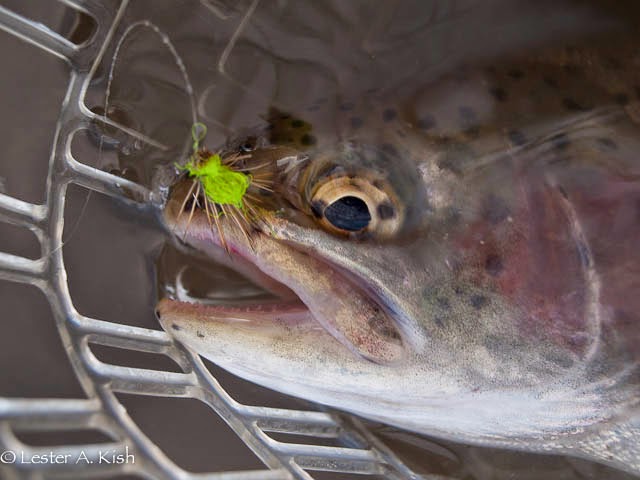 Often, I had fish rise within four feet or so.  This, while I was trying to pound out a ten foot cast to a more distant riser.  That they continued to rise, so close, indicated that they either didn't care, or had such a narrow feeding window, that they couldn't see me.  No doubt, the waters murk helped me get close. Any closer, and I could have netted them.  That would have saved a good deal of squinting.  Sometimes, I could see my fly drifting along, surrounded by naturals.  Fish would rise within an inch or two of the fly.  It was hard to resist setting the hook.

I tried several spots.  Anywhere the water slowed was good enough to attract and hold feeding fish.  Rainbows stole the show both nights.  I did get one lonesome brown.  And, just for grins I tied on a humpy.  The fish liked that too! 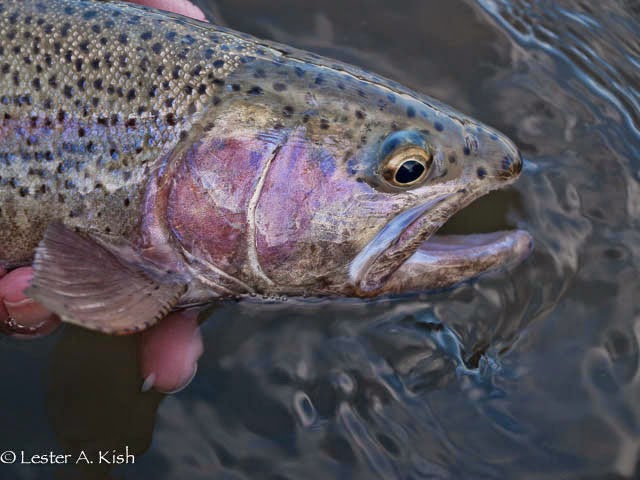 A leisurely stroll back to the car.  I took time to drink in the evening.  No need to hurry.  I just savored the waning light.  I stopped often, to watch and listen.  I saw the first bat of the year. Distant lightning.  Crickets chirped.

It was time to put the river to sleep for the night.  The caddis, after a busy night of flight had called it good too. 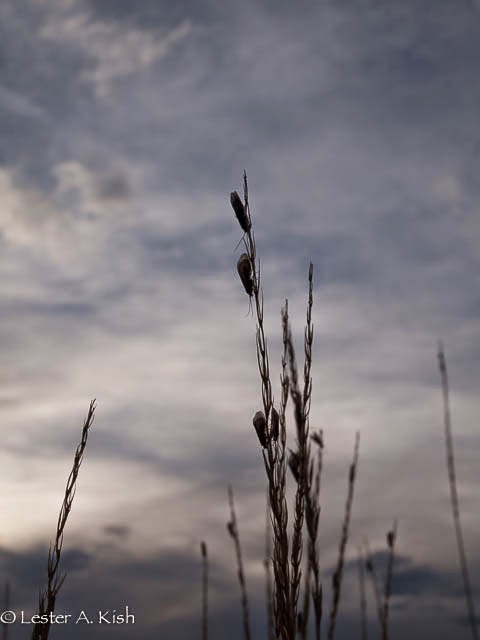 Rivertoprambles.wordpress.com said…
Nothing like fishing with complete leisure and abandon, though I'll bet that competing with all those caddis can be frenetic, as well. Reminds me of caddis madness that will come to our rivers, too, at least with some degree, the crazy evening hatch, but for now our waters are still cold (45 degree stream temps today). Glad that you're having fun out there on the big river.
April 25, 2015 at 7:35 PM

Went back out last night. It was cooler, slight breeze. Air temp under fifty. The bugs were reluctant to fly. They hunkered down and clutched the stream side vegetation instead. Got a few fish to eat on top.
April 26, 2015 at 8:07 AM

Bill Trussell said…
Lester
Fly fishermen are blessed if they witness a spectacular hatch like you did on this outing. Does this type hatch occur quite often there or once or twice a year in that area? I’m glad you were able to fool a couple of trout into taking your offering, especially with all the caddis on the surface. I have only witnessed such a hatch once on our tailrace which was last year. I was able to land a few trout, but like you the hatch was so massive that the trout had trouble finding my fly on the surface. Thanks for sharing

Lester Kish said…
Bill, once the hatches start, its a pretty constant progression of bugs. This first pulse of caddis is the vanguard of hatches to come. It is the infamous "Mothers Day Caddis Hatch", which incidentally, usually begins several weeks before Mothers Day. From here on out, if it's not blowing or snowing, it's bugs, bugs, bugs. Glad you enjoyed...
April 27, 2015 at 10:29 AM