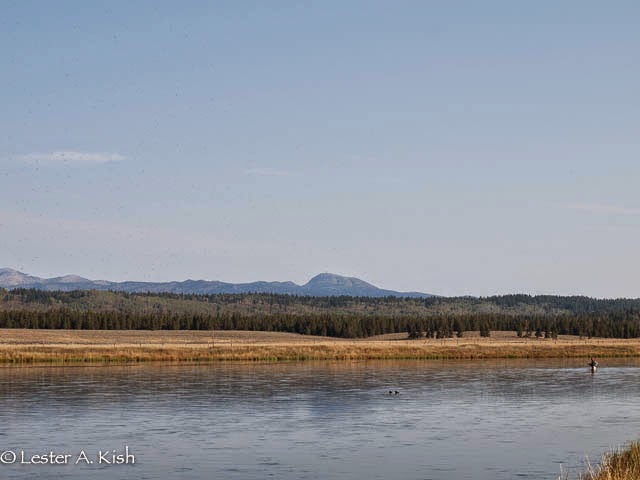 It only took forty years, but I finally did it.  I drove to Island Park, Idaho and, instead of just looking at the water, I wet my line in the storied Henry's Fork.  Known for tremendous insect hatches, it's regarded as some of the finest dry fly water in existence.  It's a spring creek, a very big one at that.   A hundred yards wide in many places.  Size wise, it's quite a change from the Paradise Valley spring creeks that I'm accustomed to fishing. 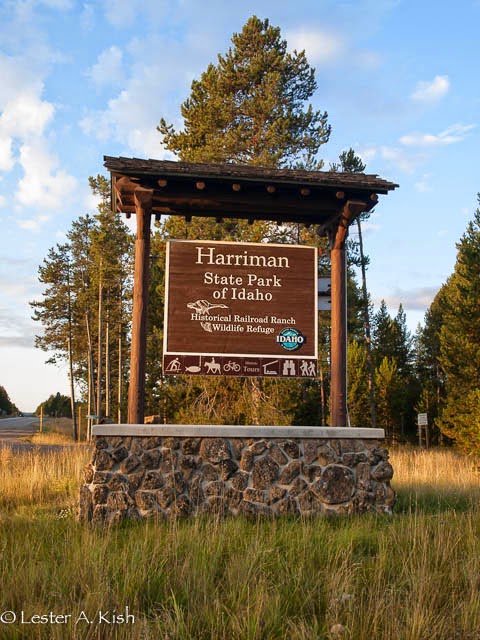 I started off by getting a day pass to access Harriman State Park (available at park headquarters). Then, wanting to fish the middle section of the ranch, I backtracked and parked at the appropriate access point along the highway. From there, a pleasant mile long morning walk along an old ranch road led me to the fabled waters. It was quite a sight. 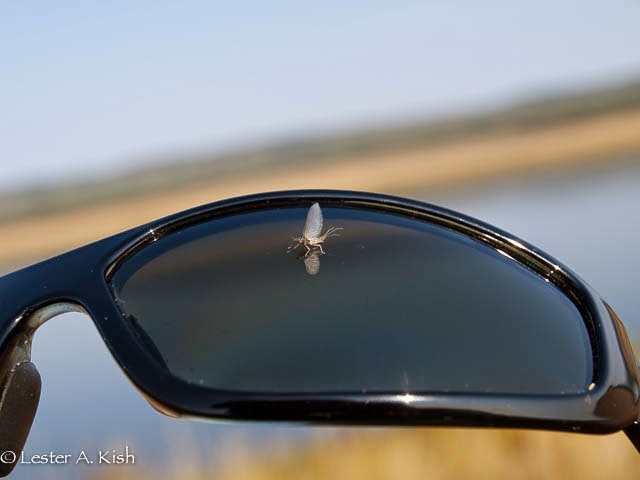 Bugs were starting to hatch when I walked up to the stream.  I can't say that it was a huge hatch though.  A few clouds of tricos, some blue-winged olives, a very few mahogany duns, and likely some other stuff that I missed. Unfortunately, the fish were missing in action. So, I broke out my latest toy, a one gallon sized paint strainer that slid handily over my landing net. I got the idea from the boys at Gink and Gasoline.  Other than a few BWO duns, all I got in the screen were some midge pupa.

I hung out for an hour or so before I finally noticed a rise. Then nothing.  Minutes later, another. Then nothing, again. Not exactly a feeding frenzy. 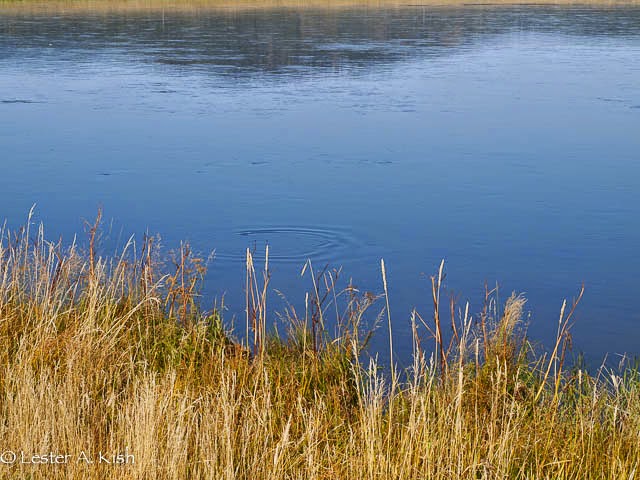 I finally found a bank sipper. On hands and knees I crawled closer.  Then, crouched, I tried to make a sidewise presentation.  The fish just turned and swam off.  He came back about ten minutes later.  Again, same results.  As far as I can tell, it must have caught light glinting off of my fly line.  Holy crow.  Talk about tough fish.

I was beginning to relegate myself to the "not good enough" category.  Well, at least it was a pretty locale and I could take pictures, instead.

But, I continued to wait patiently for another fish to rise.  Eventually, one did, then another, nearer.  I cast.  The nearer fish took pity and ate the beetle.

So, I could say that I came to the Henry's Fork and found out that, at least, I was lucky enough to catch....a fish.  My net never got wet after that.  The fish quit rising altogether. 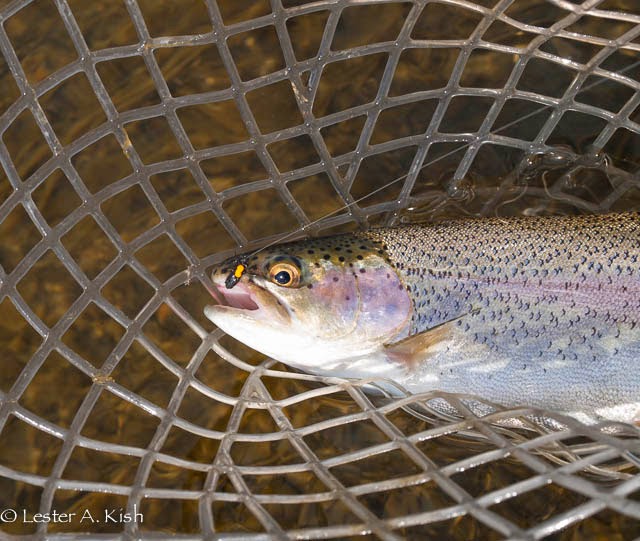 So, I spent the afternoon exploring the ranch.  I drove to the parking area at ranch view.  I walked a few trails and checked out the historic buildings at the ranch headquarters where I stretched out in the shade of a big spruce on the lawn.  I then walked up to the "millionaire's pool."  Now, mid-afternoon, the wind had picked up and was blowing steadily upriver, rippling the surface.  If there was a hatch, any rising fish would have been tough to spot.  So, sufficiently barbecued by the bright sunshine, and with my eye's shot from squinting at the surface of the river through sunglasses, I called it good for the day.

I have to admit that it's a very scenic spot.  No wonder so many pictures have appeared in the various fishing magazines. 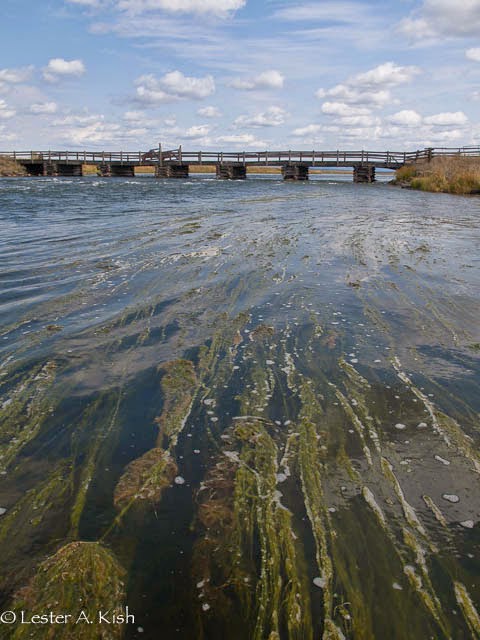 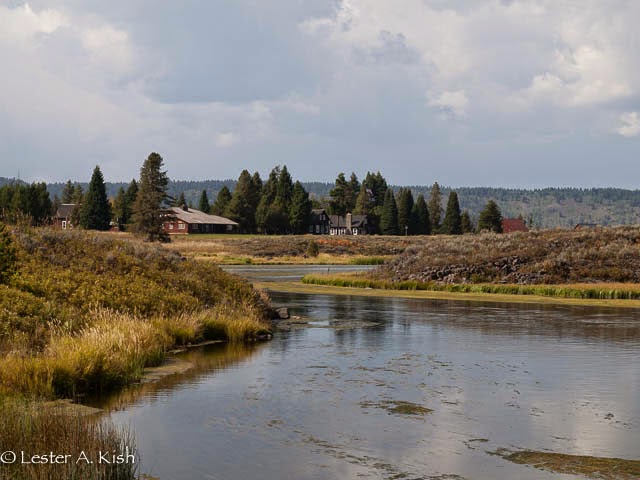 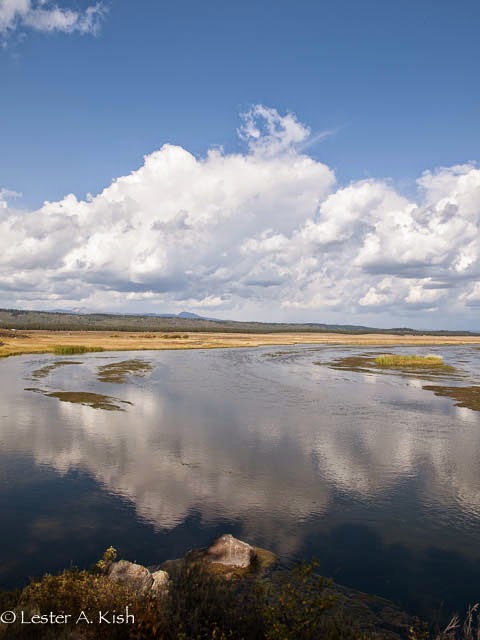 Next time I go back, I'll be eager to see if I'm good (lucky) enough to catch two fish!