Yesterday On The Creek

It's quite a change in venue, visiting the creek this time of year.  Especially when compared to the quiet starkness of winter that I'm accustomed to.  June.  Profusion. An explosion of life and color. Pastures green, trees and shrubs leaf and bloom.  Birds sing and chatter incessantly from the streamside vegetation.  A day on this, or any creek for that matter, is a spectacular experience.  And that is a woefully inadequate understatement.

In spite of verdancy, and the activity of myriad critters, one key element is lacking.  Insect life. The vaunted hatches that bring trout to the surface have yet to commence.  Other than a couple of wayward caddis, no bugs.  PMD's are allegedly still days to weeks off.  When they appear, so do the fisherman, expectant and hopeful.

So, in a day filled with hope, but lacking surface feeding trout, I nymphed.  Essentially the same gig as winter.  Dry dropper.  Beetle dropper (which I couldn't see worth a darn).  Finally, I resorted the dreaded "Thingamabobber."  A small one, but at least I could see it.  The fly(s) du jour?  The usual suspects.  Midge pupa, pheasant tail, small bead head whatever.  I think the highlight of the day was being able to repeatedly knot 6X to my fly, usually on the first or second try.  Well, that and getting my waders on.

The first fish of the day was, surprisingly, a cutthroat.  It was a first too in that I'd never caught one on the creek before.  The word is that a few, intent on spawning, run into the creek from the Yellowstone each year.  This one already appeared spent. 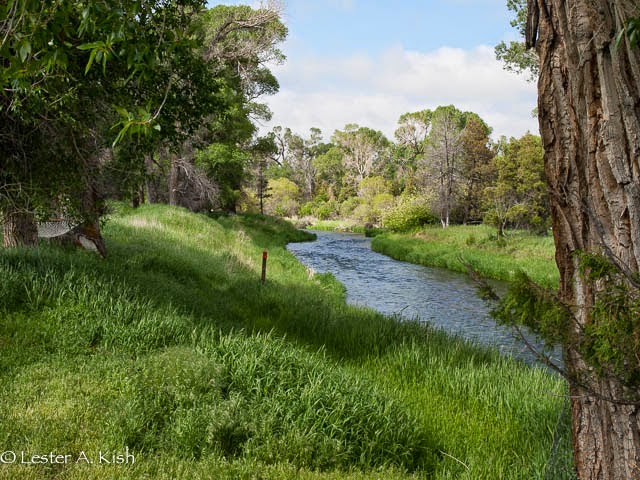 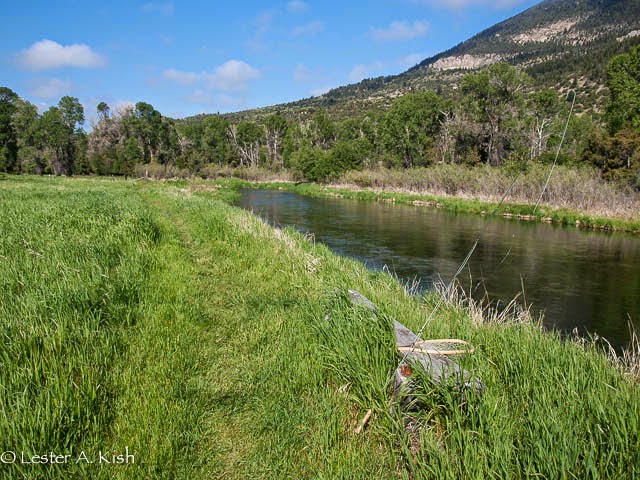 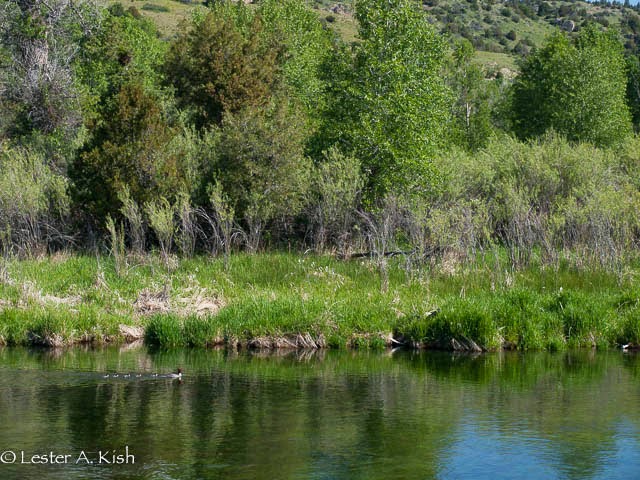 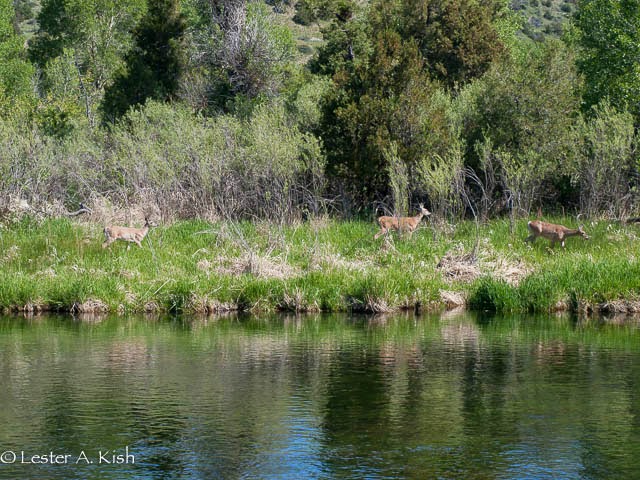 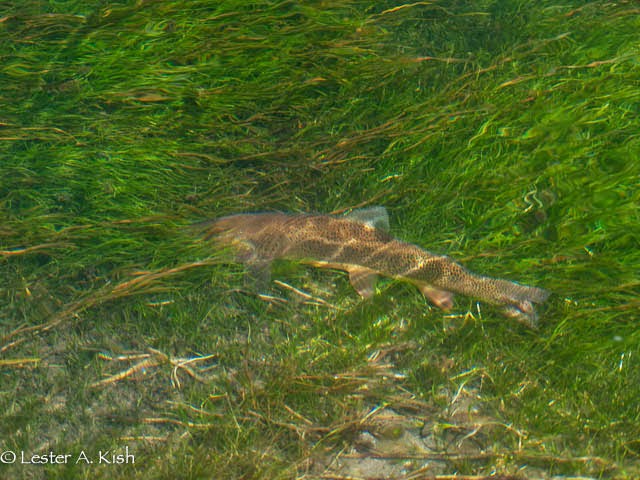 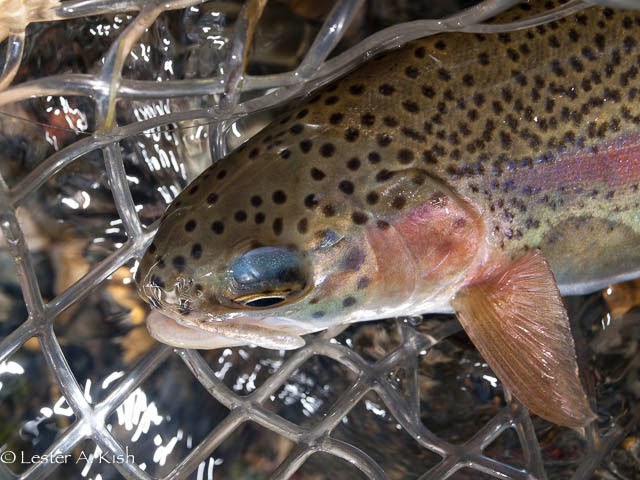 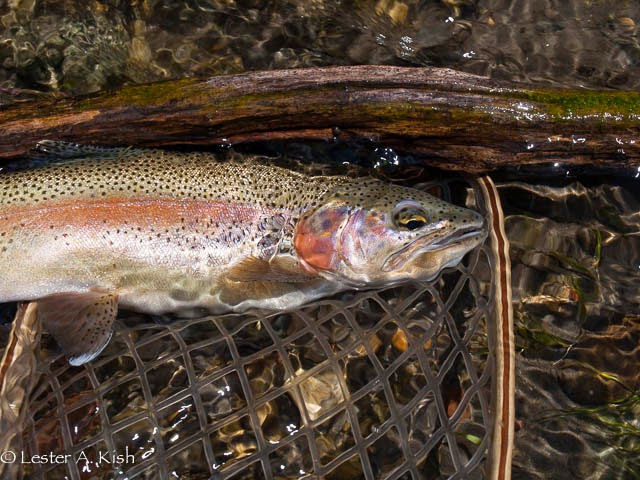 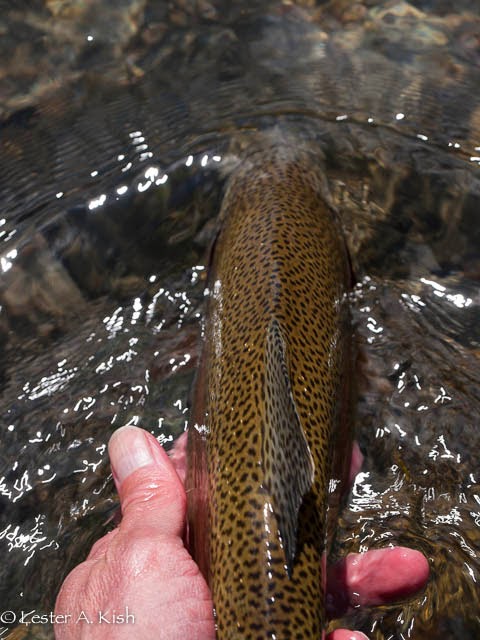 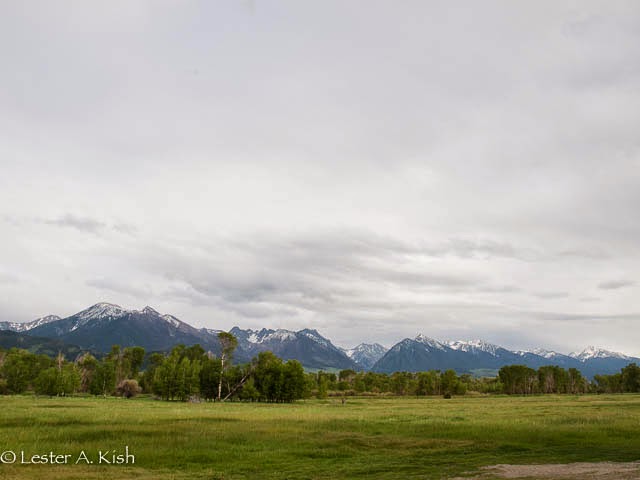 I finished the day stripping a streamer. I had a few chases, a couple of half hearted grabs.  The browns were there, but they didn't want to climb on for keeps.  That was ok.

I didn't expect to make it the whole day.  Eight-thirty.  A small victory, my first day out since February.

As the shadows lengthened, the fields filled with feeding deer.  Lots of does, plump with soon to be born fawns.   Meanwhile, last years unspotted fawns playfully chased each other in the high grass.  Carefree, as we should all be.

Bill Trussell said…
Lester
First off outstanding post; what I would give to have a stream like that here to fish for trout. I just feel one can get closer to what true trout fishing is when they are fishing free stone waters. Beautiful trout on a stream with no back cast worries. Thanks for sharing
June 8, 2014 at 12:26 PM

Lester Kish said…
Thanks Bill, glad you enjoyed the post. It was a tremendous day. I usually don't fish the creek outside of the winter season. Going into the summer hatch season, angler activity increases, as does the daily rod fee. Yesterday was in-between seasons, few anglers, fewer bugs. Still worth it though.

Obstacles or not, I still worry about my backcast. Forward cast too for that matter! Seriously though, there are parts of the creek where brush crowds the bank. Good for practicing steeple casts, roll casts, etc.

Anonymous said…
Very pretty water, I must say. With cutthroats even. I'm glad you're getting into classic form again. I knew you were recuping but didn't realize it had been 3 months. Enjoy!
June 8, 2014 at 5:42 PM

Lester Kish said…
Thanks Walt, pretty water it is. I was beginning to wonder if I'd ever cobble another post together. I can sit long enough to make it "over the hill" to Livingston. From there, it's only a couple more miles to the creek. A folding lawn chair placed under a big tree makes for a comfortable mid-day break.
June 8, 2014 at 9:18 PM

Anonymous said…
Lester: Nice report and photos of the Creek. I fished it once...beautiful spot. Buzz's fly shop is the best. I like the photo of the trout underwater in the river grass and the dorsal/back shot of one ready to be released. Also, some good humor in post. I'll check in more often.
Robert Garnier
June 9, 2014 at 5:37 PM

Lester Kish said…
Hi Robert, thanks for stopping by. It is a cool place, and a neat little fly shop to boot.

By the way, I think I ran into the snake that you mentioned in your last post. Your guesstimate as to length was spot on...a five footer for sure.