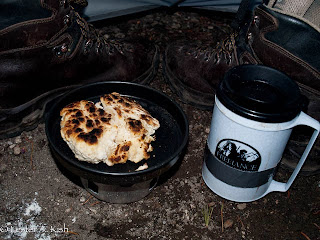 This photo brings back memories of a night spent at Thompson Lake in the Spanish Peaks a couple of years ago.  It was August.  A time of heat, dryness.  When I hit the trail at sunrise, snow dusted the peaks.  Five miles in, it started to rain.  Shortly after, it turned to snow.  August?

This was breakfast.  Bannock.  Simple and good, it's a staple and favorite. Low carb?  Baloney (or rather, bologna for you purists).  Not for me.  When I crave fresh bread, which is often, I'll whip up a batch, even at home.  For this batch, I'd measured enough mix into a snack baggie to make one bannock patty.  First, I made a cup of coffee on the little alcohol stove. Then, mixed the batter, formed it into a patty and popped it into the pan.

My boots?  They're an attempt at a windbreak and the inspiration for this post.  More on this later. Thankfully I didn't burn down the tent.  It was a one man structure.  Still is for that matter, since I didn't burn it down.  Too low to sit up, I could only rest on elbows. I've since taken to packing a tent that allows for assuming a non-sluglike posture.

The title of this piece?  Hellroaring?   Well, Thompson Lake sits near the headwaters of the North Fork of Hellroaring Creek.  It's aptly named because of the…….wind.  It can be calm one moment. The next?  Well, hang onto your…you fill in the body part.

The wind, it starts up-drainage, seemingly moments after one has crawled into their sleeping bag. One first notices a strange, eerie sound. A low moan that morphs into a wail. It builds gradually. Then, the sound, or rather, the meteorological feature that created it, slams into the tent, trying to lift it from this earth and deposit it at some lower elevation.  Relentless, it continues all night long. Sleep?  I don't think that the dead would get any if camped here.  It blows so hard that one thinks that it won't stop 'til it hits the Gallatin.  But, it doesn't stop there.  It makes a hard left and continues until it ends up near Three Forks, Montana. While camped near the headwaters of the Missouri River, Lewis and Clark likely breathed air containing molecules that originated in Hellroaring.  Maybe they made bannock too?