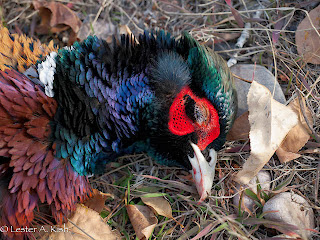 We got away for a few hours on Saturday.  The dogs needed work.  We needed exercise.  The forecast looked pretty good.  Getting to pheasant country in Montana often involves sitting in a vehicle while driving hundreds of miles.  That luxury was not ours.  So we did the next best thing, we went the route of the shooting preserve.  Considering fuel and time and the condition of my back (there is no such thing as a comfortable seat, in any vehicle), it was a good choice. We'd been to Sanborn's before.  Handy, nice cover, good birds, pretty views too.

Emma was the first dog to hit the field.  She settled down after the obligatory initial craziness.  We encountered quite a few birds that had survived hunts from previous days.  They were cagey and flushed wild.

Now, pheasants and pointing dogs are not a match made in heaven.  Play fair?  You gotta be kidding. Even released birds have a survival instinct that's second to none.  Springsteen wrote the song, pheasants wrote the book.  Born to run.  Make that run like hell. Drives pointing dogs nuts. Not to mention the owner. 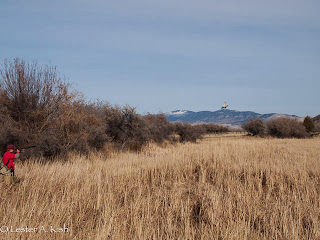 We watched several birds sail away unscathed. Emma went on point near some buffaloberry. Buffaloberry?  Thick, tall, thorny.  Great bird cover.  Roosters know it.  Dog points on one side.  Bird plays by its own rules and runs out the other.  Dirty SOB.  If you're lucky, really lucky, and you've said your prayers and are wearing lucky underwear, maybe just maybe, the bird will make a tactical error and you'll get a whack.  This time, the sun, moon and stars aligned.  Actually, the buffaloberry clump was small.  Emma pointed, Jo circled, the bird flushed, end of story.  Well not really. As the bird folded another flushed.  It's visible in the picture (click on it).  One bird going down, then there's a flash of wings through the buffaloberry.  Two roosters, together.  Emma tried to retrieve both, simultaneously. It's a big mouthful.  She bought them back one at a time. 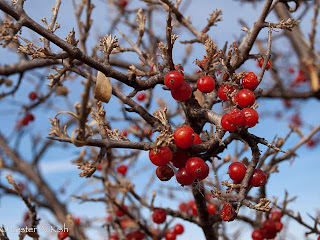 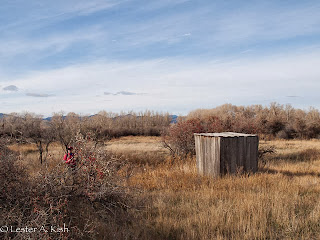 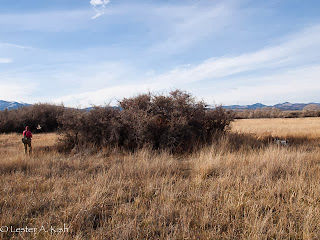 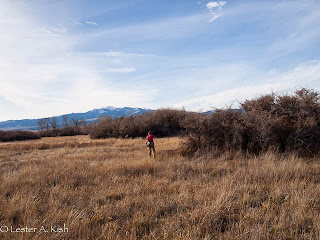 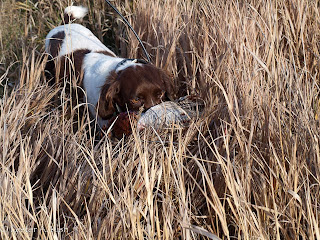 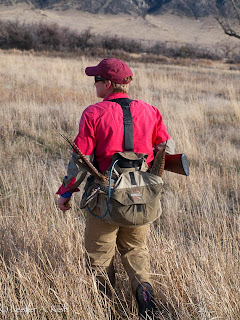 We went to another field, visited with Bob Sanborn for a while.  It was Maggie's turn.  The girls took off and made a big circle through the field. Maggie worked back into the wind.  She lined up, locked up.  Perfect.  Well, not so much.  There was scent, but no bird.  Maggie was released, trailed scent, went on point again, to no avail.  This bird, just released, wasted no time getting out of town. Another point, same result.  We approached a clump of chest high wildrye.  Just beyond, the cover grew sparse before thickening into a brushy stream bottom. We took a few steps, the wheels started turning, and we thought, "Uh, Oh, he's probably behind us."  He was.  Jo dumped him as he sailed into an adjacent field.  Maggie tried to run through a sheep tight fence for the retrieve.  That wasn't going to happen.  I called her to a gate, lifted the top wire, and she scooted under the bottom strand. She returned with a proudly fetched the bird. A good piece of work for a little bird dog. Bob, watched the whole event and was surprised at how far and how quick the rooster had run. 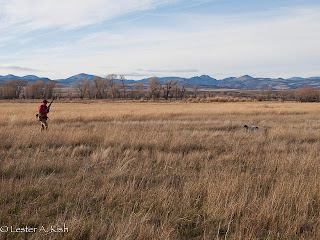 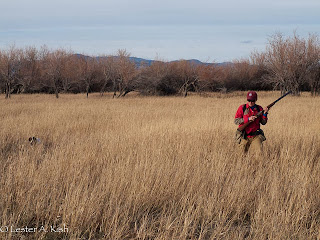 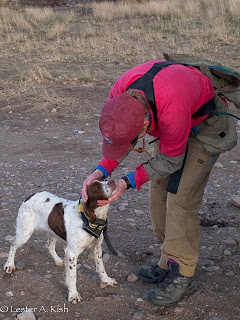 It was late afternoon, but there was still time to work another field.   Jo put Addie and Maggie down together.  Meanwhile, I drove on ahead while they hunted into the wind.  The plan was to meet back at the parking area.  Just as I drew even with dogs and hunter, one dog went on point, then the other.  I drove on, looked into the rearview mirror in time to see Jo step in, flush and shoot the bird.  This one was a survivor from a previous day.  I was able to get the retrieve on digital media (doesn't quite sound as good as capturing an image on film, does it?). 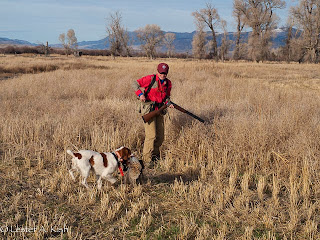 A good day.  We drove home in the golden late afternoon light.  The mountains were beautiful. 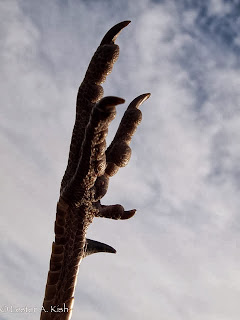