Of Browns and Beetles 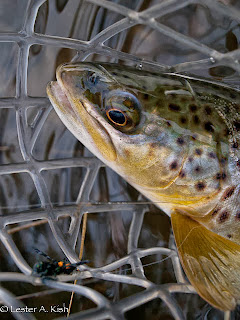 A few weeks back, I fished a small creek that wound lazily through a meadow.  Once in a great while a fish would rise.  It wasn't a feeding frenzy.  I had no clue as to what they were taking.  There were no winged insects.  Couldn't see much of anything drifting in stream either.  I remembered reading "When in doubt, use a beetle", courtesy of Mike Lawson.

So I stripped off some line, measured my cast and sent the beetle on it's way.  A couple of funky drifts and I figured out the current.  A fish rose again.  Out went another cast.  The fish took.  A nice little brown.  I got three more out of that little run.  Clearly, they liked the beetle.

It's a simple tie. I used whatever material was available.  In this case, a dubbed body of peacock ice dub, some black electronics foam packing, black flashabou for legs, orange post for visability.

This version is a low rider. Even with a short line, it was a $#%h? to see.  When a fish rose wherever I thought the fly to be, I struck.  Invariably something had taken the beetle.

I hunted heads for the next couple of hours.  Most were willing to take the beetle.  It was a nice productive, instructive evening.

This winter, I'll have to reengineer the fly with I strobe light or something to enhance its visibility. 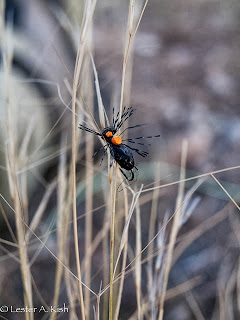