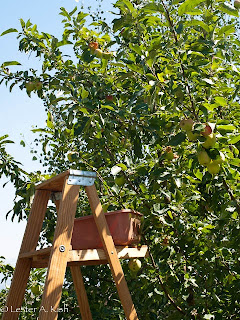 Our kitchen and hallway are now filled with the wonderful aroma of ripe apples.  I picked them weeks ago.  Not by choice, but out of necessity.  They weren't quite ripe, but I figured that if I wanted any for our own eating, that I'd better pick some. Danged birds just couldn't leave them alone.  Why is it that they have to peck each and every piece of fruit just as soon as it shows the slightest tinge of color? No matter, they're still great eating.  They make great applesauce, bake well too.  Apple cobbler is cooling on the stovetop as I write this.  Soon it will be graced with a dollop of vanilla ice cream.

The tree is a Mantet apple purchased locally from Cashman Nursery.  Fragrant and flavorful, it ripens early, which was one of the reasons for its purchase.  Now ten years old, the tree produces well.  It's just a battle beating the birds to the fruit.  It would be nice if we could leave the fruit on the tree just a little longer so that it could ripen fully.  Tonight I found an apple that had escaped the beaks of the inquisitive birds.  Fully ripe, it was delicious, pretty too. 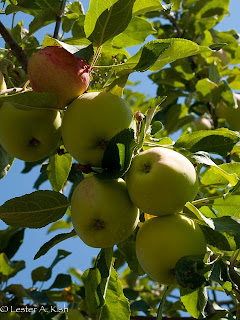 One of the few things that I miss from my youth on the Eastern seaboard is the roadside apple stands that appeared each autumn.  Little stands with rows of wooden baskets heaped with fruit. We'd buy a couple of bushel baskets full, and store them in the basement.  The house soon filled with the aroma of ripe apples.  My mom, baker extraordinaire that she was, never mastered the classic American pie crust.  She did however, bake up a sheet pan type of pie that was to die for.  It was a Hungarian dish called Almas Pite, which roughly translated to…. Hungarian apple pie. It was cut into squares and sometimes dusted with confectioners sugar. For a lover of all things apple (insert me!), it was a true delight.  I ate my fill when I had the chance. 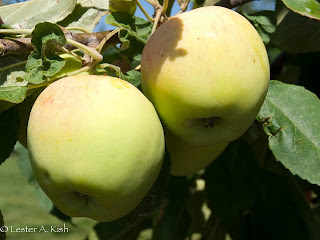 Another time, I was just in from a successful white sheep hunt in the Northwest Territories with Bill and Carol Mckenzie.    Off the end of the floatplane dock, a 55 gallon barrel was situated just so in the lake.  Wire racks were suspended above the surface of the cold lake.  Covered with a lid, the barrel served as a cooler.

I was walking down to the dock; Carol was retrieving a couple of just set lemon meringue pies.

Hmmm…. pies I said.
"Do you like lemon meringue?"
Not one to turn down fresh baked goods I could only reply "sure".
"But Carol, you know there's only one kind of pie."
"Really?" she quizzed. "And what kind is that?"

That night at dinner there were two.

Carol tried, unsuccessfully, to fatten me up for the remainder of the trip.
"Now you come in here and grab a cookie, better have a couple, you're so skinny".
"How about a piece of apple pie too?"

I have fond memories of my Mom's baking, the trip to the Canadian wilderness and the Palmer Lake base camp.  And to think, apples were involved in all.

Next week… the State of the Plum address.  The one year anniversary of this goofy little blog.  The plums are ripening.  The steelhead are coming! 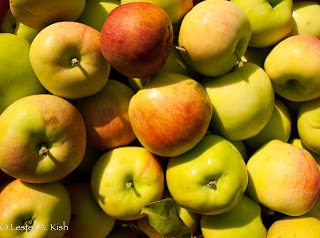