A Summer Day on the Missouri River 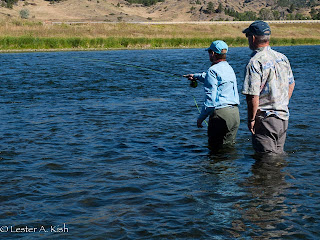 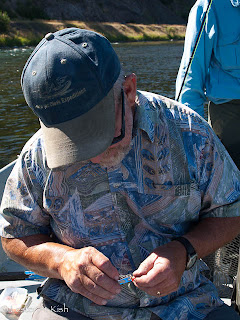 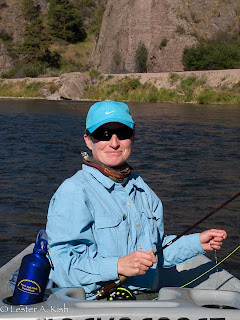 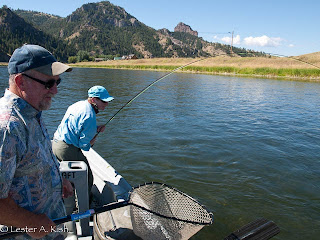 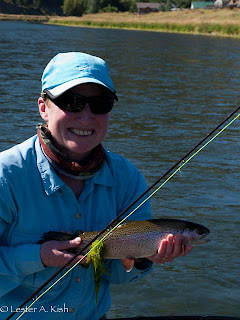 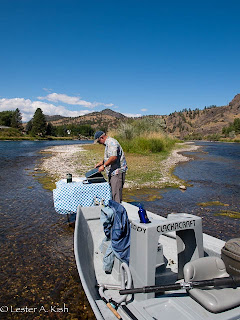 After a few days of backpacking, we decided that a vacation day of fishing would be nice.  It was a spur of the moment decision.  When I contacted the folks at Crosscurrents in Craig, we knew that hooking up with a guide on such short notice would be pretty tough.  But, they soon called back. Done deal.  Just show up.  Tomorrow morning.

We arrived in Craig at 6:30, met our guide, Mike Geary, and were promptly on our way to the put in.
We lucked out.  Jo and I are both pretty low key anglers.  Mike, pleasant, easy going and affable, also happens to be an outfitter and owner of Lewis and Clark Expeditions.  He runs trips on Montana's Smith River and is most active in Project Healing Waters.  Quite a guy.  Once we got on the water, it didn't take long to realize that sitting in a boat is a hell of a lot easier than lugging a pack up a trail.

It was a bright, blue sky, August day. With temperatures forecast in the eighties, it would be a wet wading day. Other than a few stray puffs of breeze in mid- afternoon, the day was calm. The water was low and clear.  There was plenty of floating vegetation to contend with.

Bugs? None.  We laughed about touted hatches of biblical proportions that didn't materialize.  Tricos? I think we saw six. Hoppers?  Nah.  They were busy pillaging some farmers distant field, like in Utah. I did cast a sandwich sized foam imitation though.  They float good and you can see 'em.  We got a few on nymphs.  Jo got one on the venerable San Juan worm.  I spent the better part of the afternoon chucking a streamer.  I moved several fish, but couldn't get them to open their gaping jaws.

All in all, a pleasant day on the water.