A Path Half Beaten 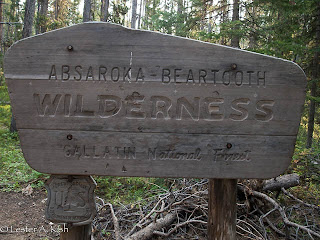 With August winding down I had one last chance to strap on a pack before the arrival of September. Summer, so slow to arrive, then it's gone in a flash.  Working every other weekend as I do, it passes even more quickly.

I left home before 5 a.m.  It's a slow drive through the Paradise Valley while dodging deer.  This particular morning, several nice whitetail bucks were intent on ending their lives prematurely as they ran across the highway.  My car survived this part of the trip without needing any auto body work. Then, there's the drive through the Park.  Tourists.  Enough said. 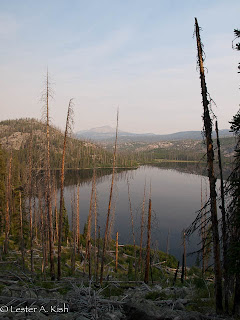 I arrived at the Clark Fork trailhead, loaded up and hit the trail by 8 a.m.  The first few miles of the trail are rather so-so.  It's hiking through the lodgepole forest while trying to avoid stepping on horse apples.  The section along Kersey Lake passes through an old burn and allows views of the surrounding mountains. Then it's back into the timber for another couple of miles.  Russell Creek signals a welcome relief from the aforementioned grind through the timber.  The views improve and the sounds of the creek are most soothing.  Russell Lake is reached after a bit of a climb and a couple more miles. It's a nice place for a break.  Many folks camp here.  It's a popular destination for the horse packers as well.  Unfortunately, the area has been heavily impacted by a history of use. This morning, there were no human or equine campers in the vicinity.  I felt good, so I pressed on. 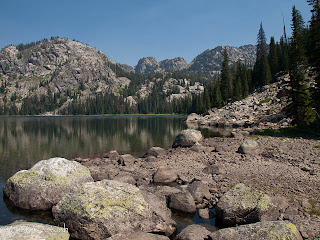 The next section of trail climbs to a bench area.  Finding a nice streamlet, I stopped for a break, snacked, and tanked up on water.  Another climb and Ouzel Lake appears along the trail.  It's a pretty spot. 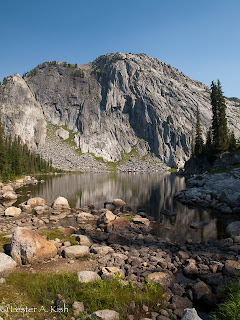 Around the horn from Ouzel is Bald Knob Lake.  It's a stunning combination of timber, meadow, lake and rock face.  It kind of reminds me of a Montana version of the Half Dome in Yosemite.  I had planned to camp here, but it was barely past noon and I felt pretty good, so I pressed on yet again. 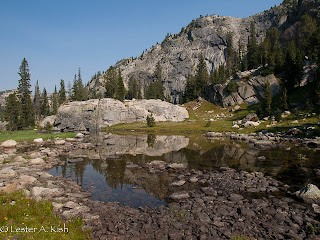 The next section offers killer views clear to the top of the Russell/East Rosebud divide.  It's pretty much all meadow with a few stringers of trees.  A little earlier in the year, the wildflower show is beyond description.  By the latter part of August, things have dried up, the flowers mostly done. Still, there are enough to keep a person snapping photos, especially along the springs and streams.

I made it to Skull Lake and started thinking about calling it good for the day.  Still early, I climbed up to Pablo and Picasso Lakes but was disappointed by the scarcity of suitable camping sites.  Dummy me, I was so intent on spending the night that I'd unloaded my pack.  With clouds building, I wasted no time stuffing gear back into my pack.  Mountain storms, even brief ones, can be spectacular.  I didn't want to get caught without shelter, so down the hill I went, past Skull and over to Fulcrum Lake. 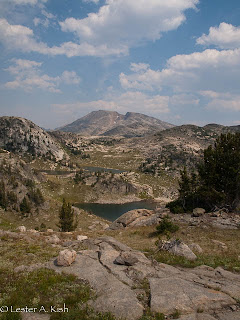 At this point I had finally started to run out of gas.  My legs and feet said "Enough!" I settled on not the best of campsites, but the view was pretty.  With camp set up I took a stroll around the lake, feet protesting all along the way.  Fish activity was nil and I only saw a couple of rises.

There a lot's of dinner options for the backpacker.  But, as I despise doing dishes along the trail, I've settled on Mountain House meals. No cooking, just boil water.  Freeze dried food sure has come a long way.  I was impressed with the flavor and quality on a sheep hunt years ago.  Today, I think that it's better yet.  More flavor choices and more manufacturers too.  Tonight, supper was a Mountain House white bean chicken chili.  It was pretty good.  Low sodium, flavorful and filling.

After supper I strolled back down to the lake, hooked a fish, got a couple of good pulls, and it was off.  Never saw it.  That concluded the days fishing.

It had been pretty breezy to this point.  By the time that I crawled into the tent the clouds had blown out.  I feared the night of the flapping tent fly. But, with darkness the wind died down.  It was dead calm, profoundly quiet.  Warm too.  My new light down bag (North Face Gold Kazoo) was overkill.

I was up before dawn, boiled water for coffee and snacked on granola.  Then it was down to the lake for a few casts.  The sun had yet to rise, but I could see that this would be a great morning for reflections.  So, back to the tent for the tripod I went.  I shot a few photos, the reflections just kept getting better.  The sunrise was too much.  Everything just glowed. 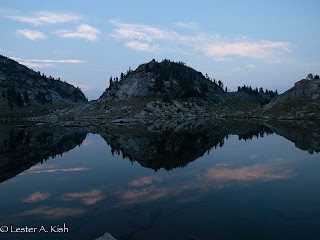 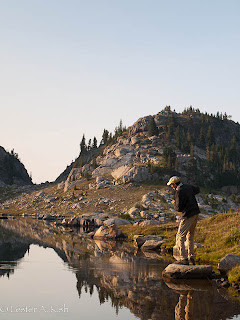 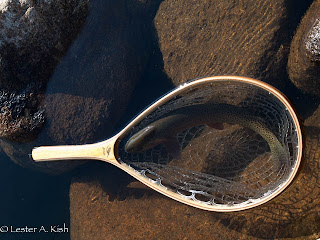 I fished my way around the lake again.  I wanted to take advantage of the shade and calm conditions.  Few fish rose.  I don't think that many remained from the previous plant.  But, I did hook a couple and finally managed to land one, a nice cutthroat.  It was strong, beautiful and in good condition.

I broke camp and climbed up to the trail.  Along the way I met a couple from Bozeman who were hiking on through to the East Rosebud.  We exchanged pleasantries and took photos of each other. They indicated that they had met a game warden on the trail.  Now that would be quite the job, backpacking and checking fishing licenses in the backcountry of Montana!

Fossil Lake was it's usual stunning self.  Like many places that I've been, pictures just can't capture it.  I call it "bigness."  Looking through the viewfinder, one can't see and feel all that is around oneself.

Fossil is a big clear water lake.  This trip, the lake levels were lower than last, with more exposed shoreline.  Fish could be seen rising and cruising near shore. I caught several while making my way to camp. 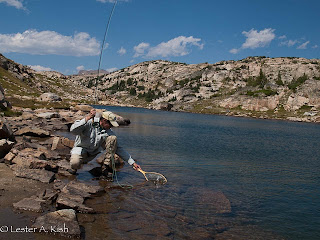 It was barely noon and I was settled in for the day.  With camp set up, it was time for a snack. Afterwards, I walked along the lake, fishing a little, taking a few photos.  It was bright and I was flirting with a migraine.  Was it a headache, altitude, dehydration?  Perhaps all of the above. I found what little shade I could and stretched out for a nap.   The breeze kept the bugs at bay and I was able to kick back and relax.  A few clouds scudded by and smoke from nearby forest fires started to roll in.  The mountains soon were shrouded in a smoky haze.

I got up, relieved that the headache had abated.  Down the lake, a party of six hikers were strapping on packs, ready to head out.  It was around 4 p.m.  I thought that they had time to make it to the trailhead if they set a brisk pace with few stops.

Dinner tonight would be early, this would allow more time to putter around and fish once the wind laid down.  My dinner setup is pretty simple.  Trangia alcohol stove, fuel, Mountain House dinner, and a spoon.  There might be cheaper options, but this is convenient.  And as I've said before, no dishes either.  Tonight it was New Orleans Style Rice with Shrimp and Ham.  Pretty good.  Rehydration, what a concept. 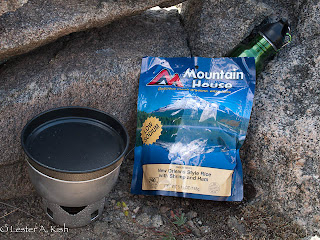 I spent a leisurely evening strolling around the lakeshore, casting occasionally to cruising trout.  I stopped often just to admire the view.  As the sun started to set, the wind laid down.  It just got better.  The highlight of the trip was sitting by the lakeshore watching fish rise by the moonlight.  It was a rare, warm, calm evening at near 10,000 feet.  What a day.

Next morning, what to do?  Up again before dawn, I sat and waited for the sunrise.  It was calm yet again, fish were rising around the lake as the eastern sky began to glow with the first hint of daylight. As the morning brightened, the sun touched the peaks with morning alpenglow. Another morning to reflect on reflections.  Simply gorgeous, it was warm by 7:30 a.m.  I dallied too long, but how often does one get to enjoy this?  The memories and photos would keep me warm and smiling throughout the winter. 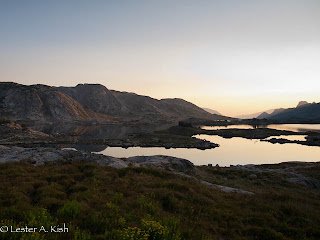 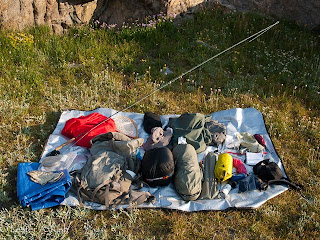 It was still hazy with smoke, fine particles of ash had settled on the tent fly during the night. I broke camp, packed and prepared for the hike out.  I had a date with some brook trout along the way, so the rod remained rigged.  Back over the divide, I paused while admiring the view of Windy (Fizzle) Lake.  Further along the trail, a nice bunch of flowers in the stream rocks made me pause for a few photos.  I noticed the shuck of a stonefly nymph.  Didn't know they were up this high.  A hummingbird buzzed by and checked out the same bunch of monkeyflowers. 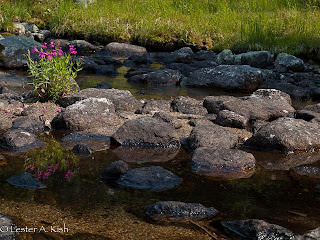 The brook trout in Skull Lake were most cooperative.  Some casts would produce five or six pulls before a fish would manage to hook itself.  I tried to see how many fish would fit in my net. Six seemed to be the magic number.  Each time I'd add one, one would jump out.  I let them go, took one last cast,  reeled as fast as I could and still couldn't keep a fish from hooking itself.  It was a whopper.  Nine inches. 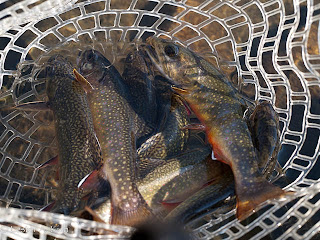 So, out I went.  Once, a peregrine falcon flew by on a strafing run.  Whoosh!  That was cool.

I stopped a couple of times for lengthy breaks to pound some water and snack.  I must not have eaten enough because the pack just seemed to be getting heavier.  On the way out, I encountered two parties of backpackers intent on hiking the "beaten path" from Cooke City through to the East Rosebud trailhead. Me? I was content to beat only half of the path, to Fossil Lake and back.  Maybe I'll try the other side someday.