I've bumped my way up the Portal Creek road a bunch of times over the past forty years.  Each trip reaffirms the fact that the road sucks.  Each rock threatens to jar the fillings out of ones teeth.  I quipped  that James Bond would have loved this road.  His martini would have been extremely well shaken.  Of course he would have thrown his drink all over the ceiling of his vehicle.

The trailhead serves double duty as it's the jumping off place for two trails.  One accesses Windy Pass (a nice hike in it's own right), the other heads off to the Golden Trout Lakes.  Neither trail is terribly difficult.  A fit hiker can probably make it to either destination in an hour or so.  Given the distance and relative ease of hiking, this makes for a nice day or morning hike (for those wanting to beat the heat).  Nearby Eaglehead Mountain and the crest of the Gallatin Range make for nice jaunts for those who choose to base camp at the lake. 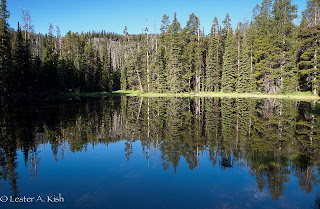 It was a pretty day and most comfortable for hiking.  After pausing briefly to snap a few photos, we reached the lake and found that we had it to ourselves.  We did a quick walk around the lake hoping to spot some fish. I'm accustomed to seeing at least some activity. On previous trips, fish regularly dimpled the surface.  This time we saw virtually no riseforms. Once, a four incher snatched a mosquito near shore.  Later, a whopper of eight or nine inches swam by.  I can't help but wonder if the fish had died out.  Or, maybe they've been hammered by the constant fishing pressure.  Maybe they were just waiting for me to leave. 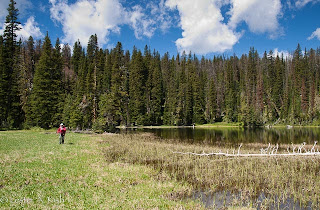 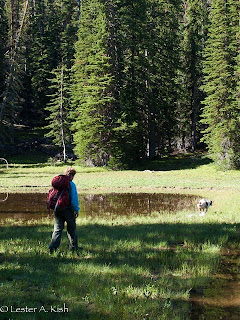 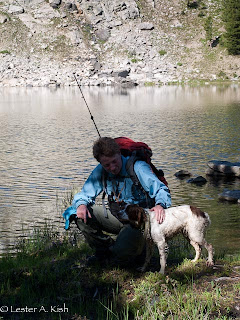 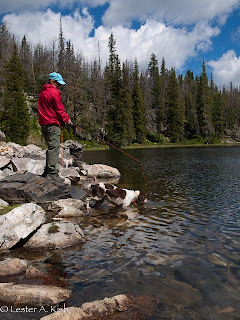 We decided to check out a pothole that lies to the east of the main lake.  It turned out to be barren. Somewhere en route, Emma disappeared.  We backtracked through the timber, picked up the trail and made it back to the main lake in time to find that a couple of other parties of hikers had arrived. I thought that I saw some movement across the lake.  One of the hikers offered the use of his binoculars.  Glancing back across the lake confirmed that our "lost" dog had returned to the spot where we had stopped to rig our rods and have lunch.  We made our way over, calling.  She was reluctant to leave her spot.  Clearly spooked, and a little beaten up, she was really happy to see her humans.  We learned that some dogs will return to the last place that they had been fed.

A few more folks showed up.  Given the lack of cooperation from the fish and increasing congestion around the lake, we agreed that it was time to pick our way back to the trailhead.

Both dogs limped out.  Scrambling over rocks and romping through and over blowdowns is tough on bird dogs.  They go one speed.  All out.  Consequently, they get beat up.  My plantar fasciitis had been acting up over the past few weeks, so I limped out too.

We passed several more parties of backpackers on our way out.  Most carried fishing rods.  I imagine that the lake was worked to a froth later that day.

Bug dope is highly recommended unless one has blood to spare.  Bear spray is a good idea too. Although, I suspect any bear bumbling it's way through the area would lay low due to the amount of human activity.