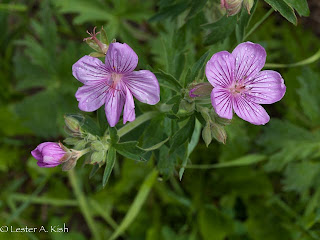 Today, the first day of summer, I take a drive in search of solitude and maybe a few fish.  Time to unplug from the mental and physical grind of work and the toll that it takes.  The day starts cool. There's sun and clouds.  An occasional shower.  A hint of breeze.  A little fleece feels just right.

I start the day by nymphing.  The first few passes come up short, so I add some shot.  That's better. A rainbow promptly grabs my offering.  I admire the fish and let it slip gently from the net, all the while eyeing a submerged root mass. Someone that I want to meet probably lives there. Then, I notice a splash tight against some overhanging willow.  Really?  Not sure.  I resume my fishing. Another splash.  Ah, I wasn't dreaming.  I take a few more fish on the nymph and decide to move on. 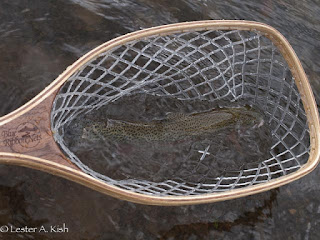 The next run holds several rising fish.  I sneak to the tail of the pool, well back from the bank.  I'd like to catch a few of these.  No need to put the fish down. I sit and watch.  Convinced that the fish are serious about dining a la surface, I change leaders.  Poking a finger through an ancient selection of dries,  I decide on a little stimulator.  It floats like a cork.  Best of all, I can see it and watch its progress as it drifts patiently while awaiting it's eventual meeting with destiny.  Several rainbows approve of my choice of pattern. The browns are tougher.  But I get a few.  Most satisfying.  Is it pattern?  Presentation?  Timing? 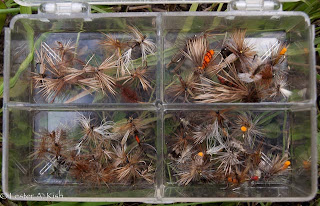 I'm pleased with my slack line casting. Granted, the casts are short, up against the bank when they need to be.  Nice drifts.  Today, I win, drag loses.

As the afternoon progresses, the PMD's show, then the caddis.  Somehow the PMD moniker doesn't seem appropriate.  Maybe I'll call them PAD's, with due respect to the time of day. 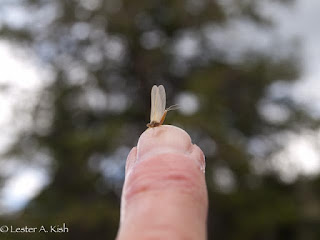 By late afternoon, I call it good and kick back in some bank side grass.  Time to reflect.  Another great day afield. Fishing wise, everything worked.  Dries, nymphs, soft hackles.  I've waited a long time for the trout bugs.  PMD's.  Caddis.  They showed up.  I just love those splashy rises. 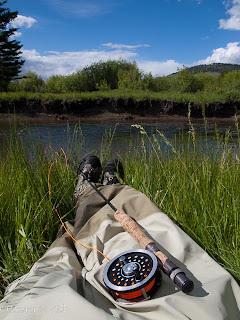 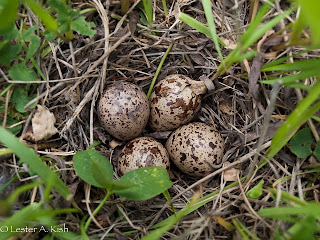 The first day of summer.