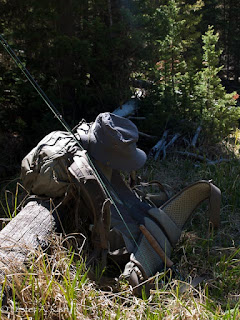 It's not much to look at.  Hell to get to.  No trail.  Blowdowns. Once there, it's just a puddle. 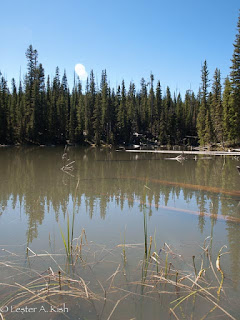 The water is perpetually murky.  There are a few submerged snags.  Above and behind, trees nudge the shoulder, as if to say…. "remember me?"  No problem. No fancy backcasts here.  Roll casts rule.

The tug on the line is always a surprise.  Rarely is there a rise to hint at the few modest resident rainbows that manage to scratch out a living.  Still, they're pretty.  Feisty and fat, another surprise for so early in the season.  They must eat well. 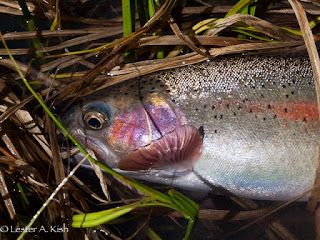 The fly du jour is a bead head prince.  Not a classic for fishing still water.  Today it's the ticket.  With just enough weight to carry it out on a roll cast, it disappears into the murk.  Twitched back slowly, the fish confirm that it looks like…..food. 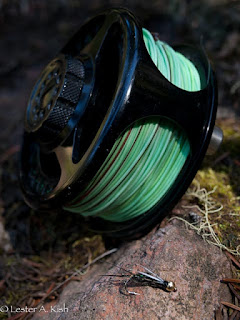 It's usually a mosquito factory.  Not today.   The bugs have yet to appear. One can sit in peace.  No need to keep moving.  No frantic arm waving while slapping at the whining hordes that are soon to come.  I revel. 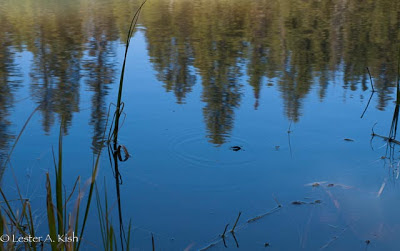 It's pleasant in the shade of timber.  Water striders skip carefree over the still water.  I take a few photos, break down the rod, stow the gear.

Satisfied with the morning fishing, I shoulder the pack.  It's been a few years, but on a previous visit I was left back peddling, clutching bear spray, safety off.  This day, there are no ursine encounters.  No game at all.  Just a few elk tracks.

By early afternoon the heat turns on.  Sweat trickles while I stumble through the lodgepole timber.