There was a time when he liked to fish.  Avidly perhaps.  No purist by any stretch.  He told stories of fishing in Hungary.  Fishing tackle?  Cane poles and hand lines.  This was long before the days of the Z-Axis and throwing tight loops.  Match the hatch?  Sure.  Just grab a blob of dough, roll it into a ball, put it onto a hook, and toss it into the slough.  That was the carp rig.  For pike the rigging was more sophisticated.  Matching the hatch for these toothy critters meant using baby carp.  He and his buddies would go out and seine a bunch.  He said that they made for the best bait.  They were lively and tough and lived for a long time.  Any extras were kept in a wooden barrel, ever ready for the next fishing trip. 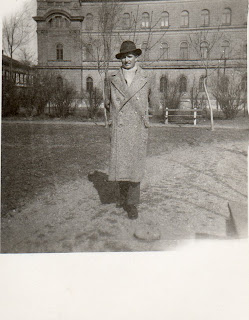 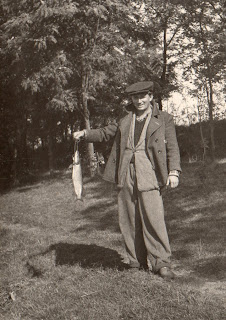 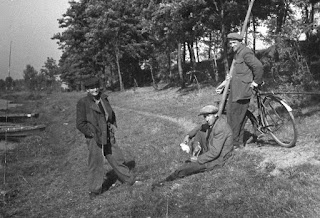 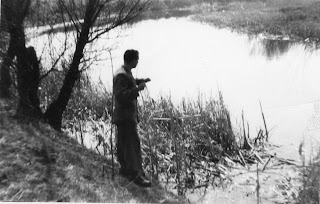 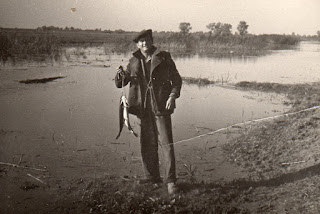 Transportation in those days was simple.  Just grab a bike and go.  Cane pole in one hand, bucket of baby carp in the other. Throw in some booze and kielbasa and it was party time.  If a person wanted to find out what the fishing was like, he just had to pick up and go.  Fancy SUV's and on demand fishing reports were not yet conceived.  Back then the Twitter feed from the Budapest Angler would probably have read "Bela slams 'em on the Danube!"

He worked as a foreman in a machine shop.  Next door was a distillery.  Occasionally, some part vital to the booze making process would break.  Naturally they came to Dad.  Of course, the machine shop was busy with a back log of work.  But, my enterprising Dad found a way to squeeze the repair into the busy shop schedule.  For a price.  What?  Bribery?  In a pre-Soviet block country? Surely a precedent setting event!  For only a few bottles of Hungarian hooch a rush was put on the repair. Soon the distillery was back in business and the nations security was ensured.  More importantly, Dad and his buddies were all set with libations for their next fishing trip.

When the Russians developed a liking for Hungarian cooking in 1956, my parents, along with many of their countrymen, decided that it was, as they say, "time to get the hell out of Dodge."  With my then twelve year old brother in tow, they barely made it to Austria before I was born.  Three months later our clan was en route to the United States.

In later years he lamented about life in the "old country".  More likely, it was a matter of missing the good old days of his youth.  We all do to some extent.  No doubt, it was a tough early existence, but it's who he was.

He would have been ninety-three today.  Happy birthday Pop.

As for the post title…. He had a habit, after a few fruitless casts, of saying "No Fish Here".  Fish could have been jumping into the boat and bouncing off of the back of his head.  If they weren't hooked to the end of his line, well, this just wasn't a very good fishing spot.  This amused Mom immensely.