The showers had stopped during the night.  The morning was relatively warm, no gloves needed to do camp chores.  Got coffee going and proceeded to break down camp.  Rest of crew did a good job getting it together and we were packed and on the river by nine a.m.. The float downriver to the takeout was short and uneventful.

Flight service arrived at 1:30 p.m.. A long day for the pilots. They sent three planes.  The flight out was nice.  I regretted packing away my camera.  The clouds parted.  Remaining fog would have made for some nice scenic mood shots.  The jagged western peaks were snow covered. Termination dust.  Winter is not long off in this country. The lower mountain slopes were beginning to show a little more color too.  Only spotted one small group of sheep on the way out.  Some of the others saw a few caribou.

The flight path was out through the Kongakut and into the headwaters of the Sheenjek.  Trees again! Smooth flight.  It was sunny and warm in Arctic Village.  The Caravan arrived forty-five minutes later. Wright Air did a good job coordinating the flights.  We made it back to Fairbanks by six p.m., got cleaned up, had dinner and bid each other farewell. 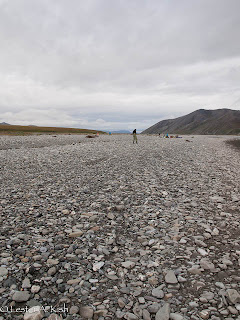 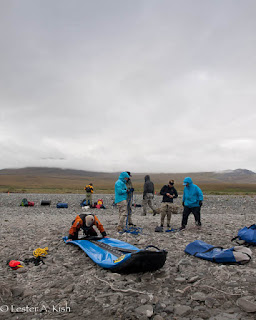 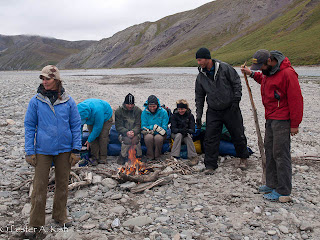 My fingers were pretty well trashed.  Four of five on right hand are taped and tender.  River travel and paddling are tough on the skin.  That along with constant immersion take their toll.  Everything that one picks up is covered in a fine layer of silt.  One would think it smooth, yet it's abrasive.  Bring lots of hand lotion!

We were extremely fortunate on this trip.  Weather and bugs were non factors.  My new tent did the job as did the air mattress.  I didn't sleep much in ten days, but it's not due to the gear or lack of comfort.  I'm already thinking about my next adventure.  Another river trip perhaps?

I was surprised at the relative lack of game. Were it not for grizzlies and robins, wildlife sightings would have been few.  Some rough-legged hawks, ground squirrels, a falcon, and northern shrike, a few dickie birds and mergansers.  Saw fewer sheep than expected, even ewes and lambs.  I expected rams to be scarce along the river corridor.  They typically hang at the heads of the side drainages.

Only would see one live caribou while on the river.  The rest must still have been on the coastal plain.  It must be quite the spectacle when they migrate through.

Interestingly, there were grasshoppers and hatching mayflies at our Caribou Pass camp.

This is the last of a series of posts from the Kongakut trip.  All associated posts can be accessed here.