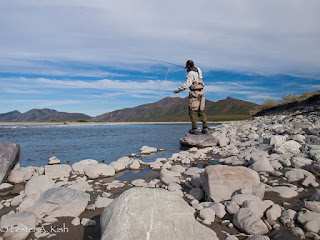 The last full day on the Kongakut --- The day that I've been waiting for.  Not because it was the last, but rather because it would be devoted strictly to fishing.  I noticed fishy looking pools on the downstream float.  I'd be back if the hike from camp was not too great.

The sun was already on the river when I got up.  It was breezy.  There was no fog.  No condensation.  Another blue sky morning.  The warmest yet. We had berry pancakes for breakfast.

Most of the crew took off and hiked south of camp.  They later indicated that getting to higher ground was tough due to the tussocks.

I had all day to hike upriver to fish, explore and take photos. Solo. Just me and the grizzlies.  I didn't run into any, but their numerous tracks indicated that they too preferred to travel along the river. 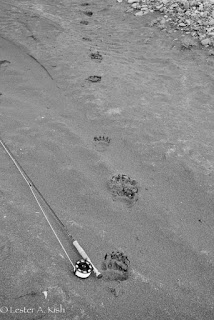 I climbed a bluff that overlooked the river and surveyed the route upstream.  It was a good opportunity to have a snack and take a few photos.  Looking over my shoulder I could see the hikers toiling up the nearby slope.


After a couple of miles of crossing braids and searching pools I began to fish my way back towards camp in earnest.  I covered a lot of water.  The char seemed to prefer the heads of pools or better yet.. the tailouts.  I wish that I would have tried skating a muddler, but I stuck with the conehead bugger, it worked.

The grayling were pretty much everywhere.  The slower pools usually held rising fish. Too bad that I had neglected to pack my lighter rod.  The grayling would have been most sporty on a dry fly.  They too took the conehead bugger readily.  One grayling jumped twice.  Most of the char jumped too. 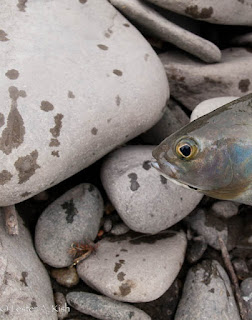 I fished my way back to camp and the returning hikers eventually caught up to me. I had just caught a few grayling and char when Mario indicated that a fish for dinner would be welcome.  Trying to get that fish turned out to be a challenge.  I eventually hooked one and proceeded to horse it in.  That was a costly mistake.  The rod bent deeply at its midsection and broke with a sickening snap.  I stared at the pieces in disbelief as if they would magically reattach themselves and the rod again become one.  Dinner got away to boot.

Overcast had built steadily during the day.  It started to sprinkle.  Everyone moved under the cover of the rain fly.  We played a round of Pass the Pig.  Then there was a major announcement.  The TP had run out.

Mario hiked above camp to call the flight service and verify pick up time.  We will have to get rolling early as pick up is between 11 and 12 the next morning.

Then the sun set, and, as it peeked underneath the clouds, the ground glowed.  A fitting end to the day and trip.