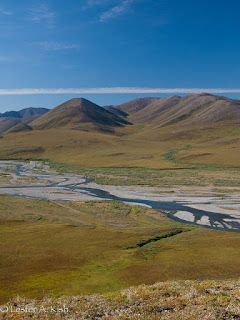 Got up real early.  Clear sky.  Moon.  Big time frost.  Made coffee.  Got fire going from last nights coals.  Sun rose over upper drainage.  Then fog rolled in.  Made rounds around camp with coffee pot.

Big hike today.  Incredibly clear.  Sunny and warmed quickly, the warmest day yet.  Maybe hit sixty-five degrees.  Saw distant griz.  Once on top could see ice in Demarcation Bay.  This was the end of the continent.  A sobering thought.  There was a vessel of some sort making its way across the bay. 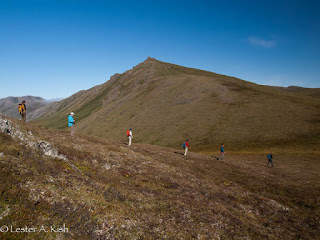 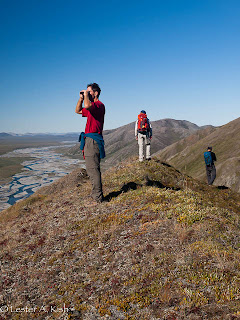 Saw five wolves on the way back to camp.  Three black, two gray.  They flushed a flock of ptarmigan, then systematically went about hunting for and re-flushing them in the willows.  The birds got pretty wild after being flushed a few times.

Back at camp, the rainfly had blown down.   It was put back up easily. Camp was ship shape in no time.

Tomorrow is the last full day.  Hopefully, it will be nice.  Crystal clear tonight.  Wind coming through Caribou Pass.

Plan to fish tomorrow.  Rest of crew might take one last hike.  Hit the rack early, for me.