Getting out in the winter can be a challenge.  Pick your days if you can.  Restless dogs.  Restless humans too.  A sunny Saturday was forecast.  Bird season was long over.  Still, the opportunity exists to work dogs if one doesn't mind hunting on a preserve.  We went.

The day was sunny, eventually warming into the low fifties.  The high mountain valley was bare of snow.  Wind? Yes.  Plenty.  Enough to move soil from the cropped fields.  We squinted a lot and chased our hats while getting peppered by airborne grit.

The birds.  Even though pen-reared, behaved as pheasants do.  The hens held tight, tight, tight.  The roosters ran like hell.  The brisk wind made for confounding scenting conditions for the dogs.  Tough for a pointing dog, or four.  It took a while, but they eventually sorted it out.  Pretty well actually, after the initial mayhem.  Once flushed, the birds flew extremely well.  Especially with the added benefit of a substantial wind under their wings.  But, the dogs got their birds. I acquired more fly tying material. Nice feathers. Pheasants have biots too.

The highlight of the day.  Something not often encountered, especially when hunting birds, out in the valley no less.  A mountain lion.  A rare, chance sighting.  I suspect that the numerous deer that lived in the river bottom were the draw.  The dogs treed what appreared to be a year old kitten.  It's mother then led the dogs on a merry chase while trying to draw attention away from the youngster. She succeeded, Jo rounded up the dogs, and the cats were left to dine on venison. 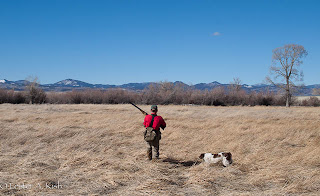 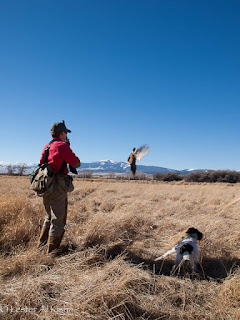 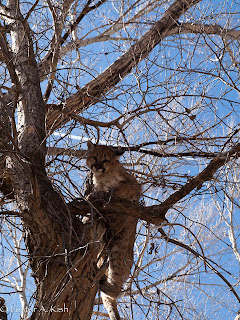 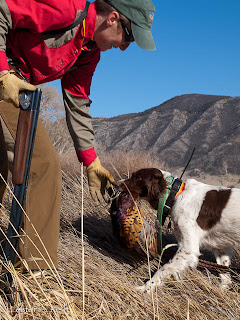 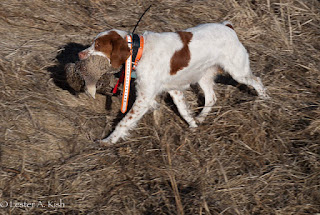