The Farthest Away River 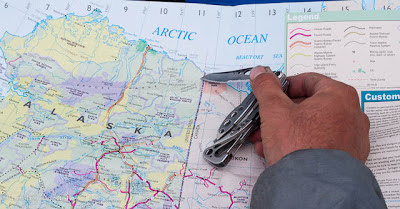 The native Inupiat called the Kongakut "the farthest away river."  In North America, it may just be. It's a long way from the lower forty eight.  The basic routine involves getting to Fairbanks, Alaska, boarding a smaller commercial flight to Arctic Village, and finally climbing into a supercub, courier, or some such small aircraft capable of landing on a remote gravel strip.

The Brooks Range had long been on my life list of must see places.  With my sheep hunting days largely behind me, and lacking the desire to pursue another white ram, I needed another excuse for a visit. Fortunately, hiking, camping, river exploration and fishing (see Arctic Char - An Underrated Game Fish) are continuing passions.  I initially dabbled with the idea of rafting the river solo.  But, common sense prevailed, and I signed on with Alaska Alpine Adventures.  With trip logistics no longer a concern, all I had to do was get my personal gear together.

Much has been written about the North Slope, Arctic National Wildlife Refuge , and the ongoing struggle between oil exploration and the maintenance of wilderness.  I'll not go into a diatribe on the subject. However, there was a time when an area was spared of development by virtue of it's remoteness.  Pity, it's no longer the case.

This then will be a daily accounting of the trip.  I'll make a series of posts in a daily journal format based on the notes that I'd scratched out that day.  We'll hike and paddle, camp on gravel bars, cast a fly for char and grayling, and enjoy the magnificent scenery of what has been called "America's Last Great Wilderness."  Enjoy!