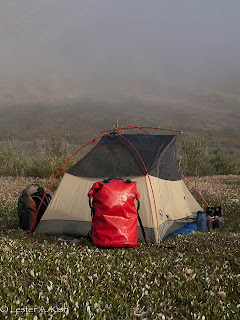 Up early, hours it seems ahead of crew.  Heavy dewfall, lots of condensation on tent fly. Took camera and hiked above camp trying to get sunrise shot of camp.  Fog rolled in.  Temp dropped, frost settled.    Pulled rainfly to dry. 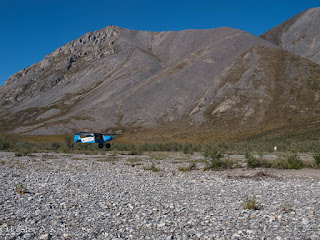 State Trooper/Warden flew in and landed on strip.  Good to know these guys are out here, they patrol enormous territories.  Hunting season open, he was out checking camps and hunter activity along river corridor.  There was a vacant sheep camp upriver.


Knocked down camp, inflated SOAR canoes.  Stowed and secured gear.  Paired off and started paddling late morning.  SOAR's pretty stable, not as responsive as a real canoe.  Learned hard way that bow paddler needed to paddle only when told to do so.  Sorry Kathleen.  Other than a few three-sixty's and occasionally going downriver backwards, we had no mishaps.  Patrice and Brent, Shelley and Henrik, no so joyfully swamped and experienced invigorating swims in the Kongakut.

Floated past a party of successful hunters.  Meat bags hung in bushes.

Eventually made it to next campsite without further mishap.  Nice spot. Numerous smooth, level sites to pitch tent.  Ewe and lamb Dall's sheep above camp.

Went back to camp, had dessert.  Crew had fire going.  Stunning views from porta-potty.

I was the only fisherman on the trip but most of the group was interested in learning to cast a fly. Good thing I packed two fly rods.  Tonight was Patrice's turn.


Moon rose between notch in mountains.  Beautiful.  A fitting end to the day.