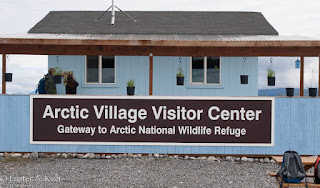 Day one, a day of transition.  From pavement to gravel.  Sounds of the city to the sound of silence. Water running from a tap to water running from its birthplace in the mountain headwaters of the North Slope.

Should backtrack.  Met trip participants previous night in Fairbanks.  Got dry bags for packing personal gear.  Went to dinner at Thai restaurant. Crew consisted of guides Mario and Kathleen, ski patrollers from Washington and Colorado, respectively.  Henrik and Shelley, newlyweds from Australia.  Brent and Patrice, marriage veterans from Ohio. Cheyne, a retired schoolteacher from Oregon.  Yours truly, skinny human from Montana.  That made for a party of eight.

Departed Fairbanks via Wright Air flight aboard Grand Caravan.  All of our gear and crew fit on plane. White Mountains were pretty, then came the expanse of the Yukon River lowlands.  Nice flight.  It's a pretty good haul to Arctic Village.

Unloaded gear.  Flight service would arrive with smaller planes later to ferry us to Kongakut.  Another

Wright Air sent two smaller craft to get us to the boonies.  Mostly clear.  Flight uneventful (always a good thing in the bush), only a few bumps.  Saw a few sheep and caribou from the air.  Said goodbye to trees before cresting Brooks Range.

Mario had arrived first.  He flew in directly from Fairbanks with a bunch of gear.  Rainfly and beginnings of camp were already set up when the crew started arriving. Everyone picked out sites for their tents.  That done, lunch was served.  Hummus, pita, coffee.

After dinner, we each got a bear canister for our stash of munchies, toothpaste and any other valuable and potentially odoriferous stuff that we didn't want to share with the aforementioned bears.

Hiked upriver to check out the fishing.  Got two char and four grayling on five weight using a stimulator (already described elsewhere in blog).

This was a pretty full day.