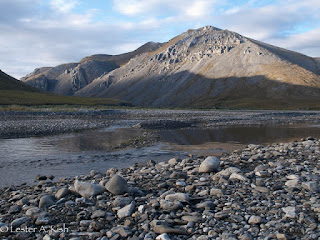 Previous days dunkings called for realignment of paddling partners.  Patrice and Kathleen.  Brent and me.  I got stern.  We eventually got the paddling routine sorted out.

Low water.  Lots of rocks.  Lined boats through several sections of river.  Made for slow going.

Arrived at rapid.  Pulled over.  Walked downriver to scout.  Rapid was more of a wave train.  Strategically poorly located rocks made for a challenging run.  Wave train no problem.  Easiest course was on river right.  Unfortunately, a rock wall with ninety degree left turn waited at the end.

Girls went first.  Caught wall with back third of canoe, bounced off and made it through ok.

We went next.  Brent pulled like hell, me too.  Hit wall anyway.  Learned not to throw elbow out at wall.

Mario and Cheyne shot through no problem.  Mario took course closer to river left.  Eased into eddy with big grin.  Show off.

Henrik and Shelley lined boat through.  A good decision.

From here, short run down to next camp.  Poplar starting to show colors.  Got rainfly and cooking area set up.  Mario and Kathleen did good job situating boats around fly to block wind.  Made for good backrest too.

Saw griz across river.  Spooked when it caught our scent.

Great dinner.  Penne salmon with sun dried tomatoes.  Along with about a pound of herbed butter and parmesan cheese.  Dessert and coffee.

Set up tent near cook fly.  Game trails everywhere.  Rest of crew camped on bench above, or upstream in willows.

Clouds had rolled in earlier in afternoon.  Crawled into tent with patter of raindrops on fly.  Hopefully tomorrow will be nice.  All in all, a satisfying day.  Tomorrow is a layover day.  Maybe a nice hike.

Fishing probably not in the works at this camp but that's ok.
Email Post
Labels: Alaska Kongakut River