The Greatest Outdoor Show (Ever)

Before the days of instant gratification, the internet, cable tv and the like, there was this thing called paper.  As a kid I remember leafing through Orvis catalogs and admiring bamboo fly rods.  There were Dan Bailey catalogs from a mythical place called Montana, a place that would later become my home.  Of course, these came in the mail, and it took awhile.  Getting a response necessitated scrawling out a letter on an 8 1/2 by 11 inch sheet of notebook paper, stuffing it into an envelope, and blowing a nickel on a postage stamp.  Weeks later, if the addressee didn't figure out that the letter came from a kid, they responded.  Getting a letter was a big deal.


On weekends I looked forward to shows like Walt Disney and Wild Kingdom.  We had network TV, there was no cable.   Outdoor programming was limited.  There was a show called the Flying Fisherman, hosted by an elderly gentleman(Gadabout Gaddis), who flew around the country and bought us fishing on TV.  I was thrilled.  Imagine, fishing on TV!  One episode, that I remember to this day, is of him fishing in Maine for squaretail (brook) trout.  I later coerced my parents into vacationing in the northernmost reaches of that state (I wrote the letter to the lodge requesting information).  We rented a "housekeeping" cabin (translation: mom did all of the work) on Eagle Lake for a week.  All I can say is that I must have been loved as a child, because my mom sure hated mosquitos.

Back then, life was simpler, more innocent somehow.  Hell, I was younger. It was before the days of whack 'em and stack 'em, high fiving, yelling and screaming, how many or how big, trail cams, gps and delivery pizza.

There was a real hunting and fishing show, beautifully done, and without all of the promotional considerations.  It was about great personalities and their sharing a common bond with the outdoors.  Early versions of the program were produced by and starred members of what has been referred to as the Greatest Generation, those of World War II vintage.  Hosted by Curt Gowdy, other show notables included Bing Crosby, Phil Harris, Joe Foss, Jimmy Dean, Joe Brooks, Lee Wulff.

That show was.... The American Sportsman.

I credit the show with planting the seeds for the desire to hunt in a boy who had no hunting mentors.  Hunting was not part of our family DNA.  Sure, when the Mongol hordes overran Hungary, some guy on a short legged pony might have hooked up with a distant female relative, but photographic proof is lacking. Fly fishing?  Heck, my father fished for carp in the Danube, with doughballs.  And, while my dad taught me how to fish, it wasn't Lee Wulff fishing for Atlantic salmon in Newfoundland with a ridiculously short bamboo fly rod.

Perhaps what I remember most are the introductory montage and the theme song.  Simple and haunting to this day, it was the epitome of the outdoor experience.

Come and share a world of memories
You will treasure throughout the years
There’s no way of comparing
What you’ll be sharing
Look at another world
Come share another world!

Unfortunately, later episodes yielded to political correctness.  Once the show strayed from hunting and fishing, the soul of the program was lost.  But, in its heydey of the 1960's, it contained what may have been some of the best hunting and fishing segments ever captured on film.  Certainly, it left a lasting impression on a skinny little kid from New Jersey. 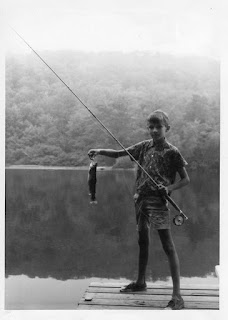