Seasons change with little regard to the calendar.  What should have been the official first day of autumn disguised itself as just another summer day.  Sometimes the seasons are just tardy.  Summer managed to hang on for a few more weeks.  Midweek, autumn noted that it was October after all and enough was enough.  Finally realizing the error in its ways it was ushered in by a north wind accompanied by snow and cold.

It doesn't seem right to walk the grouse woods on dusty trails with sweat running off ones brow.  This at ten in the morning.  Better yet the day be cool, the woods damp.  Better for walking, and hunting.

While the changing of the season is welcomed, its abruptness is startling.  One day its shirtsleeves, the next its fleece, a windbreaker, gloves and a hat.  Just for spite the day has enough bite to leave one wishing for even more clothing.  So it was yesterday.

We went for an afternoon walk with one of the dogs. I had hopes that the sun would eventually shine and warm things a bit.  Nope.  It was gray and breezy when we arrived at the trailhead.  Actually it was downright cold and raw. The stiff wind didn't help much either.

We hustled our way to the grouse coverts.

Snow cover on the ground revealed that others were walking the woods as well.  A solitary moose had made its way down the trail.  A marten seeking a meal of red squirrel had walked along a fallen tree.  I wonder if the squirrel knew that he was on the menu.  A few deer mice had scurried over the snow before their tracks disappeared into the brown patches of grass. Thankfully there were a few ruffed grouse tracks as well.


Some days the birds are pretty active and one gets several points and flushes.  This day they were a bit more scarce.  It seems that they change their habits when snow is on the ground.  Even a little bit of white makes a difference.  Maybe they leave the cool shadowy creek bottom in favor of the nearby drier slopes only to return if Indian Summer makes an appearance.


Eventually though, the dog got birdy.  Shot from both barrels of my wife's twenty gauge folded the rapidly departing grouse.  I know one shouldn't pick favorites but ruffs top my list of game birds.  They're perfect.  As was this one.  A crafty old bird, it had a big gray tail that contrasted with tawny breast feathers.  Both color phases neatly packaged into one beautiful bird.


Emma then found a complete pile of feathers at the base of a douglas fir.  Another predator had taken a grouse from this covert as well.

It got colder, Emma started to shut down and began to paw at the ground.  She was cold, wet, and tired and was telling us so by preparing a bed.  I offered her a few pieces of cheese from my pack while Jo dug out a dog vest.  Food and clothing is good for man and dog alike.  This helped the morale of the crew.

It was now late afternoon.  Time to turn around and hike out.

Along the way, squalls of snow came and went.  A few birds flushed and lived to flush again.  As it should be. 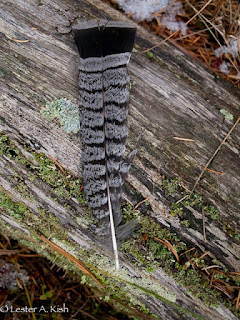