There are memorable moments in every day.  And, while some days have more than others, often one will stand out, define it if you will.

I took a short float yesterday.  My little pontoon had suffered a summer of neglect.  One last trip to make things right.  One more day of defining moments.

It was warm when I got to the river in early afternoon.  I worked up a sweat just airing up the pontoon.  Off came the long johns.  No need for fleece either.

The fish wasted no time showing interest in my fly.  Several made passes and grabbed at the stripped streamer, but no lasting connections were made.  One nice brown trout gave a few pulls before showing itself with a quick jump.  It then returned my fly.

Eventually the tables turned and fish stayed hooked.  Funny how these streaks happen.  Miss a bunch and then hook a bunch.  In one nice run where a back eddy seam met the faster main current a good fish showed itself.  Again, and again, and again.  It appeared and inspected the fly on successive casts but wouldn't commit.  Then he took a swipe. Next cast, same thing.  And then again.  I was convinced that I'd tickled him but he came back again and the hook stuck.  A big brown, finally.  Then he jumped. Make that a big rainbow.  Another jump, followed by one more.  Wow! I hooted and hollered to my non-existing audience.  Carefully I led the fish down to the boat and untethered the net.  Then I reached into the other bag for the camera.  I turned it on and removed the lens cap.  Ready to record the event, I grabbed the net.  In he came.  Just a little more.  Head up, just slide a little bit more.  Three feet, two feet, then one.  A shake of the head and he became a memory.  I think I'll ask for longer arms for Christmas.

The next run was a carbon copy.  Back eddy, seam, fast current.  I pitched the streamer into the sweet spot.  This time I twitched it slowly downstream.  Ah, the dying quail routine.  This fish didn't miss.  And in spite of my best efforts, he came to net.  Fall browns sure are pretty.  Their golds and brown color reflect the lingering warmth of autumn.


After a few fish I'm usually pretty satisfied.  And, while I fished a few more runs, I spent more time just admiring the scenery.  The river, the rocks, the dancing water. The drama that clouds add to a landscape.  Perhaps the last rain shower of the year and the resulting rainbow.  A bunch of mallards, several kingfishers, an osprey too.


Crows passed over the river and congregated in the same tree.  The mob was home to roost for the night.

And the colors, never enough. They would soon be gone.  Frost and wind would soon strip them from the trees.

The waning light of the sun setting on another season.  I can already feel it warming me this winter. 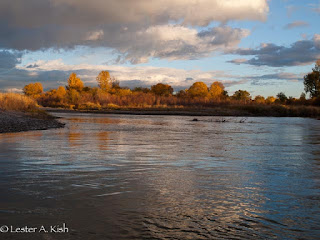